On this day 15 years ago, President Bill Clinton signed a sweeping overhaul of the nation’s welfare system that enacted onerous work requirements on poor families before they could collect government aid. The new law fulfilled Republicans long-held desire to (in the words of President Clinton) “end welfare as we know it” by creating the Temporary Assistance for Needy Families (TANF) “block grant” program.

The reform achieved its goal of reducing the number of families receiving federal aid: in the process, it also shredded America’s ability to help its neediest families during an economic downturn. The nonpartisan Center on Budget and Policy Priorities has released a series of charts illustrating that TANF has failed to keep pace with the needs of struggling American families, especially during this long and difficult recession: 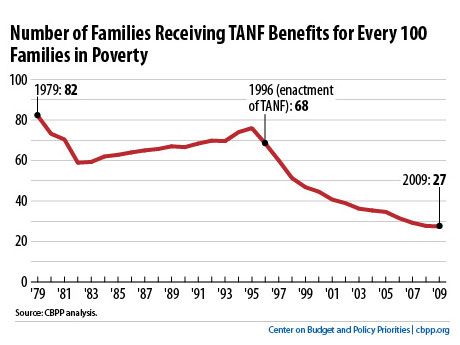 The number of low-income families receiving welfare has fallen from 68 percent in 1996 to 27 percent today. As the American Prospect’s Jake Blumgart noted, unlike the old system, which could respond to greater need when the economy went south, the TANF block grant program “provides an annual lump sum of $16.6 billion, with no allotted increases for recession, population growth, or rises in the cost of living.” It has even failed to keep up with inflation. In short, TANF’s ability to provide income support to those who need it most has declined dramatically.

Thus, during the worst recession in 80 years, TANF only reached 4.5 million families, or less than a third of those living in poverty. “By contrast, in 1995, the old welfare system covered 13.5 million families, or 75 percent of those living in poverty,” Blumgart wrote. The food stamp program — which does not face the same limitations as TANF — increased by 57 percent in 2009, in response to growing demand driven by high joblessness. As the CBPP’s LaDonna Pavetti, vice president for family income support, observed, “in the process of trying to impose very stringent work requirements, we’ve lost the program’s ability to provide a safety net for the people who are unable to find work.”