Yesterday, no one had lived in 702 Vermont Street for three years. Vermont Street sits in East New York, the Brooklyn neighborhood where foreclosures are five times more frequent than in the rest of the state. Today, Alfredo and Tasha and their son and daughter moved in, with the help of a number of friends whom they'd never met. Some were from the advocacy groups Picture the Homeless and Vocal New York, others were clergy or members of the city council. They had been organized and brought together by Occupy Wall Street for a national day of action to promote foreclosure resistance, an event kicking off a project they call Occupy Our Homes.

Alfredo, Tasha and the kids, way back yesterday, were homeless, having been foreclosed upon by a bank and hundreds upon hundreds of people who had never heard of them came to East New York today to get them a home. Occupy Wall Street is itself somewhat homeless these days, having been evicted from Zuccotti Park on the orders of the 12th-richest man in the United States. A few weeks ago, the media tycoon in question deployed what he openly calls his “army” to dispossess the occupation, including, naturally, everyone who called it their home. Much wondering has been going on in the press about what Occupy Wall Street would do now that it was homeless. Today's answer seems to have been: get other people homes. 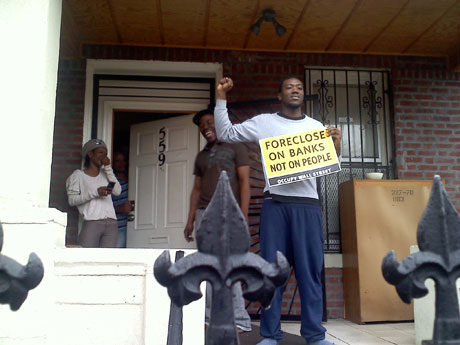 The few hundred activists marched through the streets of East New York and took a tour of the foreclosed properties in the area, which is very easy to do, since they are everywhere. “On every block, we have one or two homes either for sale or in foreclosure,” Lorraine, who lives in the neighborhood, told me. “I think we have three houses for sale on my block alone.” 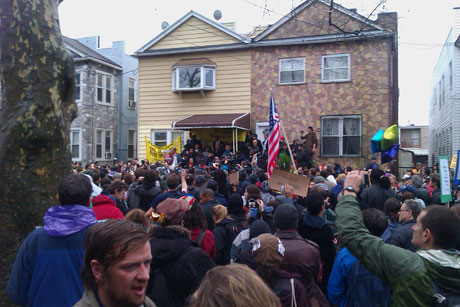 “There's nothing to do here,” said longtime East New Yorker Corinne Gonzales, who attributes the many people who watched the march from their windows to this. Revealingly, it was at their windows where people found themselves on a chance Tuesday afternoon in this neighborhood and not, perhaps, at work. Many of them joined the march, which, at its peak, swelled to what was widely estimated to include 1,000 participants – on a Tuesday afternoon in the rain.

Corrine had never seen anything like it. News cameras and satellite vans don't come here, except, occasionally, in the case of a shooting. Now, they'd come here to document the difficulty of a life of poverty and the attempt to change that dynamic. If Occupy Wall Street had chosen to do something else today, another day would have gone by in which no one in the media or politics paid any attention to East New York. 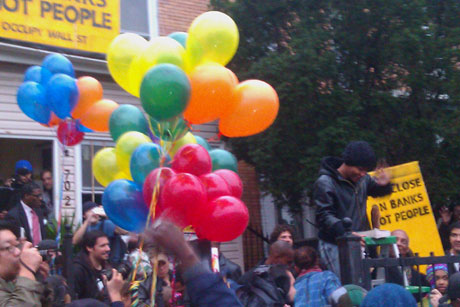 Some activists brought housewarming gifts for the new residents of 702 Vermont Street. Yates McKee, 32, marched carrying a large houseplant. “A plant is important because it's something that helps make it a nice environment,” he told me. “It's also a metaphor for sustaining life.”

Lorraine had brought brownies. She started a “part-time cooking thing” to make extra money before she lost her job. “They're free,” she said, offering me one. “It might energize you, with a little sugar. I have a sweet tooth.” These brownies were to welcome the activists who had come to help, though the baker herself faces foreclosure. “Any person at this point is one step away from being jobless and homeless,” she remarked. “It's a reality. This is the life that we're living right now. It's like this is what we worked for, all those other years. This is the point that we've come to.” 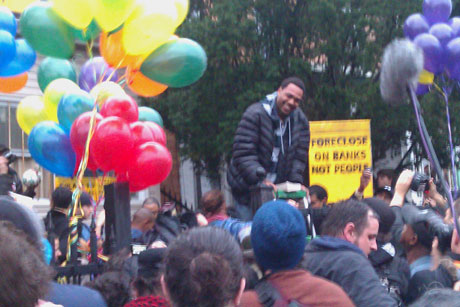 If anybody wanted demands, they were clear today. As Brian Gibbs of Picture the Homeless said by way of the people's microphone, “What we need is real, affordable housing now. It has to change.” Gibbs was once homeless on the street and spoke of the police harassment routinely visited upon him and others in his situation. “The problem with homelessness is that people get so desperate, they are willing to risk arrest in order to get off the streets,” he told the crowd.

At one stop along the tour, a young man named Quincy, who works as a part time plumber, took the people's mike. “I was tricked into signing over my deed,” he confessed. “Now I'm getting evicted. I have a loan of $475,000.” 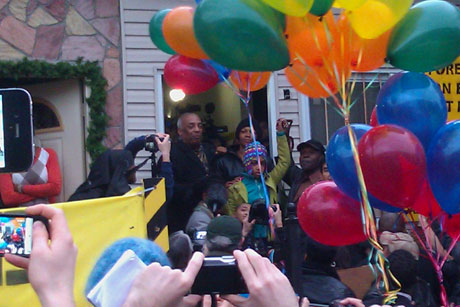 Standing beside him, his city council member, one-time Black Panther Charles Barron, announced, “We will not let this young man lose his home. We've stopped other foreclosures and we're going to stop this one.” Thereupon, Quincy began to weep, the friends and comrades he never knew he had gathering around him to place their calming hands upon his shoulders and his arms and his head. He didn't know they were out there, but 1,000 people ready to protect his home happened to be around the corner the day upon which he was getting foreclosed.

As Quincy wrapped up his remarks, a cry from the crowd drew everyone's attention to another longtime resident of the neighborhood, who told the story of having bought her house in 1997, putting $80,000 down. She'd been working two jobs all of her life and had paid her mortgage responsibly, putting down months in advance when she went on vacation. Her son did four years in Kuwait and four years in Iraq and now he's dead. The Pentagon, the woman said, doesn't know whether he died by enemy bullets or friendly fire. Since then, she's become sick and the bills for her medical treatment have ruined her hopes for paying off the rest of her mortgage. Crying to the sky, she asked again and again, “How am I going to do it?”

At the march's destination, balloons announced the block party to be thrown for the incoming neighbors. A tent appeared on the roof, on which was scrawled, “You cannot evict an idea whose time has come.” Remarks were shared by, among others, Alfredo, a 27-year-old community organizer around stop and frisk, and Tasha, whose shyness in the face of the people's microphone moved her to nervous giggles and a swift conclusion to her brief thanks.

I went into 702 Vermont Street with the Occupy Wall Street Sanitation Working Group, who entered before anyone else to get the house ready to be, so to speak, occupied. This was a formidable charge. It very much seemed to one as though the people who left 702 Vermont Street did so in a big hurry. Crumbled dry wall, copious mold, piles of refuse – the house might as easily have been Sarajevo in 1996 than in the same city as Wall Street in 2011.

The sun set over Vermont Street behind the clouds, steadily drizzling on the block party. Eventually, Bloomberg's army, consisting of quite a smaller number of people when there wasn't rich people's property to protect, asked the block party to stick to the sidewalk, and the event drew to a close, teams of occupiers agreeing to stay with Alfredo and Tasha and with Quincy for the night, vowing to put their bodies between the residents and anyone attempting to turn them into something else.

The police's boss has $19.5 billion. He's got places to stay all over the world, luxury townhouses in the swankiest neighborhoods in the finest cities in the world and sprawling mansions in lush paradises in the tropics. And no one ever threatens to kick him out of any of them. For the time being, anyway.