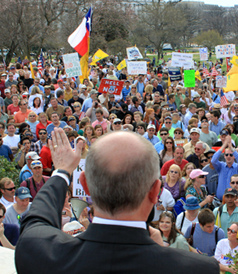 Next week starts the new Congress, and with it the Tea Party conservatives. What’s their strategy? What will they rally around?

They’ll grouse endlessly about government spending but I don’t think they’ll use any particular spending bill to mobilize and energize their grass roots. The big bucks are in Social Security, Medicare, and defense, which are too popular. And their support for a permanent extension of the Bush tax cuts will make a mockery of any argument about taming the deficit.

Nor will they focus on the debt ceiling. Their opposition to raising it will generate a one-day story but won’t rally the troops or register with the public. Most Americans aren’t particularly interested in the debt ceiling, don’t know what it means, and don’t feel affected by it.

Instead, I expect their rallying cry will be about the mandatory purchase of health care built into the new healthcare law. The mandate is the least popular, and least understood, aspect of that law. Yet it’s the lynchpin. Without it, much of the rest of the law falls apart: It’s impossible to cover all high-risk Americans, including those with pre-existing conditions, unless those at far lower risk are required to buy insurance.

Knowing they don’t stand a chance of getting a direct repeal of the mandate (even if they could get a majority in the House for it, they won’t summon 60 votes in the Senate, and have no possibility of overriding a presidential veto), they’ll try to strip the federal budget appropriation of money needed to put the mandate into effect. This could lead to a standoff with the White House over government funding in general, and a possible government shutdown.

My betting is Tea Party conservatives wouldn’t mind a government shutdown over the healthcare mandate. Unlike Bill Clinton’s showdown with Newt Gingrich, which hurt the conservative cause, Tea Partiers believe this one could be helpful. In their view, it would enable them to stand on principle, dramatize their argument that the Obama administration overstepped with healthcare, and generate a particular event around which they can summon the energy and enthusiasm of their ground troops — all with an eye on mobilizing for the 2012 general election.