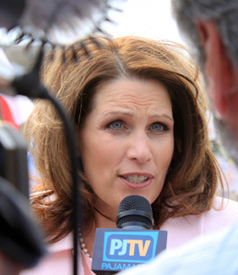 Congresswoman Michelle Bachmann (R-MN), head of the Tea Party Caucus in Congress, constantly dismisses charges about racism roiling within the ranks of the Tea Party, despite her fingerprints frequently appearing on racism-tinged stink bombs.

For example, Tea Party starlet Bachmann denies charges that racism is embedded in her demand made during a September Capitol Hill press conference for halting the long delayed $1.2-billion court-approved settlement to black farmers for documented discrimination by the US Agriculture Department.

Bachmann called for holding up that settlement, already stalled by US Senate Republicans, until a federal investigation examines her poorly substantiated claim of “massive and widespread fraud” in that pending settlement.

The report provides specific information on over a dozen such people including: Roan Garcia-Quintana of South Carolina, who the report states recently joined the board of America’s largest white nationalist group, the Council of Conservative Citizens; Texas Tea Party official Karen Pack, identified as being closely aligned with the KKK; Florida Tea Partier Peter Gemma, cited in the report for his history of anti-Semitism, and Virginia’s Larry Pratt, the executive director of Gun Owners of America, criticized in the report for frequently soliciting support from the Nazi-fawning Aryan Nation.

“Tea Party leaders have promoted and provided a platform to known racists and anti-Semites on multiple occasions,” states the report.

Numerous examples in the report showing the involvement of overt racists include a July 2009 Tea Party event in a Capitol Hill park where a Pennsylvania band “with a reputation for anti-Semitism” played music and provided “technical back-up” for that event. This band’s intolerance, the report noted, led to its banning from a 2007 campaign event for Congressman Ron Paul – often considered the Grandfather of the Tea Party movement.

The “Nationalism” report details how extremists use Tea Party events for recruiting opportunities and for spreading their messages of hate.

Significantly this report, prepared by the Institute for Research and Education on Human Rights of Kansas City for the NAACP, debunks many of the positions advanced by this overwhelmingly white, politically conservative, Republican-leaning movement, such as the claim that this Party’s sole focus is lowering budget deficits, taxes and federal government power.

“Tea Party ranks remain “permeated with concerns about race, and national identity and other so-called social issues,” the report states in its introduction. This Party’s “storied opposition to political and social elites turns out to be predicated on an antagonism to federal assistance to those deemed the “undeserving poor.””

One of Bachmann’s more infamous stink bombs was her charge during the closing weeks of the 2008 presidential campaign that minorities caused the nation’s mortgage foreclosure crisis because liberal Democrats forced banks to give mortgages to financially unqualified minorities.

Interestingly, at the time Bachmann made that utterly inaccurate assertion, her Minnesota congressional district…a district that’s overwhelming white… led that state in foreclosures. The highest black population in any of the six counties comprising Bachmann’s district is just 4 percent, with four of the remaining five counties having black populations of less than 2 percent.

That “Nationalism” report credits the Tea Party with resuscitating “the ultra-conservative wing of American political life,” yet it criticizes the Tea Party for having had “a devastating impact on thoughtful policy making for the common good, both at the local and state as well as at the federal levels.”

While Congresswoman Bachmann does not openly espouse white nationalist or anti-Semitic rhetoric like persons holding leadership roles in the six Tea Party factions examined in the report, she still bears “responsibility” for the racism expressed within Party ranks and for the role she plays in providing credibility for that Party through her GOP position, said Leonard Zeskind, co-author of the report and president of the Institute, during an interview with TCBH.

Bachmann also illustrates the way many conservative politicians seize on Tea Partiers’ ire to pander for support from that voting segment, but fail to address issues triggering that ire.

With that mortgage foreclosure crisis issue, Minnesota news media in 2008 detailed how Bachmann had failed to author or even sponsor any legislation to assist homeowners facing foreclosure, yet had voted against five key foreclosure relief bills. Those reports did cite Bachmann’s co-sponsoring of 14 bills to restrict abortion and five to promote Christianity in government.

That “Nationalism” report follows up on the NAACP’s issuance this past summer of a resolution calling on the Tea Party to address racism within its ranks. Bachmann and Tea Party ‘Momma Grizzly’ Sarah Palin both quickly blasted the NAACP resolution dismissing it as drivel from an organization that practices racism.

Jealous carefully noted that neither the report nor that civil rights organization is calling all Tea Party members racist.

“Most Tea Party members are sincere and of good will. We do not have a problem with the Tea Party’s right to exist. We have a problem when a majority of its members stand silent when they see racism,” said Jealous, an Ivy League graduate and Rhodes Scholar, during a teleconference with reporters that accompanies release of the report.

“For the past 100-years, the NAACP has challenged the Republican and Democratic parties on the issue of racism and now we challenge the Tea Party to stand for inclusion and basic civility.”

The “Tea Party Nationalism” report examining instances of extremism in that movement’s most active organizations produced denunciations from Tea Party officials, including one who termed it a cheap political shot attempting to “tie crazy people together with a movement that is not about what these people are about.”

Lloyd Marcus, a black Tea Party member, blasted the NAACP and the report on his blog.

“All of the racism is coming from the Obama camp,” claimed Marcus, a Tea Party event entertainer (singer) who is president of an anti-NAACP entity named the National Association for the Advancement of Conservative People of Color (NAACPC).

Lloyd Marcus insisted on that blog post that he’s never seen or heard overt racism while attending over 200 Tea Party events nationwide. “We tea party patriots are opposing Obama’s socialist agenda, not his skin color.”

A rarely examined element in the Tea Party phenomenon is the credibility obtained through the uncritical coverage the movement regularly receives from the mainstream media, said Jealous during a TCBH interview.

“Black America’s been in a recession for decades, long before this latest Recession. But the news media treats devastating circumstances confronting black Americans as no-news or old news, not the on-going problem that it is,” said Jealous, whose career includes stints as a newspaper editor in Mississippi and director of a national news service based in Washington DC.

“Hopefully, we can come together and see we’re all hurting now and find solutions that include jobs creation and enforcement of anti-discrimination laws,” Jealous continued.

Ken Ward Jr. covers the environment, workplace safety and energy, with a focus on coal and natural gas for the Charleston Gazette-Mail. Follow him on Twitter: @kenwardjr.