A group of artists marked the 20th anniversary of the signing of the North American Free Trade Agreement (NAFTA) on New Year’s Day with an art installation at the US-Mexico border that separates San Diego from Tijuana.

The installation, which involves 20 black flags – one for each year that NAFTA has been in effect – falls into a long tradition of actions and art pieces that protest US immigration and border policies.

The inauguration of NAFTA coincided with a dramatic increase in border patrol agents and the construction of a 600-mile border fence on the southern US border. As the artists point out on their website, free trade agreements like NAFTA allow capital to cross borders, but not people. 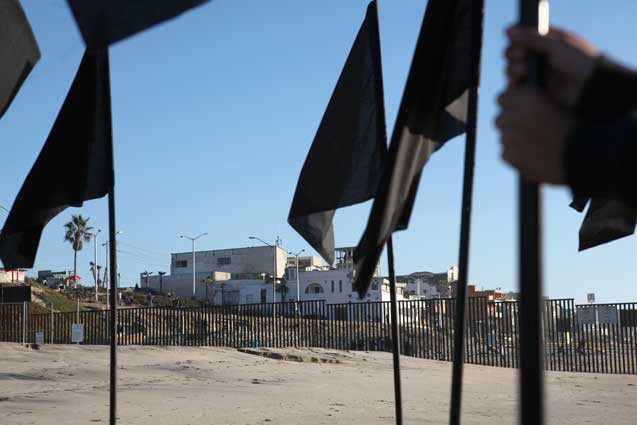 NAFTA intertwined the Canadian, Mexican and American economies, increasing inequality between the global North and South and adding incentives for migrants to enter the United States illegally. Since NAFTA was signed, the number of migrant deaths in the United States – Mexico borderlands has increased dramatically, and 463 migrants died in US borderlands in 2012 alone.

“The project is titled ‘A Future Memorial For NAFTA’ because it is meant both to reflect on the deaths that have occurred over the past 20 years, but also to create hope for the future death of NAFTA and other similar policies,” the artists said in a statement.

“One thing that really inspired us to do this action was how normalized this policy has become and how the death at the border has become so normal in the way that we imagine immigration policy and homeland security,” said Ian Alan Paul, one of the artists who worked on the protest installation. “We wanted to call attention to the large amounts of violence . . . that are a direct result of policies like NAFTA.”

Critics say NAFTA has also had negative impacts on the working class in Mexico and the United States. Under NAFTA, the United States suffered a net loss of 700,000 jobs to Mexico, as manufacturers took advantage of Mexico’s cheap labor and lack of environmental and safety standards. Mexico’s manufacturing sector did receive a significant boost from NAFTA, but labor unions and human rights groups point out that fair labor standards have either eroded or were simply nonexistent in both countries during the past two decades.