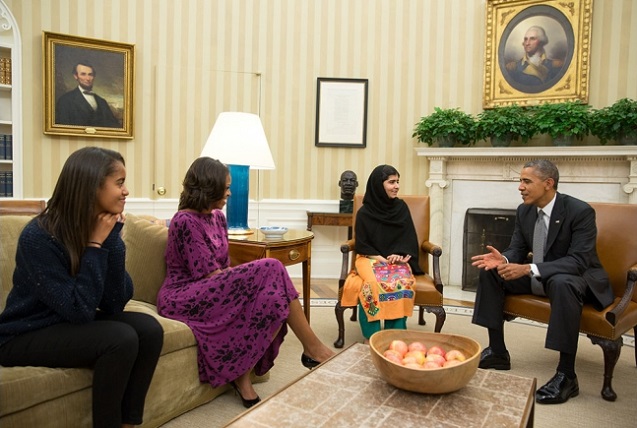 President Barack Obama, First Lady Michelle Obama, and their daughter Malia meet with Malala Yousafzai, the young Pakistani schoolgirl who was shot in the head by the Taliban a year ago, in the Oval Office, October 11, 2013. (Official White House Photo by Pete Souza)

President Obama and First Lady Michelle Obama met in the Oval Office Friday with Malala Yousafzai, the Pakastani girl who was shot in the head on her school bus by Taliban gunmen for criticizing their rule, including banning education for girls.

The White House says the first couple invited Malala — the youngest ever nominee for the Nobel Peace Prize — to the White House “to thank her for her inspiring and passionate work on behalf of girls education in Pakistan.”

In a statement, the White House says the United States “joins with the Pakistani people and so many around the world to celebrate Malala’s courage and her determination to promote the right of all girls to attend school and realize their dreams.”

In a statement released after the meeting, Malala said she was honored to meet with Obama, but that she told him she’s worried about the effect of U.S. drone strikes. (The White House statement didn’t mention that part.)

“I thanked President Obama for the United States’ work in supporting education in Pakistan and Afghanistan and for Syrian refugees,” she said in the statement. “I also expressed my concerns that drone attacks are fueling terrorism. Innocent victims are killed in these acts, and they lead to resentment among the Pakistani people. If we refocus efforts on education it will make a big impact.”

Malala was in Washington to address the World Bank.

The White House noted that Obama had said in a proclamation marking today as the International Day of the Girl, that “across the globe there are girls who will one day lead nations, if only we afford them the chance to choose their own destinies.”

The meeting was not on the president’s schedule and there was no advance notice, nor any press coverage.

Press Secretary Jay Carney had earlier said Malala’s “courage and efforts are remarkable, and the president absolutely honors them,” after ABC News’ Jonathan Karl asked him whether the Nobel committee “blew it” by giving the Nobel Peace Prize to the Organization for the Prohibition of Chemical Weapons, rather than Malala.

Carney said the award “reinforces the international community’s commitment to the international prohibition against the use of chemical weapons. “One of the President’s highest priorities is to prevent the proliferation or use of weapons of mass destruction,” Carney said. “And this award honors those who make it their life’s work to advance this vital goal.”

Donate Now
Share
© 2017 McClatchy-Tribune Information Services. Truthout has licensed this content. It may not be reproduced by any other source and is not covered by our Creative Commons license.
Lesley Clark