Police estimated up to 100,000 people turned out in Madison, WI yesterday to protest Gov. Scott Walker’s (R) assault on unions, making it bigger than any protests the city has witnessed, even those during the Vietnam War. The Madison rally is part of a much larger Main Street Movement of average Americans demanding fairness in labor laws, social spending, and taxation that has emerged in Ohio, New Jersey, Florida, Michigan, and elsewhere. But yesterday’s rally in Madison is noteworthy because at 85,000-100,000, it was bigger than the biggest tea party protest, the September 12, 2009 rally in Washington, D.C., which turned out only an estimated 60,000-70,000. A photo of the Madison rally yesterday: 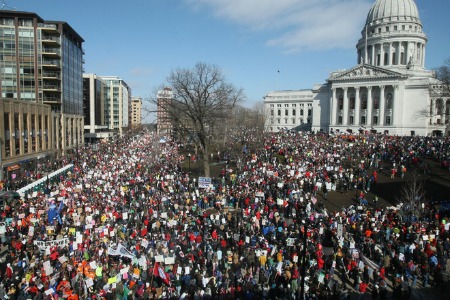 For two years, tea party activists and their allies in the GOP have claimed that the hard-right movement represents the true beliefs of the American people. But the crowd in Madison and numerous polls tell a different story.