Our first full day in Louisiana finds us venturing south from New Orleans to Houma, a town about an hours drive to the southwest. It is from here we are to take a flight over the marsh to inspect the damage, thus far, caused by the ongoing BP oil catastrophe.

Walking into the office of Butler Aviation Services at the airport, the downtrodden mood, and accompanying anger, are palpable. Of course this is not assisted by the fact that Vice President Joe Biden is visiting Louisiana today.

“What would you tell Joe if he walked into your office,” Robbie Butler, with the flight service of his name, asks me. He then adds, “Hey Joe, lead, follow, or get out of the way. That’s what I’d tell him.”

At approximately the same time Butler is telling me of these three excellent suggestions, Biden is in downtown New Orleans inside the “command center” meeting with more than 100 BP, government and military officials inside a cavernous office dubbed “the bullpen.” In case anyone wasn’t clear about the priorities of the US government, included in Biden’s entourage are BP’s chief operating officer Doug Suttles, and Louisiana Gov. Bobby Jindal. It was Jindal who, on June 2nd, sent an urgent letter to President Obama and Interior Secretary Ken Salazar regarding his grave concerns at the time of the administration’s decision to place a moratorium on deepwater drilling.

The lead paragraph in that letter made it very clear how Jindal’s concern is not with the ongoing catastrophic loss of ecosystems, or even the fisherpersons of his state, but with placating big oil. His letter begins:

“Dear President Obama and Secretary Salazar:
I am writing to express my grave concerns regarding the severe economic impact of a six-month (or longer) suspension of activity at 33 previously permitted deepwater drilling rigs in the Gulf of Mexico, including and in particular the 22 deepwater drilling rigs currently in operation off the Louisiana coast.”

But thanks to an oil-backed judge doing away with said moratorium, and another Obama move regarding offshore drilling, Jindal need not have lost any sleep.

On June 18 Obama administration officials, despite President Obama’s promises for better safeguards for offshore drilling, approved plans for oil companies to drill in the Gulf of Mexico with minimal or no environmental analysis. Since Jindal’s letter on June 2nd, the Department of Interior’s Minerals Management Service has signed off on at least five new offshore drilling projects.

After an hour-long briefing in “the bullpen,” Biden was impressed with what he saw.

“I don’t think the American people have any idea” how many resources are being used to fight the spill, he said.

Butler, on the other hand, along with most folks in southern Louisiana, is not as impressed. He’s been flying people, nearly every day since the disaster began in April, over the affected areas. He begins telling me about what he is seeing.

He looks outside the window at storm clouds forming to our south, then looks back at me.

“There’s no end in sight,” he says sternly, looking deep into my eyes.

Butler Aviation does most of its business as a taxi service, ferrying people around the Gulf coast region, and their business, like that of most businesses in Louisiana now, is down. Way down.

And Butler Aviation is not alone in feeling the pinch. The US Small Business Administration is turning down 70 percent of Louisiana companies that are applying for Gulf oil disaster relief loans.

As though fate chose to underscore the vacuous remarks of the Vice President, on the front page of today’s Times-Picayune of New Orleans is a story about how US government bureaucracy is preventing large numbers of oil-skimming boats from reaching the Gulf of Mexico. For more than a week federal response officials have been pressed to streamline US maritime restrictions that would allow more foreign skimming vessels to be put to work in the Gulf.

As an example, the oil giant Shell is in negotiations to allow BP to use its 300-foot oil recovery boat that is sitting idle in Seward, Alaska. But in recent weeks, BP has declined to bring it to the Gulf.

“Nothing would prevent it from working right now in the Gulf of Mexico,” states Curtis Smith, a spokesperson for Shell Alaska, “It remains available in the event that BP reconsiders.”

We go outside and meet Charlie Hammond, our pilot who is to fly us. Charlie has more than five years in the air, literally, with more than 45,000 hours of flying time. He’s been flying this area that encompasses the Mississippi Delta most of his life.

It turns out, due to a combination of growing storms and Biden’s visit temporarily blocking off air travel over some of the area we are to fly, we have to postpone our plans for aerial photography. Nevertheless, Charlie spends some time showing us on a map how much of southern Louisiana, existing on what is the massive delta of the Mississippi River, is vanishing before his eyes.

I learn that due to a combination of part of the Mississippi River having been diverted (thus stopping the natural regeneration of land from silt deposits), oyster beds being depleted in the past, oil-production infrastructure causing erosion of wetlands, and now oil from the new disaster destroying marshlands, the Cajun coast is the fastest disappearing landmass on Earth. In fact, every 30-minutes sees an area the size of a football field disappear into the Gulf of Mexico.

“I’ve seen large areas of this land, and many islands, disappear in my time,” he says, his white hair blowing in the wind, “We’re living on a dying delta.”

He goes on to describe how when he flies over the marsh that has been soiled in BP’s oil, “It looks like it’s been hit with a blow-torch.”

After visiting with Charlie, we decide to drive further south to Grand Isle, one of the areas in the state that saw some of the first oil born of the volcano gushing from the bottom of the Gulf of Mexico.

Trees disappear as we travel southward and the marsh extends from the road into the grey horizon. Green areas of marsh appear as though they are floating atop brown waters as we pass through small towns along the way.

In one of these, on a sign outside of Austin’s Fresh Shrimp shack, is another sign that reads “Shut Down Due to BP.”

In another town a US flag flies at half-mast.

Down in Grand Isle, a small town right on the edge of the Gulf of Mexico, signs of local discontent abound. 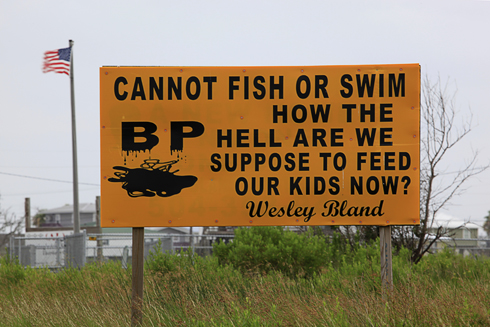 We come upon a sort of make-shift cemetery for “All that is Lost.”

My partner Erika promptly becomes immersed in taking photographs of the rows of white crosses, as each symbolizes some part of the culture or wildlife that has been decimated by this ongoing, growing catastrophe that threatens to annihilate the entire Gulf of Mexico if it is not stopped.

A large cross stands out front of the rows of smaller crosses. Upon it is written, “Our Soul.” In the background stands several empty crab traps arranged in the form of a cross. 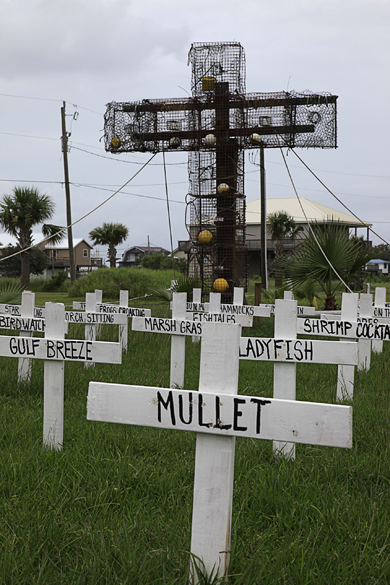 Later, as we drive back north towards New Orleans, I feel a seething rage towards BP and the US government. It is easy to vent my frustrations towards this giant oil company with the worst safety record on the planet. It is easy to rage at the US corporate-controlled so-called government. They are both easy targets for our rage.

I also think of my own hypocrisy, and how much gasoline we’ve used whilst driving today. I think about how riding my bicycle around my small town, composting and growing our own vegetables is not enough. I watch darkening storm clouds, full of rain, while I wonder what else I can do. And I think about how, with enough collective will and passion, we could use this growing tragedy as a pivot point towards weaning ourselves off fossil fuels.