You cannot make stuff like this up. New Jersey, in its attempt to diffuse a pension fund scandal that implicates Chris Christie (it roused him to respond in public), looks to have committed the classic crisis management blunder of a cover-up worse than the original crime.

International Business Times reporter David Sirota has been putting questionable relationships between state pension funds and Wall Street under the hot lights. One of the objects of his scrutiny has been the New Jersey pension fund, which is seriously underfunded. A recent tally puts it at number 43 out of 50 states in the level of its pension funding, with only 60% of its commitments funded. The New Jersey shortfall is the result of a series of classic blunders, starting with a decision to starve the pension system in the 1990s under governor Christine Todd Whitman.

New Jersey dug its hole even deeper during the crisis, by taking risky bets right before the markets unraveled, including investing in Lehman shortly before its collapse.

This bad situation was made worse under Christie. As we wrote in 2011:

A more accurate rendition would be that, at least in New Jersey, the state has been raiding the pension kitty for over 15 years. This is not news to anyone who has been paying attention, any more than underfunding of corporate pensions. In the Garden State’s case, Governor Chris Christie skipped the required $3.1 billion pension fund contribution last year. He claimed this move was to force reform, but what impact does another $3.1 billion failure to pay have on an unfunded liability that was already over $50 billion?

Fast forward to the Sirota investigation. Sirota showed how Christie shifted fund allocations to managers of “alternative assets” like hedge funds and private equity funds, which charge vastly more in the way of fees than simple stock and bond funds. It should be no surprise that hedge and private fund managers are heavyweight political donors. The result was more fees to the managers and underperformance for New Jersey. As Sirota wrote:

Gov. Chris Christie’s administration openly acknowledged that more New Jersey taxpayer dollars were going to land in the coffers of major financial institutions. It was 2010, and Christie had just installed a longtime private equity executive, Robert Grady, to manage the state’s pension money. Grady promoted a plan to put more of those funds into riskier investments managed by Wall Street firms. Though this would entail higher fees, Grady said the strategy would “maximize returns while appropriately managing risk.”

The “maximized returns” have yet to materialize… Had New Jersey’s pension system simply matched the median rate of return, the state would have reaped roughly $3.8 billion more than it did between fiscal years 2011 and 2014, says pension consultant Chris Tobe.

Unfortunately, it is all too common for pension fund systems to swing for the fences when they are in trouble and commit even more money to supposedly higher return investment approaches like private equity. In fact, due to too much money flooding into these strategies, returns for both hedge funds and private equity funds have generally lagged stock market returns in the post-crisis period.

On top of that, New Jersey’s authorized allocation to alternative investments is a full one third, a stunningly high level. Even CalPERS, a long-standing investor in alternatives, has less than half that level committed to these strategies.

But in New Jersey’s case, there’s even more reason than usual to doubt that the motivation for the shift to riskier investments was due to desperation to catch up, as opposed to rank corruption. After all, Christie’s professed strategy has been to worsen the crisis at the pension fund. What better way to achieve that result than to invest the money indifferently in high fee strategies, and get the side benefit of currying favor with extremely well-heeled donors?

Now, under heat for the suspicious-looking shift to Wall Street firms combined with embarrassing underperformance, New Jersey is suddenly reporting higher results as if no one would notice the change. On Friday, Sirota published a new scoop: New Jersey is now saying its pension fund returns for 2013 are a full 1% higher than previously announced. As Sirota writes:

Facing an ethics complaint after disclosures of the state’s below-market pension investment returns, Gov. Chris Christie’s top economic officials defended themselves by declaring that they delivered 16.9 percent returns in fiscal year 2014. Yet only weeks ago, the Christie administration reported the returns were 15.9 percent — lower by more than $700 million.

The discrepancy surfaces amid intensifying criticism of the Christie administration’s decision to triple the amount of pension money invested in high-fee private equity, venture capital, hedge fund, real estate and other “alternative investment” firms — many of whose employees have made financial contributions to Republican organizations backing Christie’s election campaigns.

In an op-ed published in the Newark Star-Ledger on Friday, the two top officials of New Jersey’s State Investment Council, Robert Grady and Thomas Byrne, criticized the investment strategy proposed by investors such as Warren Buffett, who say pension money should be primarily in stock index funds, not in alternative investments. Defending New Jersey’s $20 billion bet on alternatives, Grady and Byrne declared that “in the fiscal year ended June 30, 2014, the pension fund achieved a return of 16.9%.”

“The July 22 release says the fund produced returns of 15.9, according to preliminary data compiled as of June 30, 2014. Now final audited results showed the fund returned 16.9 percent,” Christopher Santarelli, from the New Jersey Department of Treasury, told International Business Times in response to a request for comment about the differing numbers.

This sort of revision is unheard of. Remember, even with New Jersey, over 2/3 of pension fund assets are invested in stocks and bonds. Those valuations are unambiguous. Similarly, hedge funds are required to provide valuations (so-called “net asset values”) monthly, with those figures verified by third party appraisal firms. The stock, bond, and hedge fund results come in shortly after month-end; there’s no basis for revision after the fact (put it another way: a change in valuation for any of these types of funds, even if favorable, would warrant withdrawing funds as soon as possible, because it would be proof of serious deficiencies in controls and accounting at the fund manager).

So the only types of investments where results are less clear-cut are in private equity, venture capital, and other illiquid strategies where the fund managers rather than third parties provide the valuations for their investments.

But even here, those managers have other investors in their funds besides New Jersey. They calculate the net asset value across the entire fund and then give valuations to investors based on their percent participation. So if New Jersey was getting revised valuations for such a large portion of its funds, you’d expect some other public pension funds to report significant upticks as well. But New Jersey seems to be suspiciously unique in this regard.

To understand how implausible this miraculous 1% performance improvement is, let’s look at New Jersey’s current asset allocation, as of June 30: 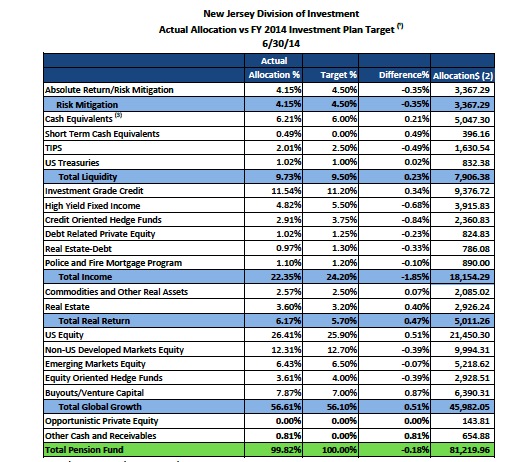 We will charitably include “Commodities and Other Real Assets,” “Real Estate Debt,” and “Real Estate” in the not-independently-valued funds for the purpose of this back-of-the-envelope calculation.

If you total Debt Related Private Equity, Real Estate Debt, Police and Fire Mortgage Program, Commodities and Other Real Assets, Real Estate, and Buyouts/Venture Capital, you get 17.13%. Remember, the total that is not independently valued is almost certainly lower.

The 1% miraculous improvement in performance is attributable to at most 17.13% of the portfolio. That is tantamount to that portion of the portfolio producing returns that were at least 5.8% higher than initially reported. That is simply not plausible.

We have to believe either that New Jersey is utterly incompetent at record-keeping, which would be a violation of its fiduciary duty, or something stinks to high heaven. It’s not hard to guess which is more likely. Since the Supreme Court ruled in 2008 that the Second Amendment includes the right to bear arms in self defense, guns rights advocates, led by the NRA, have…