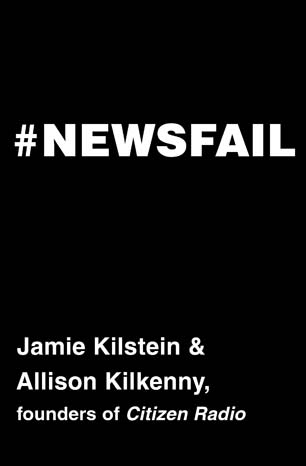 (Image: Simon & Schuster)The following is an excerpt of #NEWSFAIL.

There were many points at which security could (and, in retrospect, should) have stopped us from entering MSNBC.

For starters, we are both covered in tattoos, neither of us possesses particularly sophisticated sartorial tastes, Allison sometimes has accidental “death stare,” and Jamie often mistakes creepy for charming. We may have also had the wild-eyed, sweaty demeanor of newly liberated podcasters, recently escaped from an internet radio network that had asked us to take on Big Business sponsors – something we had strictly sworn off.

You see, the authors had aspirations of being pristine angels of independent media, untouched and unsullied by corporate cash. We would be the people’s media – that was the whole idea behind the name of our show, Citizen Radio. There was also the fact that no sponsor in their right mind would touch our show, but phrasing it the first way made us feel better about ourselves.

That concept of being sponsor-free hadn’t flown with the people who, ya know, we were supposed to be making money for. Say, our former boss.

Our whole career up until that point had essentially been managers, agents, and other boss-types saying, “We love you because you are political and edgy!” Then, once they see what that nightmare actually entails, adding, “Hey, could you not be political or edgy? But everything else, we LOVE!”

Case in point: during a time when we were covering the 2007 NSA warrantless surveillance controversy, our former boss asked us to take on AT&T as a sponsor. Mind you, at the time AT&T was being sued over allegations that the company provided the NSA with its customers’ phone and Internet communications as part of a vast data-mining operation, so to us it seemed a bit like a conflict of interest.

“This is Citizen Radio saying, if you are going to be spied on, be spied on by the best: AT&T! They’re always listening!”

That’s when we decided to walk. We didn’t need a network or bosses. We were going to be free and supported by our listeners! This was the first day of our triumphant escape from the milieu of servitude. No one would dictate what stories we could and could not cover. No one would censor us!

The only problem was: no one knew us. No one knew what Citizen Radio was. Then, we had a brilliant idea. We would get some big names to appear on the podcast as guests to drive up traffic. Sure, no one knew who the hell Allison Kilkenny and Jamie Kilstein are, but have you heard of a little lady named Rachel Maddow? Huh?? Have you?!

That’s what we thought.

Thus, in order to flee the belly of the beast, we found ourselves entering its lair. Corporateville. Sucktown. MSNBC. Mainstream media.

Sure, it was the liberal arm of the giant, but it was still the very thing we were trying to escape. This was sort of like if Code Pink hired General Petraeus as their PR person.

Regardless, Maddow was nice enough to invite us to a taping of her show and to sit down for an interview with us afterwards.

NBC studios at 30 Rock is located inside a beautiful building that was constructed to make you feel upon crossing its threshold like a failure who will never amount to anything. Or that’s how we felt walking in, anyway. Everything is sleek surfaces and severe right angles. The carpet is printed with millions of small NBC peacocks, mocking your very existence. They seem to say, “Welcome to the real show, stupid podcasters!”

This was back in 2010, when MSNBC had recently granted Lawrence O’Donnell his own spot following Maddow. In fact, he was set to debut his show that very evening. Allison was dismayed at this news. From the first moment she laid eyes upon Mr. O’Donnell’s face, Allison has always harbored a general mistrust of him. Maybe it was because of the MSNBC commercials where he’s seemingly annexed a grade school classroom, occupied it and refused to leave, and is now mansplaining life to his audience. Allison always imagined a class of third graders just out-of-frame, noses pressed to the door, their cries muffled as they plead, “Can we come back in yet, Mr. O’Donnell??”

Maddow’s studio is a state-of-the-art thing of beauty. The three cameras that film the show are robotic and glide around the lacquered floor in an intricate ballet. For comparison, our current studio is located inside our apartment and our equipment comprises a laptop, microphones, and a blue kid’s table from IKEA that cost $20. When we have a guest over, instead of having an unpaid intern who offers them a cappuccino, we have Jamie who offers them a Zyrtec because “if the cats don’t come in the office, they throw a real fit. This will help with the sneezing.”

As an observer at MSNBC, you feel like a big clumsy ape in the robot cameras’ presences, relocated to the side of the set on one of three chairs propped up on a platform, desperately trying not to do anything that will fuck up this awesome high-tech choreography.

Jamie glared angrily at the cameras. Citizen Radio is an extremely low-budget affair (remember: IKEA table), but especially so in the early days, when we recorded the show on our cell phones. Both hosts (i.e. us) called into the same number and a soundboard on the internet would record the show. It’s cool in the sense that anyone – literally, anyone – can create their own show, and we thought, hey! We’re anyone! Let’s make a pretend phone show!

The only problem was, if the hosts stood too close together, there was massive feedback. This resulted in some highly awkward moments like when Allison and Jamie were interviewing then-presidential candidate Ralph Nader, who was under the impression he was on a real show.

Nader gave a compelling answer to some question, and thrilled, Jamie flew back into the main room to give Allison an enthusiastic thumbs up, which is when feedback tore through the room, and Allison whisper-shouted, “GET BACK IN THE BATHROOM!”

Jamie conducted the rest of the interview squatted in the bathtub and Mr. Nader probably realized he’d made a terrible mistake.

MSNBC doesn’t have to deal with these kinds of problems. When Chris Matthews’ ear piece goes out, he doesn’t look over to Thomas Roberts, who is happily giving him the thumbs up, and have to scream, “Back in the tub, Roberts!”

Jamie was having Nader-related flashbacks and was convinced he was going to somehow mess up The Maddow Show. The show is live and he has a track record of ruining quiet moments. Earlier that year, he accidentally pocket-dialed his brother during his family’s Passover prayer. His family is still mad about that to this day. Seriously.

When you get on set at Maddow’s show, guests are hooked into a sound pack so they can hear the whole show, including the video clips Maddow plays throughout the hour. The pack is fixed to the waistband of the guest’s pants and a cord extends upward to an earpiece. Then, the entire apparatus is attached to the chair. Other than the mouth-breather guests, the studio is virtually empty: just Rachel Maddow, a producer, and chairs.

Jamie did a frantic checklist. For example, he made sure his phone was off, so no one would hear his ring tone (Glee’s “Don’t Stop Believing) during Maddow’s Don’t Ask, Don’t Tell segment. And as if he wasn’t stressed enough, now the authors were strapped to chairs, perched atop a tiny ledge.

It’s the worst place in the world to, say, have a spasming coughing fit. Unfortunately, that’s exactly what happened to Allison, who desperately tried to remain quiet by muffling her distressed wheezing into her hand as though one of the robot cameras might come to life and attack her.

Jamie stared in shocked disbelief, not only trying to figure out what the hell to do, but also because it wasn’t his fault! He wasn’t the embarrassment! Allison was the responsible one. She’s the one who drives to the emergency room, while Jamie is the one who asks, “How much blood can you lose before you die?!”

The harder she tried not to cough, the worse it got. Knowing she was about to experience an epic coughing fit, Allison darted off the platform, completely forgetting she was anchored to the chair. She would have torn it completely off the stage and fallen through the curtain had it not been for Jamie grabbing the chair as it flew past him. Allison quickly untangled herself from the sound pack, parted the curtains that led to the main floor of the studio, and nearly ran headfirst into….

Allison almost clotheslined the guy set to debut his show that night, while projecting mucus all over his face, which in a weird way, is kind of a perfect metaphor for Citizen Radio. As cool as their elevators are, as nice as it would be to have a staff, or an office, or ROBOTS, it was clear this whole establishment media thing and us would never work. Even when we’re somehow accidentally on the inside, we always manage to fuck shit up.

Jamie Kilstein is a stand-up comedian, who has been featured on The Conan O’Brien Show, Showtime, Up With Chris, Countdown with Keith Olbermann, and NPR’s Weekend Edition. One time, Glenn Beck called him a doofus, which is the nicest thing anyone has ever said to him.