In an online post titled “Self-Serving Myths of Europe’s Neo-Calvinists,” Ambrose Evans-Pritchard, an editor at the British newspaper The Telegraph, sends us to a very good essay from the Centre for European Reform warning of the consequences of relying on the “North European interpretation” of the euro zone crisis, which “essentially sees the crisis as a morality tale, pitting those who sinned against those who stuck to the path of virtue.”

The authors, Simon Tilford and Philip Whyte, write: “The major sins of the periphery were government profligacy and losses of competitiveness. The way out of the crisis, it follows, is straightforward. It is to emulate the virtuous core by consolidating public finances and improving competitiveness (by raising productivity, reducing wages, or both). If the periphery can achieve this, then the euro zone debt crisis can be resolved without an institutional leap forward to fiscal union.”

Regular readers know that this theme is something I’ve been playing for a while now. My analysis is pretty close to Mr. Tilford and Mr. Whyte’s; let me restate it.

The basic story of the euro so far is that the introduction of the currency, by creating a false sense of safety, led to large capital flows to and correspondingly large current account deficits in the southern European nations: Greece, Italy, Portugal and Spain (Ireland’s is a somewhat different, though related, story, which I won’t take on here.) See the summary picture on this page. 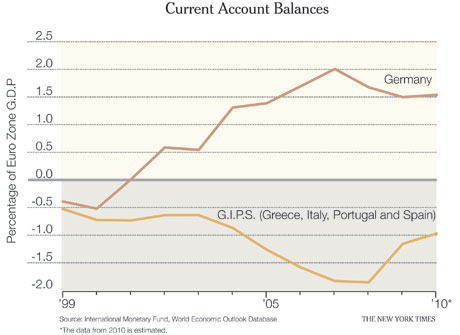 Now these imbalances need to be unwound. As anyone who has studied international macroeconomics can tell you, this requires two things. First, it requires a redistribution of spending, with the creditors spending more while the debtors spend less. Second, it requires a real depreciation on the part of the debtors, and a real appreciation on the part of the creditors — that is, wages and prices in the G.I.P.S. must fall relative to those in Germany.

But the official policy of the euro zone’s leaders is that this adjustment should be entirely one-sided. Spending must fall in the debtors, but there will be no offsetting expansionary policy in the creditors — so the thrust of policy is entirely contractionary for the euro zone as a whole. At the same time, the European Central Bank is committed to very low inflation at the aggregate level, which means that real exchange rate adjustment must take place mainly through deflation in the G.I.P.S., which is both very difficult and has the effect of raising their

Even with unlimited political will, this would be a recipe for prolonged recession and stagnation in Europe. With political capital limited in practice — watch Spain’s new government quickly become just as unpopular as the old one! — it’s a recipe for catastrophe.

No wonder the eurocrats placed their faith in the confidence fairy. But she’s not coming.

It would take a radical reversal of course to save this thing. And, so far, I see no willingness to face up to that necessity.