This Pesach (Passover), young Jews across the United States under the banner of IfNotNow are calling for a sea change in American Jewish consciousness and an end to American Jewish support for the Israeli occupation. On April 19, I stood with 100 young American Jews in the office lobby of the American Israel Public Affairs Committee (AIPAC) to say we support freedom and dignity for all Palestinians and Israelis. This week, in New York, Boston, Washington, DC, Chicago and San Francisco, hundreds of young American Jews are holding ritual protests and getting arrested to say we have had enough. I feel the yearning of a generation to tell a new story of what it means to be Jewish. 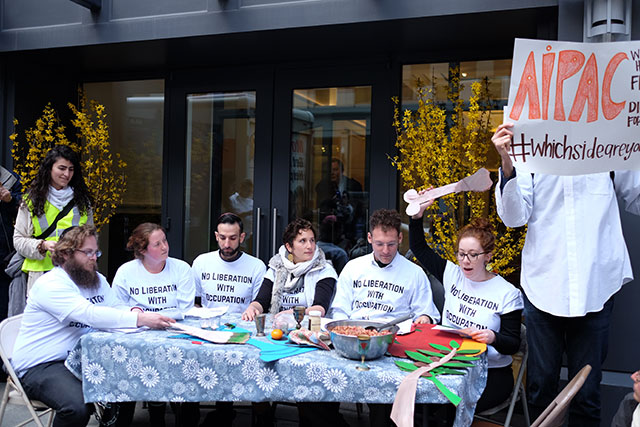 Standing with this community, I feel a call to end my own silence. I used to think of myself as brave, speaking what is tacitly left unsaid, writing poetry about queerness and anger, war and assimilation. But as I’ve grown into adulthood I’ve felt the corners of my jaw ache as I keep my mouth shut to stop the words of dignity and occupation rising in my throat from pouring out. And it has been painful.

I am surprised, but more to the point, I am disturbed. How did my voice dim and my jaw tighten and my hands begin to hesitate? These lessons in silence are learned; and most devastatingly, I learned them from the place that once taught me to know myself by the power of my own voice: Judaism.

I feel a call to reawaken my voice.

The institutions that raised us have betrayed us. They have taught us bravery and then asked for silence in return.

Hebrew school encouraged dispute and dialogue, introduced me to my first lover and girls making sisterhood. When I was a teenager, Jewish institutions hired me as a teacher, empowering me to believe in my capacity. My synagogue encouraged me at the age of 15 to read a Shabbat sermon about the unbelievability of God. They gave me a monogrammed copy of The Jewish Book of Why on the day my brother and I became bnai’ mitzvah. 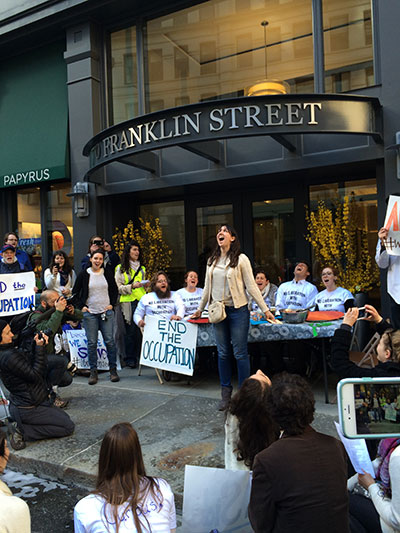 An IfNotNow member leads a collective scream during the action. (Photo: Michelle Weiser)But my synagogue also put up a “We Stand With Israel” sign and taught me that to be American and Jewish meant to unquestioningly support a nation engaged in violent oppression and occupation.

The “We Stand With Israel” signs — and the authority behind them, which is far larger than my individual synagogue — are a defense against the increasingly warranted critique of Israel’s brutal military occupation and systematic disenfranchisement of Palestinian people. And that defensiveness makes sense for a people with a history of persecution and suffering. It makes sense for Jews to feel scared. The signs are an attempt to protect unity and strength and resources.

But defensiveness, and the silence it requires, is not a way to heal. It is a way to dam the waters of a conversation that needs to be central to modern Jewish life.

IfNotNow is a movement that lets the waters flow. I am in this movement because I need to speak and transcend the impulse to use silence as armor.

Yesterday, as I stood with IfNotNow and said, “Dayenu, It has been enough,” I thought about Mitzrayim, the Hebrew word for Egypt. I thought about how it means the dark and narrow place. I imagined the slaves who left Egypt in the middle of the night carrying what they could of their possessions and their children on their backs. I imagined the joy and the luminous sense of possibility to be walking out of bondage. 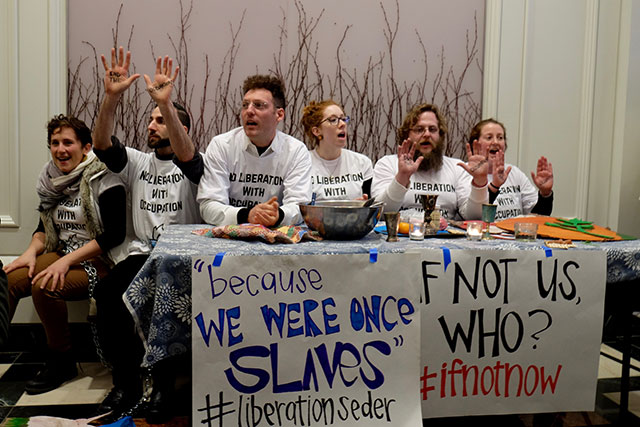 Six IfNotNow members chained themselves to a ritual seder table in protest inside the office lobby of AIPAC. (Photo: Sam Boaz)

But I also imagined the gut-wrenching sense of fear. I imagined a community of people walking away from everything they had ever known and how disastrous the present must have felt in order to risk stepping into a desert of total uncertainty. In the Pesach story, the present disaster was slavery. As modern Jews, we again face Mitzrayim as we acknowledge the disaster of a Judaism associated with war, violent occupation and communal silence.

Choosing to walk through the dark and narrow place means choosing freedom and dignity for all — including Palestinians, Israelis and American Jews.

We have a choice to make. Choosing to walk through the dark and narrow place means choosing freedom and dignity for all — including Palestinians, Israelis and American Jews.It also means choosing total change. When the American Jewish consciousness, and the institutions that claim to represent us, choose this, a vibrant Judaism can be reborn. This risk will be rewarded, as we know a true freedom that does not rely on the bondage of others. 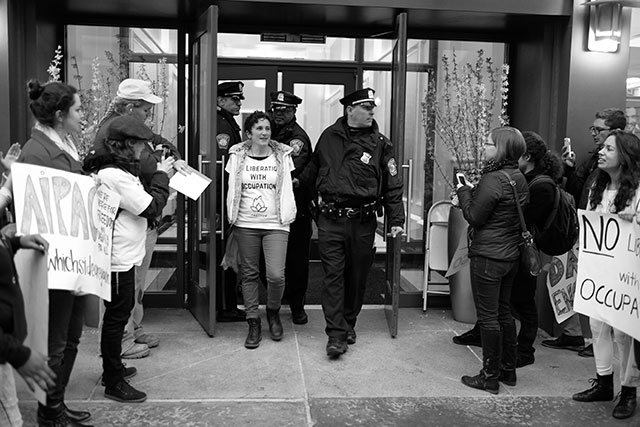 An IfNotNow member is arrested for chaining herself to a ritual seder table inside AIPAC’s office lobby. (Photo: Sam Boaz)

In the Pesach story, the risk is rewarded as the Jews are delivered to the place we now call Israel. To retell this story without my heart breaking, I remember that Israel is a name, the second name of Jacob as told in the Torah. After Jacob steals his brother’s birthright, betrays his father and leaves his home, an angel comes to him in the middle of the night to wrestle. This angel is a metaphor as Jacob wrestles with himself and unflinchingly examines his past hurt, and the pain he has caused. Only then, after this night of redemptive self-awareness, is he renamed.

Israel, then, is one who wrestles.
Israel is not one who learns silence, or
one who lives in fear, or
one who does as told.
Israel is one who asks, who listens, who struggles, and heals.
This is the legacy that I reclaim.

I walk with IfNotNow through the narrow places toward an American Judaism that wrestles with the reality of the occupation. And I walk with myself as I relearn my voice. I see the progression as our movement gains momentum across the country, and I know that no matter the pain of the change — the conversations with family, the bravery of words shared — this change is necessary. I know that I cannot remain where I am, and American Judaism cannot remain as it is. I know that we have a choice to make, and I ask: If not now, when?

Share
Copyright, Truthout. May not be reprinted without permission.
Sammy Sass

Sammy Sass is a writer and artist from Boston who has been talking, listening and creating for as long as she has had hands to write and words to ask. Her work is about raising our voices, because within our stories lives the power to create personal, communal and social freedom. Through speaking, then sharing, then listening, we can heal our planet from the hurt that comes from silence.