Driving south out of Silicon Valley, the big electronics plants gradually disappear, along with the sprawling developments that house their workers. In their place spreads San Benito County's fields of lettuce and tomatoes and orchards of apricots and walnuts.

Something else changes too.

As communities get more rural and farm workers make up more of the population, people get poorer.

In 2009, the average yearly income in Santa Clara County – home of Silicon Valley – was $94,715. Silicon Valley has its own not-so-hidden poverty, but the urban standard of living, especially in the country's premier high-tech industrial center, is much higher than San Benito County. Here, the average wage in 2009 was a third of Silicon Valley – $37,623. In April last year, when the recession boosted state unemployment to 12 percent, Santa Clara's rate was 10.3 percent. San Benito County's unemployment rate was exactly double – 20.6 percent.

San Benito County is not a special case. Across California and beyond, rural unemployment is higher and incomes lower, than in nearby urban areas. Imperial County's unemployment rate in March was 30 percent, probably the state's highest. The county's economy is almost entirely dependent on agriculture and farm labor. Orange Cove and San Joaquin, two farm worker towns in Fresno County, had per capita annual incomes of $8,000 and $,7500 respectively in 2009. Mexican immigrants make up a majority of their residents,. 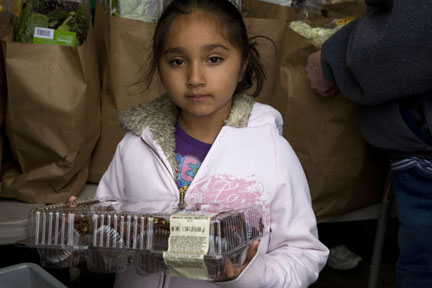 In a recession, income falls for most working families. But in rural areas, it falls faster and farther. When the San Benito County Community Food Bank opened 20 years ago as the Community Pantry, it served 35 families. Last year, it handed out 1,750 bags a week to over 5,000 people. Half of them are children, many from families who work in the fields.

Every year when the spring comes, lots of those families get in their big pickup trucks in the Rio Grande Valley in Texas, or the Salt River Valley in Arizona and head for Hollister, San Benito County's largest town. Generations of families have made the annual migration to get jobs in the San Benito Foods cannery, or in the local fields on the machines harvesting the tomatoes that get canned there. 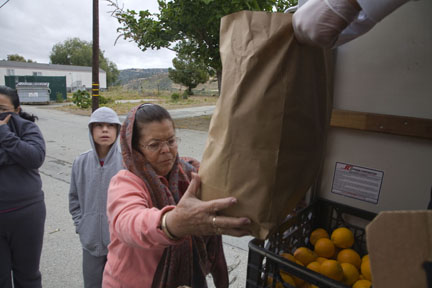 This year, say Harley and Emillio Delgado, work has been really slow.

“Last week we were picking apricots. It's the weather – it's been raining a lot and not really warm,” according to Harley. The two live in the migrant worker camp, set up just south of town in the 1940s to house the field labor needed by local ranchers. Today, part of the camp consists of trailers and another part buildings built after the war.

Every Saturday, Israel Banuelos pulls his truck out of a parking lot on the other side of Hollister, behind the warehouse that houses the county food bank. The truck is filled with bags of food and the camp is his first stop. The Delgado brothers are among the many that line up. 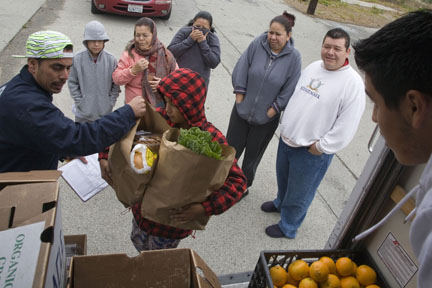 In one of the great contradictions of American poverty, people who spend their working lives producing the food consumed by millions in cities all over the country often don't have enough to eat themselves.

Here at the migrant camp, farm workers and cannery workers need the truck's food partly because work is slow. “But even when there's more work, there are still lots of families here waiting for bags of food,” Banuelos says, “sometimes more than there are today. People really need it. I don't know what they'd do if we didn't come every week. I feel I'm doing something important, helping them to survive.” 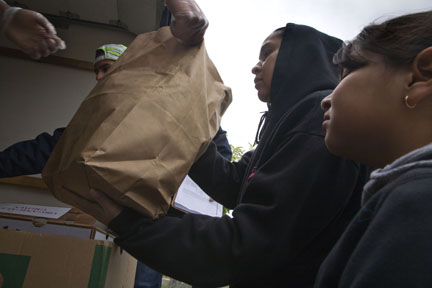 After the truck leaves the migrant camp, it heads back toward town, to the Rancho Apartments. These subsidized homes were built in the wake of the political changes brought by the farm worker movement of the 1960s and '70s.
During those years, at the height of the United farm workers, Hollister was a union stronghold. Jose Luna (known in English as Joe Moon), was a short, unassuming farm worker who became one of the union's best organizers. He came to Hollister in the late 1960s and organized the thousand grape pickers at what was then one of the largest wine companies in the world – Almaden Vineyards. When Luna left, his legacy wasn't just a contract, but a union the workers ran themselves. 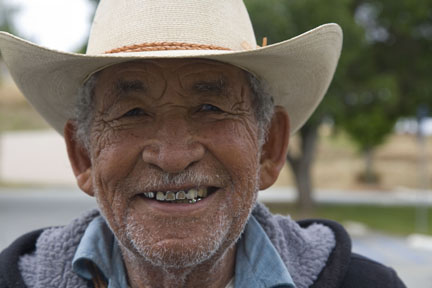 Every September, when the grape harvest started in the fields of Paicines, a half-hour south, hundreds of men and women would descend on the tiny union office on Hollister's Second Street. There, the ranch committee, usually headed by Roberto San Roman, would dispatch workers out to the fields. The office here was run by the workers. The union contract boosted piecerates, and a family working the nine-week season at Almaden could earn enough to get back to Texas or Arizona and make it through winter's dead time until the following spring.

Today ,the vineyards at Paicines are as extensive as ever, but Almaden Vineyards is hardly a memory. The company disappeared in the 1980s. In the place of the union dispatch hall, labor contractors hire workers for the harvest. Piecerates have dropped. Most farm workers today were small children when the union office closed. A few older men getting bags of food at the truck in the migrant camp, like Julio Cervantes or Jose Manzo, are old enough to remember. But most are not. And while the upsurge in Latino power that the union started is responsible for the housing in places like the Rancho Apartments, the young people who collect the bags of food out in front have no way to remember that. 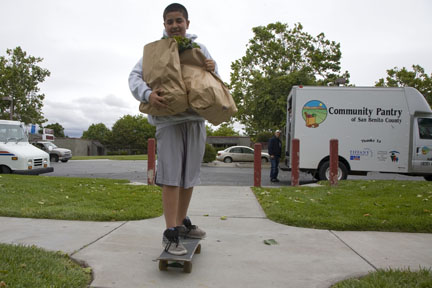 Mario Sosa gets bags of food for his family in the Rancho Apartments.

The food bank worries about those kids. “When youngsters have just noodles, bread or crackers to eat for dinner, as many here do, they cannot perform well in school,” its web site says. “This is how many families in poverty must live today, relying on carbohydrate-based food that's filling but very low in nutrition.” The bags of food on the truck have bread and even muffins, but they also have lettuce, oranges and food that won't cause as much child obesity.

After Banuelos' truck is empty, he drives it back to the warehouse.

In the afternoon, the truck goes out again, this time to find the homeless people living under the trees near the railroad tracks, on a hill overlooking downtown. The old men who get their bags there are not from farm worker families. Their conversation as they wait for food reveals a different slice of San Benito County's working-class history. 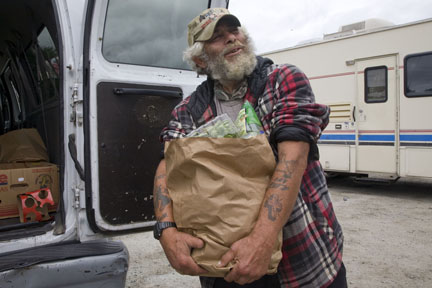 Peewee Rabello Sr. is one of the first in line. “My son Manuel,” he declares, “drives a big rig truck and his son, who's also named Manuel, just started driving one too. We've had ten generations of Manuels in our family. They've all been truck drivers. I have a picture of my great great grandfather – I forget how many greats there are – next to one of the first Model-T trucks, with a flatbed on the back.”

In addition to driving trucks, Rabello's family also worked in what was the county's main enterprise for many years – its mine. So did the family of Gene Castro, Rabello's friend who stands behind him in the food bag line. The New Idria Quicksilver Mining Company operated the country's second-largest mercury mine in New Idria for a hundred years, finally closing it in 1972. When it was going strong, it employed hundreds of miners. 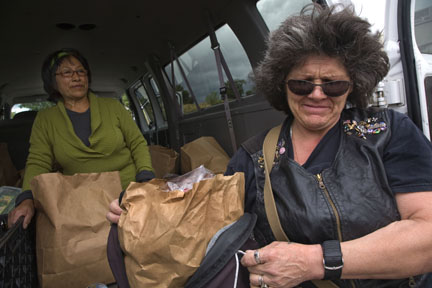 “My great great grandmother was blind,” Rabello remembers, “but she worked at the mine as a cook and washed the miners' clothes. I'm amazed she could do all that, but in those days, it was the only way she could support herself. When I was s a little boy she'd hold my hand and help me cross the road. I was never afraid. She could tell when there were cars coming, I guess by hearing them.”

Today, the mine is a ghost town in the hills south of Paicines, between the Salinas and San Joaquin Valleys. Half its abandoned buildings burned to the ground a few years ago. It is on the Environmental Protection Agency Superfund list because mercury-laden water from the closed shafts seeps into the San Carlos Creek and from there into the San Joaquin River and San Francisco Bay. In addition, rocks at New Idria contain lots of short-fiber asbestos.

The Rabello and Castro families, like those of other miners, must have suffered a great deal of illness over those hundred years. Mercury is a poison and causes Minimata disease and other forms of nerve damage. Workers who come into contact with asbestos contract mesothelioma, a painful and fatal form of lung cancer.

Now, descendents of those mining families, like Peewee and Gene, have no homes, no jobs and, often, not enough to eat. When the truck comes out every Saturday, they depend on the bags it carries to make it through the next seven days. 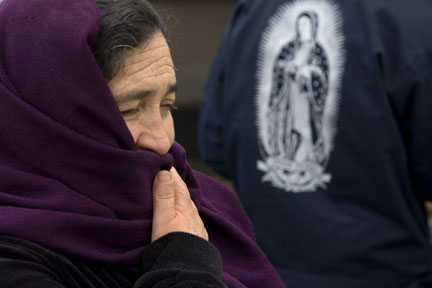 Rabello is not a passive food recipient, though. He opens his wallet and pulls out one carefully folded letter after another. In tiny, dense text, each demands that Congressmen and other local officials vote for a national health care program.

“We need some kind of socialized medicine,” Rabello says, “so poor people can get it.”

He knows these are the days of budget cuts, but that doesn't faze him. “I'm going to keep writing,” he says, “no matter what.”

Out of the same wallet he then pulls the card of the Truckstop Ministries. “I pray for it too,” he says.