When five protesters were shot by white supremacists in Minneapolis, Minnesota on November 22, my world turned a bit upside down. My time as an activist there, from 2006-13, has largely informed how I organize and do movement building. I knew at a lot of the people involved and was quickly on the phone. The protesters’ campaign demanded justice for Jamar Clark, an unarmed African American who was killed by Minneapolis police a week before.

I knew that the protest site, the Fourth Precinct Police Station on Plymouth Avenue, had previously been the location of a storefront center for black activism named The WAY. Thirty-five years ago, Police Chief Anthony Bouza bragged about how he would turn the site into a police station to show who was on top. Now the location spotlights the violent police role in institutionalized racism in Minnesota. It’s no wonder that freelance shooters would show up.

At the same time, it’s also no surprise that Black Lives Matter Minnesota quickly organized a mass march from the Fourth Precinct to City Hall the next day. But to fully appreciate this powerful response to the shootings, we need to realize how things might have gone differently. When many people hear about violent attack on their friends and fellow protesters, they react with numbness, shock and rage. Some are caught like deer in the headlights, unable to move because it seems beyond comprehension. Some simply want to fight back with violence, and others want to withdraw. Sometimes, though, we can see other options that strengthen our inner resiliency – the ability to acknowledge events, feel their effect and seek to heal by expressing the power we have in that moment.

That’s precisely what the Black Lives Matter organizers did when they quickly planned a march to emphasize the seat of accountability, City Hall. Protesters knew not to withdraw, run or lay low after the violence. Instead, they showed up. The route itself is three miles and difficult to navigate since the city has built an extensive highway system that stands between the predominately black neighborhood of North Minneapolis and downtown. A result of racist urban planning practices, the highway cuts off tourism and commercial business that might spread from downtown. (In neighboring St. Paul this same highway included such obviously racist routing that the city of St. Paul later made a formal apology.) 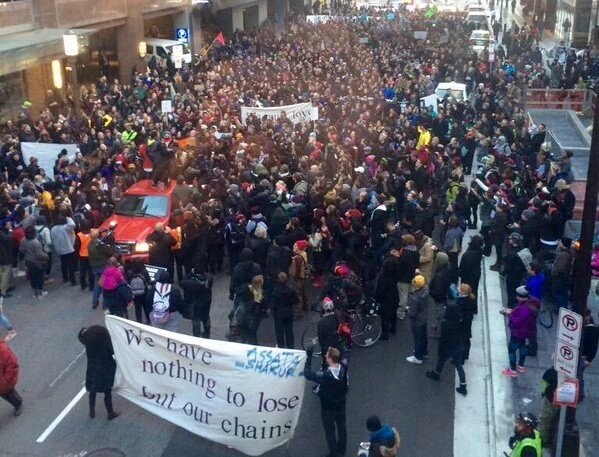 Marchers at the front, anxious to begin moving, were restless and organizers worked to channel the energy. What they did was brilliant: They changed the chants from the familiar “Black, Lives, Matter” and used different confrontational, specific words that channeled the escalating energy. Knowing that tense people need to move their bodies, organizers led those who were there to circle the precinct, urging the demonstrators to “let them see our faces, let them know who is here.” Organizing within a highly tense environment requires responsiveness to the moment. Rather than try to contain or minimize the intensity, the organizers found effective ways to channel it.

One of the wounded protesters, shot in the knee, came back to the precinct station, leaning heavily on a cane, determined to participate in the action. Cultural workers led a healing circle, local artists shared music and body workers set up a shack on wheels for private sessions if needed.

In the meantime, white activists went to Uptown – an upscale shopping district of mostly middle-class white people – where they challenged other whites to stand up against racist violence and speak out.

When the march was ready to head towards City Hall those in front had already practiced marching and could lead from their experience of having handled their own anxiety, sustaining their energy and then moving when the rest of the mass was ready to move with them. The route of the march made sense: It highlighted racial segregation in Minneapolis and illustrated the way that power should flow – from the struggle in the streets to the halls of justice.

Minneapolis has one of the most proactive and diverse city councils in the country. When Rep. Alondra Cano was running for office she personally called me to build a relationship. She and Rep. Keith Ellison are consistently engaged in the community by not only changing policies, but also supporting grassroots organizing. After the shootings Rep. Ellison tweeted, “As we continue our work on these critical issues, the safety of everyone at the Fourth Precinct must be our highest priority. Monday night’s shootings are not the fault of the victims or the Black Lives Matter movement, which is committed to nonviolence.” 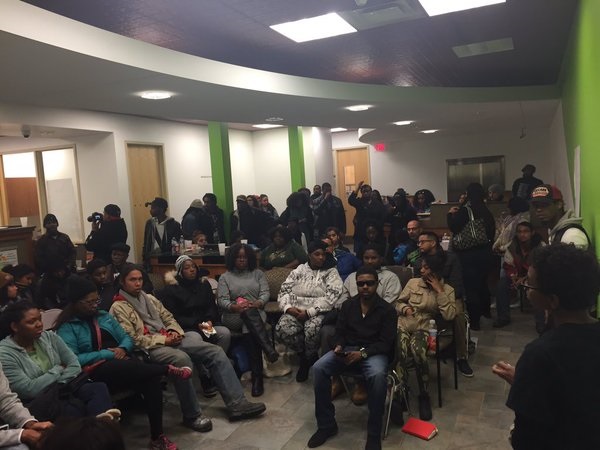 A community meeting to figure out the next steps after the shooting. (Photo: Black Lives Matter MPLS / Twitter)

As one of the largest cities in the Midwest, Minneapolis organizing is successful due in part because of how diverse cultural practices have combined with grassroots organizing. A vibrant East African community, trans youth organizers and the largest urban population of indigenous people in the country each contribute. The quick and effective response to the attack was additionally made possible because local organizers, who have been movement building for decades in the Midwest, have been offering trainings on trauma and resiliency for the last year. Showing Up for Racial Justice, or SURJ – a national network of groups and individuals organizing white people for racial justice – has supported white allies in Minnesota to talk to people in wealthy districts. The action in Uptown, for instance, was the result of a SURJ Minnesota chapter.

Meanwhile, in October, Training for Change held its three-day core training on direct education in Minneapolis – Training for Social Action Trainers – where Black Lives Matter demonstrators learned skills to confront challenges and facilitate difficult moments. Some organizers are also participants in the Training For Change Judith C. Jones Fellowship for Trainers of Color, as well as The Wildfire Project, which trains, supports and links grassroots groups, helping to lay the foundation for powerful movement building. In August, the Wildfire Project and Training for Change came together to train a number of those who have been active in this recent round of demonstrations.

Another important training, led by a group now known as Ayni, was finishing up the morning the news broke about Jamar Clark. Their approach, which they call the momentum model, “merges the traditions of mass protest and structure-based organizing to create a new tradition of mass protest in the United States.” During the last hours of that training, Black Lives Matters Minneapolis organizers were applying momentum concepts to their work that would take place later that day – the occupation of the Fourth Precinct.

The strategy of the civil rights movement turns out to be as relevant in 2015 as in 1960. When white supremacists attack you with violence, increase the pressure of your nonviolent action. The reward the racists were hoping for – to intimidate you into submission or to evoke counter-violence – is not the reward you’ll give them. Instead, you come back with stronger action, legitimate leaders applaud your nonviolence, and additional allies come forward. That’s the way to win local struggles, whether in Montgomery, Birmingham or Minneapolis.

Celia Kutz lived in Minneapolis from 2006-13 as a community organizer in South Minneapolis and was involved in numerous projects including the mass mobilization against the Republican National Convention in 2008, healing justice work as a Somatic Movement Educator and brining Training for Change more directly in to the Mid-West. She is Director Trainer at Training for Change and now lives in Philadelphia, PA.