The gender stall is dead. Last week a Council on Contemporary Families online symposium provided new data suggesting that the stall in progress on gender egalitarian attitudes and behaviors has ended. Evidence has accumulated, and a stall in attitudes that started around 1994 may have turned around after 2004. 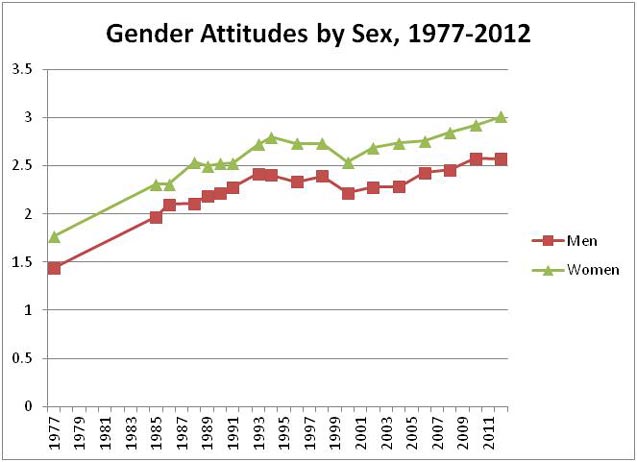 From Cotter, Hermsen, and Vanneman’s CCF brief using a composite of gender attitudes from the GSS.

Long live the gender stall. Here’s what gets me. The change in attitudes is not due to men and women becoming more similar in their attitudes. Under gender egalitarianism (ideally) you wouldn’t be able to predict someone’s views based on their gender. But… in the graphs here, there’s no hint of gender convergence. The figure on the left from Cotter et al., shows that people are at a higher level of approving of gender egalitarianism. But, men and women are the same distance apart. For young people, in Joanna Pepin’s figure (right) on youth attitudes, the same pattern appears. 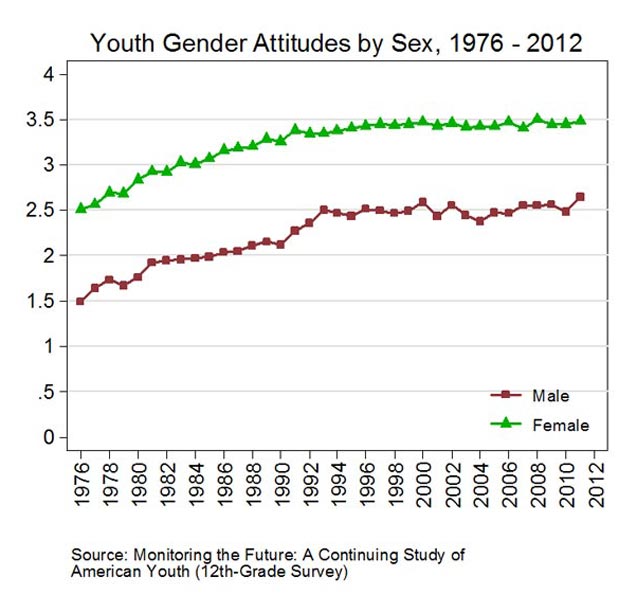 Pepper Schwartz and I have written about this abiding gender gap when we talk about the moving target of the sexual double standard.

Women and men have more sexual partners now than in the past; even so, they have consistently different levels of when they get negative reputation effects for their activity. Indeed, that gender performance issue comes out in Sassler’s brief in the CCF symposium. Yes, there’s no longer a gender-neutral-housework-means-less-frequent-sex for more recently joined couples. But… heterosexual couples in which men do most of the housework (less than 5 percent of the sample) have sex less often. (Who’s counting, anyway?)

Youth stalled too? Younger generations—millenials in particular—are at a much higher level of egalitarian attitudes than others. But… in the Cotter analysis, younger generations’ support for gender equality isn’t increasing—they just started at a higher level. The trend is flat. Like there’s a ceiling or something.

Joanna Pepin, at Representations of Romantic Relationships, wondered about the younger generation, and analyzed similar attitudinal questions in the Monitoring the Future survey of high school seniors from 1976 until 2012. (Her column is cross-posted here at Girlw/Pen, too!) She finds that high school seniors mostly have high levels of the egalitarian attitudes Cotter focused on.

Except for one area. When asked what they think of the statement, “it is better if a man works and a woman takes care of the home,” students disagree with this less and less. In other words, they are not as likely to reject traditional gender roles as young people in the past. They dropped by 10 percent in the past 20 years (from 70 percent disagreeing to 60 percent disagreeing). While they are at 90 percent agreement that women should be considered as seriously for jobs as executives or politicians, Pepin speculates that for millennial “women are viewed as peers in entering the work force, but continue to be responsible for labor at home.”

I’ll stick with my “But…” focus. There are some systematic catches to the whole rebound story: no gender convergence, persistent gender stereotypes on the domestic sphere, and I suspect these are linked. So, like Joanna Pepin, I’ll keep looking. And I won’t confuse change with progress until I see more convergence and fewer signs of sneaky essentialism. (For more background, see David Cotter and colleagues’ brief, “Back on track?” on changing attitudes and my overview of all four pieces in CCF symposium.)