Nate Silver, who became famous for his use of polling data to accurately project U.S. elections, launched a new blog – FiveThirtyEight.com last month. It’s been off to a rough start, “something between a disappointment and a disaster” as Paul Krugman wrote soon after its launch, because of some pieces that handled data rather badly. “[S]loppy and casual opining with a bit of data used, as the old saying goes, the way a drunkard uses a lamppost — for support, not illumination,” says Krugman.

I leave it to the reader to decide whether the FiveThirtyEight article on March 17 by Dorothy Kronick on Venezuela fits this description. While it has become acceptable to publish almost anything about Venezuela, so long as it makes the government look bad, here at CEPR we apply the same standards to all products.

The thesis of the article is strange. Correctly noting that the political polarization in Venezuela is overwhelmingly along class lines, with the upper income groups tending to support the protests and lower-income Venezuelans supporting the government, she asks rhetorically “why the divide?” and answers:

They disagree over a political vision for their country in part because they measure Chavismo against two different benchmarks: Chavistas compare the present to Venezuela’s pre-Chávez past, while the opposition contrasts the current economic situation with more recent developments in the rest of Latin America.

I think what she means to say is that Chavismo looks better as compared with Venezuela’s pre-Chávez era, than it does compared with the rest of Latin America. The first part is a no-brainer: per capita GDP actually fell by more than 15 percent in the 20 years prior to Chávez (1978-1998). However there is no evidence that the two sides are making any such different comparisons. Do voters anywhere in the world judge their government based on a comparison to its peers? If that were the case in the U.S., for example, President Obama’s approval ratings would be very high and the Democrats would be sailing to a landslide victory in November’s congressional elections because the relevant income-level comparison for the U.S. is Europe, which has done vastly worse in the recovery from the Great Recession since 2009.

Now let’s look at the comparison between Venezuela and the rest of Latin America. Is it fair or even logical to judge the performance of the Chávez (and Maduro) governments from 1999, the year that Chávez took office? For the first four years, the government did not control the national oil company, which accounted for about 50 percent of government revenue and 90 percent of export earnings. Rather, it was controlled by the opposition, who used it to sabotage the economy and launch several attempts to topple the government. As opposition journalist Teodoro Petkoff later wrote [PDF], the Venezuela opposition had a strategy of “military takeover,” from 1999-2003 (which succeeded briefly in the coup of April 2002). The opposition’s last attempt to use their control of the oil industry in December of 2002 resulted in a loss of GDP of 24 percent, comparable to the worst of the U.S. Great Depression. It also resulted in a large permanent loss of oil production in Venezuela’s traditional oil fields.

To ask an analogous question for the United States: If Paul Ryan controlled the Federal Reserve and raised interest rates to 25 percent in order to push the U.S. economy into a severe recession while President Obama was in office, would Obama be responsible for the economic performance of the U.S. economy during that recession?

Now if you are hardcore opposition, you can blame Chávez for all of this damage by saying that if he had just done everything that his political opponents wanted (instead of what the electorate had voted for), there wouldn’t have been this enormous sabotage of the economy. But I wouldn’t put Dorothy Kronick or Nate Silver in this category.

So, unless she can think of another reason to hold the government responsible for the economic damage caused by its opponents, we cannot start with 1999. The government finally got control over the oil industry in 2003. However, starting with 2003 would not be quite fair to the government’s critics, since that would measure growth from a low point. The fair way to do it is to start with 2004, when GDP caught up with the pre-recession level. That is a fair measure of the Chávez/Maduro years.

If we look at the growth of per capita GDP from 2004-2013, the picture changes significantly. Venezuela comes in 12th of the 20 countries, and more importantly for Kronick’s comparison it is tied with Bolivia at 2.7 percent annual per capita GDP growth. (Kronick uses Bolivia as a comparison to show that Venezuela has not done very well in the Chávez/Maduro years). 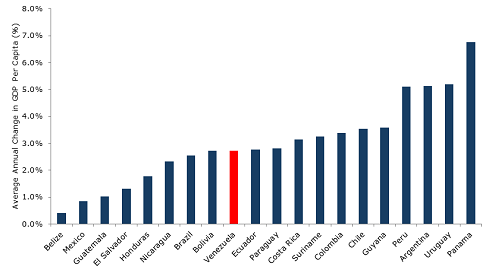 The author notes the reduction of poverty in Venezuela but for some reason does not compare it with that of other countries. However if we do that, we can see that Venezuela comes in fourth of 9 South American countries plus Mexico in the percentage reduction of poverty and also of extreme poverty; note that it is ahead of Bolivia, Kronick’s chosen comparison, and far ahead of the average for Latin America as a whole. This measure includes only cash income; if we were to place a dollar value on the increases in access to health care, education, and housing, Venezuela’s rank would go up significantly. 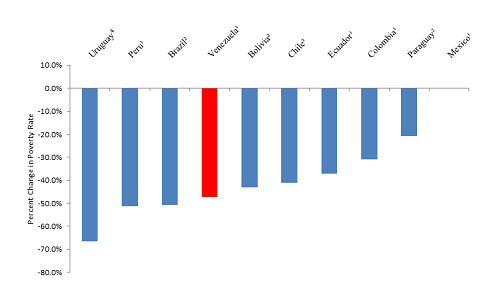 The rest of Kronick’s comparisons do not measure living standards. Inflation of course has become a serious problem over the past 16 months, and if it were to continue at this rate it could negatively affect output, employment, and possibly income distribution. However, we cannot assume that this will happen; for example, annual inflation was 39 percent in February 2003 but was brought back down. So, all we can do right now for a comparison like this is to compare measures of living standards and social welfare from 2004 to the present, with the latest available data. Many people are not aware of this fact, but inflation is not a measure of living standards.

Neither is the amount of liquid reserves held by the Venezuela’s central government, which is compared with Bolivia in this article. It is not clear why we are supposed to think this is an important comparison, or why Venezuelans should care about it. According to the latest report from Bank of America Merrill Lynch, the liquid and semi-liquid assets of the central bank, PDVSA, and other government holdings sum to more than $50 billion, which is quite a healthy amount of reserves relative to Venezuela’s imports (about a year’s worth). And especially since Venezuela’s currency is not directly convertible (there are exchange controls), it is not clear why cash reserves would be the most relevant measure for balance of payments purposes.

The author also compares Venezuela’s foreign public debt with that of Bolivia, showing that Venezuela’s is higher, at about 27 percent of GDP, with Bolivia at 16 percent of GDP. Of course this isn’t a measure of living standards either, but it could be relevant if you think Venezuela is facing some kind of debt crisis. It isn’t. And if we are going to make the comparison, it’s important to point out that Bolivia had foreign debt amounting to 10 percent of its GDP – owed to the Inter-American Development Bank – cancelled in 2007. That accounts for almost all the difference between the two countries’ foreign public debt. It was Chávez who clinched this deal by pushing other South American governments to agree to the cancellation (which also included debt cancellation for Honduras, Haiti, Guyana, and Nicaragua). 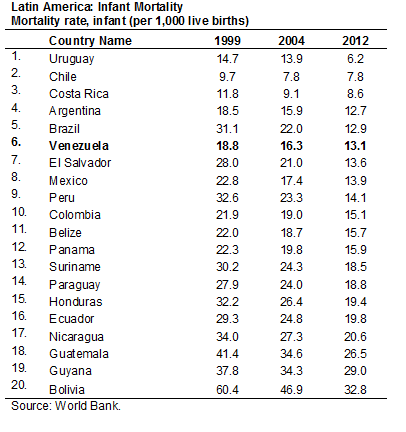 There are more irrelevant comparisons (e.g. Chávez won his 2012 election by “only” 11 percentage points, less than other incumbents), but it is not worth going through them all. The piece is a good illustration of the problem with this blog that Krugman pointed out, i.e. using (or misusing) numbers without a coherent framework.

The comparison with Bolivia, for example, could have been instructive in illustrating two important economic policy mistakes made by the Venezuelan government, if the author had a coherent framework. Although Bolivia did not need anywhere near 50 percent of GDP in liquid reserves to do it, the Morales government has kept the Bolivian exchange rate very stable for seven years. They used a managed float without a pre-announced target, and accumulated enough reserves (while also using some exchange controls) to maintain the exchange rate within a narrow range. Venezuela’s fixed exchange rate system, by contrast, has been much less stable and ran into serious trouble in the past year-and-a-half, with a sharp rise in the black market dollar premium and a consequent steep increase in inflation.

The second relevant comparison between Bolivia and Venezuela was their response to the 2008-09 world financial crisis and recession. Bolivia – partly because of plans already in the works – had a large fiscal stimulus, and ended up with about the best growth performance in the hemisphere in 2009. Venezuela responded with pro-cylical spending cuts and therefore had a recession that lasted a year-and-a-half (all of 2009 plus the first year of 2010). If the Venezuelan government had adopted counter-cyclical policies, its growth for the past decade would have come in higher than Bolivia’s and ahead of most of the region.

Of course, if the trends of the past 16 months were to continue, the Venezuelan economy could go down a different path where it would indeed underperform neighboring countries in its stated goals of raising the living standards of the majority of Venezuelans. But the author is trying to assert that this is what already happened during the Chávez/Maduro years – and for that, the data clearly go against her argument.

Finally, any evaluation of the Chávez/Maduro years should at least note the many billions of dollars of foreign aid that Venezuela has provided to the region – probably unprecedented for an economy of this size. From the point of view of an opposition politician, of course, there is no credit due here. But when looking at what happened to the oil revenues of this era that were not spent at home, it is not as if they ended up in some Swiss bank account as in the case of many U.S. allies. From an economic, human, and moral point of view, this is relevant.