Dispatches on Turkey is a special series for the American Philosophical Association Blog, featuring posts by an international group of academics and edited by Chad Kautzer, Associate Professor of Philosophy at Lehigh University. The interviews and analyses of recent political developments seek to express solidarity with those facing persecution and authoritarianism in Turkey as well as identify ways in which we can support them. Correspondence: [email protected].

In Plato’s Republic, Socrates criticizes the belief that we would prefer to act unjustly if we could do so without consequences, namely, without incurring punishment or damage to our reputation. In support of this position, Socrates’ interlocutor recounts the story of Gyges, a shepherd from Lydia or what is now Western Turkey. Gyges, we are told, discovered a ring with the power of invisibility, allowing him to circumvent all external mechanisms of accountability for his actions. In short, this ring granted him impunity, leaving only his will to influence his choices. In the end, Gyges swiftly and unequivocally chose to act unjustly, utilizing his newfound power to take over the kingdom through seduction and treachery.

It is not difficult to see Turkey’s President, Recep Tayyip Erdoğan, as a modern-day Gyges, although there is nothing magical about his story. Leveraging Turkey’s unique position as a platform for the projection of US military power, and as an informal border for the European Union, Erdoğan has effectively neutralized international mechanisms of accountability. As long as Turkey continues to prevent millions of refugees from entering the EU and opens up its military bases and airspace to US forces, Erdoğan and his Justice and Development Party (AKP) can abolish any remaining domestic checks on his power with impunity — systematically silencing and jailing academics, journalists, artists, and opposition party members as well as brutally suppressing public protests such as those in Gezi Park.

Erdoğan has declared marshal law and deployed the military in Kurdish regions, entered into open conflict with the Kurdistan Workers Party (PKK), targeted those who have investigated his corruption, and asserted control over the judiciary. He has relied on an expanded definition of terrorism and Article 301 of the Turkish Penal Code to outlaw almost any form of criticism or opposition, pursued lawsuits against thousands at home and abroad for “insulting” the President, and has plans to constitutionally transform the presidency from a largely ceremonial position defined by the constitution into one more in line with the authoritarianism he already practices.Erdoğan’s ability to persecute academics, take over news organizations, and force out the Prime Minister Ahmet Davutoğlu — who had ultimate executive authority according to the Turkish constitution — is clear evidence of the systematic destruction of democratic institutions and violations of human rights. Socrates’ response to the story of Gyges in the Republic was to sketch the image of a just state in order to identify the qualities of a just person. Today, we are witnessing Erdoğan invert this narrative as he dismantles the institutions of the Turkish Republic in order to build a theocratic kingdom in his own image. 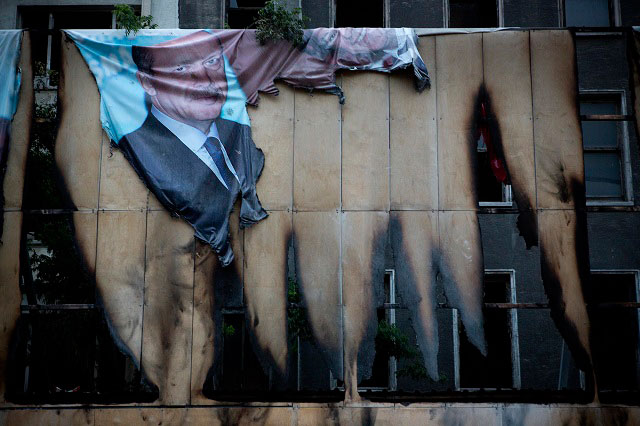 A Tayyip poster reflecting the clashes of the previous night in Tarlabaşı, an area just south of Taksim Square. Erdoğan afişi: Kerem Uzel/NarPhot

The persecutions began in earnest in January, when over 1,000 academics in Turkey — calling themselves Academics for Peace — issued the statement “We will not be a party to this crime.”The declaration demanded an end to state violence in the Kurdish regions and the return to a peace process. A few days later, Erdoğan accused the signatories of supporting terrorism, declaring in a speech: “We must rid public institutions, such as universities, hospitals and schools, of people supporting the terrorist organization. Nobody can fight this state while eating bread provided by this state.”

Investigations, house raids, detentions, firings, and deportations soon followed, often under the auspices of Article 7 of the Anti-Terror Law. Several university administrations have also been investigating their own faculty with support from Turkey’s Higher Education Council (YÖK). Academics are regularly harassed and even receive death threats. To encourage vigilantism, a newspaper in Turkey published the pictures of all of the signatories to the declaration. Four academics — Esra Mungan, Meral Camcı, Kivanç Ersoy, and Muzaffer Kaya — were recently released after spending over a month in a high-security prison on terrorism charges for signing. They may now be charged with lessor crimes — namely, for offending the Turkish Nation (Article 301 of the Penal Code) — and are awaiting their trial in September. The status of the remaining signatories is precarious, which is certainly one of Erdoğan’s goals, and why international forms of solidarity and support are crucial at this moment. 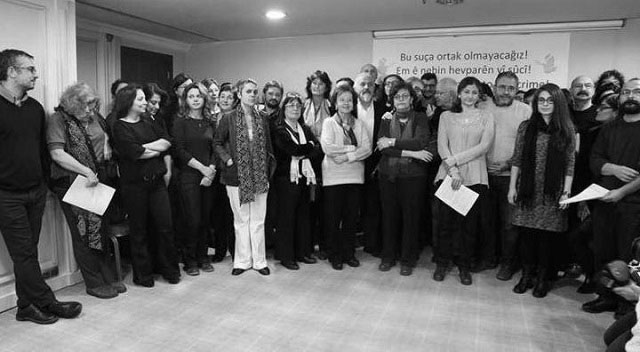 What does international solidarity look like? No one action or form of support is sufficient, of course, but when taken together they constitute a growing accountability otherwise missing on the international stage. As entertainers and comedians around the world have demonstrated, Erdoğan and the AKP are as unsettled by public criticism and satire as they are obsessed with silencing it. Such protests and provocations help to undermine the legitimacy of Erdoğan’s regime, revealing its authoritarianism and making it harder for the EU and US to avert their gaze from the Gyges they helped create.

Those of us able to speak and act freely can do so loudly, collectively, and creatively.

Professional organizations, unions, departments, and individual academics have published open letters and petitions as well as organized press conferences and symposia. Media outlets, such as die taz in Berlin, have published articles by journalists from the newspapers BirGün and Agos in Turkey, circumventing government censors. Academic institutions have joined Scholars at Risk, an organization that advocates on behalf of academics and intellectuals under threat of persecution, arranging positions for them within member institutions. Award committees, such as that of the Aachen Peace Award, have honored the courage of the signatories to “We will not be a party to this crime.” German academics have called upon their Foreign Minister and the Minister of Education to review and possibly suspend relations with Turkish institutions currently investigating their faculty for signing the declaration. Organizations such as Amnesty International have organized protests during Erdoğan’s visits outside Turkey, while academic groups such as the Transnational Work Group on Academic Liberty and Freedom of Research in Turkey (GIT), the Research Institute on Turkey (RIT)and the Committee on Academic Freedom (CAF) of the Middle East Studies Association (MESA) are closely monitoring developments in Turkey. And these are just a few recent examples of support and solidarity.

In the Republic, Socrates’ interlocutor argued that we would all behave like Gyges if we could act with impunity, that “those who practice justice do it unwillingly and because they lack the power to do injustice,” for we “desire to outdo others and get more and more.” For evidence to the contrary, we only need to look to the academics in Turkey who desired to stand with those facing persecution and state violence, who chose to act justly when remaining silent in the face of injustice would have been more profitable. Their courage gives lie to the notion that all of us would choose as Gyges did and it is with them that we now stand.

A Turkish translation of this text, “Türkiye’de Akademisyenler ve Otoriteryanizm,” appeared in BirGün on June 1, 2016.

Chad Kautzer is Associate Professor of Philosophy at Lehigh University. He is the author of Radical Philosophy: An Introduction (Routledge, 2015) and co-editor, with Eduardo Mendieta, of Pragmatism, Nation, and Race: Community in the Age of Empire (Indiana University Press, 2009).