© 2023 Truthout
Debunking the Myth of the Big Spender

While I have written about this topic recently, there is a bit more to the story on how government spending has not, contrary to what you may have heard, surged in the United States under President Barack Obama.

Cue the usual suspects, shouting that I am lying.

Here is a calculation that should make things a bit clearer. If there had not been an economic crisis and a change in which party had control of government over the last three years, what changes would we have expected to see in total government spending — federal, state and local? Probably that spending would follow a growth trend in the economy — that is, real gross domestic product, which accounts for inflation, would grow with the economy’s potential, and government spending would grow at the pace of real G.D.P.

Accounting for inflation — the G.D.P. price deflator metric rose 4.1 percent from the second quarter in 2007 to the second quarter of 2010 — “normal” growth in government spending would have been 11.7 percent over the past three years. Actual growth has been higher: about 19.5 percent.

So government spending is about 7 percent higher, or about $350 billion more, than a simple trend projection would have suggested. So what accounts for the higher spending? None of it is government consumption; it’s all in transfer payments. Data from the Bureau of Economic Analysis is not quite as helpful as I’d like, but it is clear that a large chunk, roughly $100 billion, is unemployment benefits, which have surged along with unemployment, and another large chunk is Medicaid spending, which has surged because the slump has impoverished more people. Add more for other safety-net programs, such as food stamps. Also, Social Security and Medicare outlays have gone up about $85 billion more than my 11.7 percent projection — perhaps due to increases in health-care costs and the fact that baby boomers are aging and maybe even because some people retired early because they could not find jobs.

And that basically explains the growth in government spending. No giant expansion of the welfare state — just business as usual in the face of a horrific slump.

For all those who do not believe me, the simple graphic on this page showing government spending compared with revenue presents further evidence that government spending has merely continued to rise more or less on its precrisis trend. Revenue has plunged because the economy is deeply depressed. 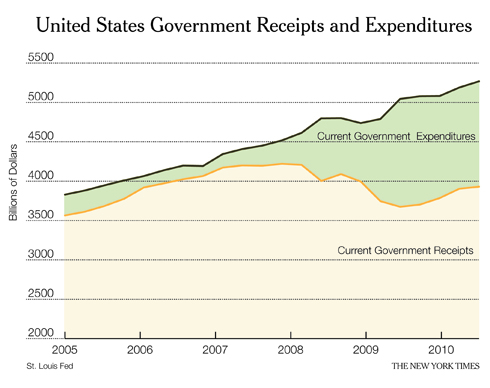 The giant increases in government spending we keep hearing about are a myth. If there had been more truth to it, the economy wouldn’t be as depressed as it is.

The United States’s federal debt has reached $13.7 trillion, and as the Nov. 2 midterm elections draw closer, Republicans have intensified their calls to cut spending as a remedy to this fiscal situation.

So far, this stance has proved politically successful — polls across the nation predict a Republican landslide.

However, Republican legislators have proposed only a few unspecific actions that might curtail spending. Several have demanded a repeal of new health-care legislation, while others, such as Representative Paul D. Ryan of Wisconsin, want to put in place cuts to programs like Social Security and Medicare. A careful comparison shows that Republican policies of the past 10 years will prove to be more costly than policies approved by the Democratic Congress over the last four.

The Congressional Budget Office, an independent government agency, calculates that the 2003 Republican-approved expansion of a government-funded prescription drug program will cost the United States $1.1 trillion over the next 10 years — more than the recently approved new health care initiative and President Barack Obama’s stimulus package combined.

While the results of the election will help determine the future path for economic policy, new ideas will likely be on the table. In districts where incumbents are running for re-election, 6 in 10 voters say it is time to give someone new a chance, according to a New York Times/CBS News poll released Oct. 27.