Protesters in Madison, Wisconsin during a rally against Gov. Scott Walker’s budget bill on February 26, 2011. Walker’s recent support of regressive “Right-to-Work” legislation has laid the groundwork for other states to follow in his footsteps. (Photo: AAraujo / Shutterstock.com)

This week, Wisconsin Gov. Scott Walker signed an anti-union right-to-work (RTW) bill into law. RTW laws require unions to provide the same representation and workplace services to all workers in a workplace but make contributing to the cost of that representation optional. They lead to smaller, weaker unions and lower worker wages and benefits.

The Center for Media and Democracy detailed the fact that the Wisconsin bill was taken almost word for word from the American Legislative Exchange Council “model” bill. (See CMD’s side-by-side here.) And we reported on the Koch and Bradley Foundation funding behind the panoply of usual suspects that flew into the state to testify on behalf of the bill, including “experts” from the National Right to Work Committee, the Mackinac Center and the Heritage Foundation with assists from ALEC “scholar” Richard Vedder and State Policy Network “stink tanks” like the Wisconsin Public Research Institute. And let’s not forget the $1 million in TV ads from the Koch-funded Americans for Prosperity group.

But the push for RTW continues in multiple states in a variety of forms. From a legally dubious executive order in Illinois to an equally suspect county-level strategy in Kentucky, ALEC’s effort to disable unions as an organized voice for working families marches on.

New Hampshire: Working families won a round last week when two Republicans in the State Senate voted with all 10 Democrats against a RTW bill, resulting in a 12-12 tie which defeats the bill. Even so, two other RTW bills continue to move through the State House. H.B. 658 is taken straight from the ALEC playbook. (See side-by-side here and below.) Democratic Governor Maggie Hassan is a RTW opponent. 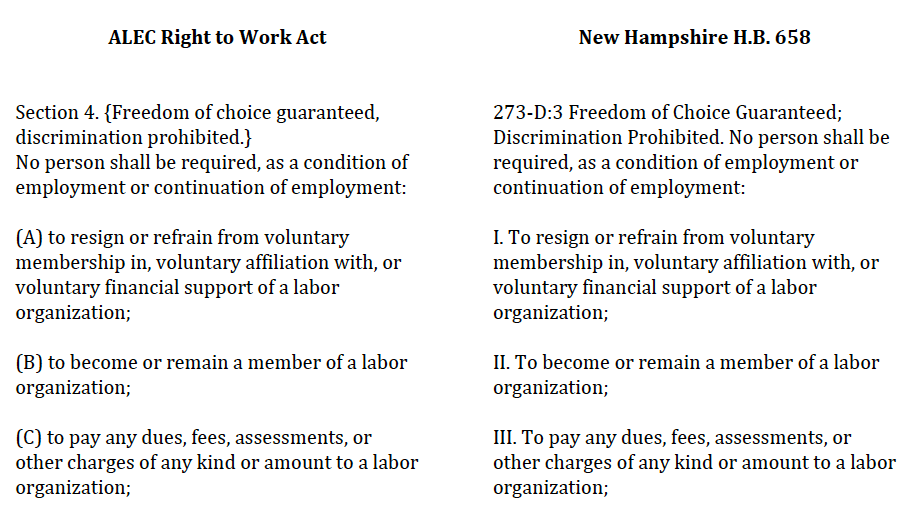 Missouri: Missouri has two identical RTW bills (H.B. 116 and H.B. 569) that borrow language from ALEC, sponsored by two ALEC legislators (Rep. Eric Burlison and Rep. Bill Lant respectively.) H.B. 116 bill passed the Missouri House on February 12, the first time a RTW bill has ever been approved in a chamber of the state’s legislature. Despite an overwhelming Republican House majority, 23 Republicans voted against the bill. The legislation now moves on to the State Senate, where Republicans hold a 25-9 majority.

Last night there was an “informational” hearing in the Senate on S.B 127 by ALEC legislator Senator Dan Brown, with key portions taken verbatim from ALEC. (See the side-by-side here.) If the bill also passes the Senate, Governor Jay Nixon has vowed to veto it. On the evidence thus far, and despite a promise from Grover Norquist, Republicans do not have the votes to overturn a veto.

New Mexico: The Republican-controlled New Mexico State House passed a combined public- and private sector RTW bill (H.B. 75) on February 25. ALEC has versions of both these bills and bill author Rep. Dennis Roch is an ALEC member. In an apparent effort to make the legislation more palatable, the measure also includes a 50-cent increase in the state’s minimum wage, to $8.00 per hour. The bill now moves on to the Democratic-controlled Senate, where a hearing was held Sunday and a vote is expected this week. Senate Democrats claim to have the votes to stop it. Republican Governor Susana Martinez is a supporter.

Late last night, the Senate’s Public Affairs Committee voted to table the legislation for the session.

West Virginia: Republicans took control of both houses of the state’s legislature in 2014 and ALEC member Rep. John Overington promptly introduced an ALEC RTW bill H.B.2643 (see side-by-side here). However, Majority Leader Mitch Carmichael said recently that, with the session due to end March 14 and the bill still in committee, RTW was dead for the 2015 session. Just to make sure, 6,000 union supporters rallied at the State Capitol on Saturday.

Kentucky: Democrats in both the State House and governor’s office have stymied the corporate push for RTW at the state level in Kentucky. An ALEC RTW bill (S.B. 1) authored by ALEC member and Senate President Robert Stivers, passed in the Republican-controlled Senate but did not make it out of committee in the House. (See side-by-side here.)

The bigger action in Kentucky is at the local level. Since mid-December, ten counties in Kentucky have passed local RTW ordinances, and others are exploring the possibility. Challenging a half-century of settled labor law, the Heritage Foundation and the new ALEC offshoot, the American City and County Exchange (ACCE), are promoting the idea that localities also have authority under National Labor Relations Act to enact RTW. Kentucky’s Attorney General does not share that interpretation and a coalition of Kentucky unions has filed in federal court to overturn the ordinances. This ALEC/ACCE strategy was featured on the front page of the New York Times.

Illinois: Billionaire Republican Gov. Bruce Rauner has issued an executive order implementing RTW for Illinois public sector workers and preemptively filed suit in federal court trying to get the current law declared unconstitutional. He has also pushed for enabling legislation to allow Illinois localities to pass Kentucky-style local RTW ordinances. An ALEC RTW bill (H.B. 4139) has been introduced in Illinois, but may not pass in the Democratic-controlled legislature. (See the side-by-side here.)

Michigan: Republican State Rep. Gary Glenn, a founding member of the Michigan Freedom to Work Coalition, has decided Michigan’s 2012 RTW law did not go far enough. Glenn has introduced a bill (H.B. 4312) to extend RTW to the police, fire and public safety unions exempted from the 2012 law, and another (H.B. 4311) that would do away with exclusive representation in the public sector by banning public sector unions from representing non-members.

Jody Knauss is a senior analyst and writer at Center for Media and Democracy. He has two decades of business, labor and economic policy experience.