Update: The House has approved the resolution to repeal the FCC’s privacy rules for internet service providers by a vote of 231-189. As expected, the vote fell along party lines, with Democrats fiercely opposing the resolution in a preceding floor debate, and Republicans lining up to support it. The resolution overturns recent FCC rules that required internet service providers to ask customers for their permission before gathering sensitive personal data and selling it to advertisers.

Here’s the original story published before the vote:

Have you ever noticed that some online advertisements seem to know your age and shopping habits? What about your sexual orientation, or even your medical history?

Advertisers buy such information from web companies that track your activity online, and internet service providers like AT&T and Cox don’t want to miss out on the profits. That’s why the broadband industry has asked Congress to dismantle rules requiring internet providers to explicitly ask for your consent before harvesting sensitive personal information and selling it to advertisers, according to privacy advocates.

The House of Representatives is expected to vote today on a resolution that would repeal these privacy rules, which were recently established by the Federal Communications Commission (FCC) under the Obama administration to prevent internet providers from tracking their customers online without their permission.

Republicans regained a majority at the FCC under the Trump administration, and the commission recently placed a stay on the privacy rules while it reconsiders them at the behest of the industry. If the resolution before Congress becomes law, the rules would be blocked permanently.

The Senate voted 50-48 to approve the legislation last week, with 50 Republicans voting for the resolution and two abstaining. No Democrats supported the resolution, and Senate Minority Leader Chuck Schumer (D-New York) called on the House reject it.

“The little privacy we have left, the kind that enshrines our personal emails, our health information, our finances and even the websites our kids visit, must not be made available to everyone and anyone,” Schumer said in a statement.

Consumer and internet freedom groups are also warning lawmakers in the House to oppose the resolution against the privacy rules or face backlash from digital rights activists and angry consumers.

“Congress should know by now that when you come for the internet, the internet comes for you,” said Evan Greer, campaign director of Fight for the Future.

Lawmakers shouldn’t take Greer’s words lightly. Fight for the Future has mobilized massive online campaigns in the past, most notably in support of strong rules to protect net neutrality. The group unveiled a billboard advertisement this week calling out the Republican senators who voted to repeal the privacy rules by name. The billboards will be going up in Washington DC and other cities: 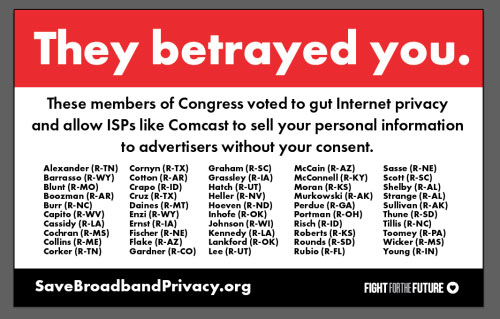 “These billboards are just the beginning,” Greer said. “People from across the political spectrum are outraged, and every lawmaker who votes to take away our privacy will regret it come election day.”

If the rules are successfully repealed, internet service providers will be free to harvest browsing histories, Social Security numbers, data on app usage and even personal information from emails, without explicitly asking customers if they would like to “opt out” of sharing such data first, according to Dallas Harris, a policy fellow at Public Knowledge, a digital rights and consumer group.

“Internet service providers seem to operate in the background; we don’t think about them very much until we pay the bill every month,” Harris said. “The amount of data about you that they are allowed to collect and market is astounding.”

The FCC privacy rules would require providers to explicitly give consumers the option of sharing their data before gathering it for marketing and other reasons. Harris said that, under federal law, a consumer could already opt out of sharing this data with internet providers, but doing so is often complicated and time consuming. She spent over an hour talking with representatives of her provider before learning how to opt out.

Besides preventing providers from selling data to marketers without explicit consent, the rules keep providers from “snooping” through your web traffic and injecting ads based on what you’re browsing, according to the Electronic Frontier Foundation. Providers could also preinstall software that tracks browsing on your mobile phone and “hijack” your searches on search engines, sending you directly to websites that pay providers to detour traffic in their direction instead of showing you the normal list of search engine results.

In other words, the repeal would block Obama-era privacy protections designed to prevent your personal online data from becoming an all-out corporate commodity.

The FCC introduced the privacy protections last year after its landmark net neutrality decision allowed the agency to regulate the internet more like a public utility everyone needs, rather than a luxury service. Internet service providers have been trying to squirm out from under the ruling ever since.

In a letter to top members of Congress in January supporting a repeal of the privacy rules, a number of telecom and advertising industry groups said the FCC rule would “stifle innovation” and prevent consumers from receiving “customized services” and information about “new products and offers.”

Republican Sen. Jeff Flake of Arizona, who sponsored the resolution to repeal the privacy rules in the Senate, argued in a recent op-ed that a repeal would protect “consumer choice” by allowing providers to “inform customers about innovative and cost-saving product offerings.”

Like the industry, Flake criticized the FCC for taking over privacy regulations for internet providers from the Federal Trade Commission (FTC) after designating the internet a “common carrier” to establish the net neutrality protections. The FTC sets privacy standards for websites like Facebook, which routinely sells user data to advertisers.

The industry complains that meeting privacy standards set by the FCC gives web platforms that gather user data under FTC rules a competitive advantage, especially when it comes to selling data to marketers.

However, advocates argue that web platforms like Facebook are very different than companies like Cox or AT&T. Consumers have a choice whether to use Facebook, but in many markets, consumers can only choose between a few internet service providers.

Some Republicans have suggested that better privacy protections are forthcoming, but Flake’s bill would repeal the rules under the Congressional Review Act (CRA), a tool that Republicans are using to dismantle a long list of Obama-era regulations. Under the CRA, the FCC would be barred from establishing similar privacy rules in the future.

Tim Karr, a spokesman for the digital rights group Free Press, said there are no rules on the books at the FTC to replace them.

“One of the reasons [Republicans] have rushed this to a vote, I believe, is partly because they want to pass it before activists and the public at large catch on,” Karr said, adding that lawmakers also have limited time to act under the CRA. “They are not protecting consumers.… They are actually taking away essential privacy rights.”

A recent report at Vocativ shows that the industry gave $1.7 million in campaign donations to the 22 senators who supported the bill.

“The conservative party I know was always a fan of privacy in the past, so it’s really not clear what they are trying to do here besides assuage the industry lobbyists — no other way to explain it,” Harris said.

Harris and Karr agreed that the Republican-controlled Congress has shown that it can be influenced by public opinion, most recently when a number of Republicans dropped their support for the proposal to repeal the Affordable Care Act. Republicans are trying to repeal the privacy rules before consumers have a chance to notice — but if enough voters catch on, perhaps they will drop their support for this bill, too.