Although the US corporate media helped to produce Donald Trump, his unpredicted rise to power delivered a shocking wake-up call to media professionals and catalyzed unprecedented global debates about “post-truth politics.” Yet news media continue producing the spectacular and lucrative reality television show, “Trump Making America Great Again.” While the crisis of polarized US is blamed on far-right news, filter bubbles and social media, traditional mainstream news media are not being held responsible. Business as usual is supremely risky in times of crisis: routinized reporting habits, amplification and repetition of lies dangerously normalize Trump and his administration. As the countdown of democracy’s slide into tyranny progresses, like it or not, the future of democracy rests in the hands of the journalism industry.

From the moment the billionaire descended his Trump Towers escalator making his bid for candidacy, corporate media ushered Trump into presidential power through their 24/7 flood of free campaign advertising. By the time of the US presidential primaries, the Trump spectacle dominated all forms of 2016 election coverage, with Clinton definitively sidelined. As numerous reputable studies now evidence, not only was Trump consistently given more extensive coverage than Hillary Clinton, overall he received significantly more positive press than did she. How many headlines or features dominated the news about the prospect of the historic first of a female president of the United States? 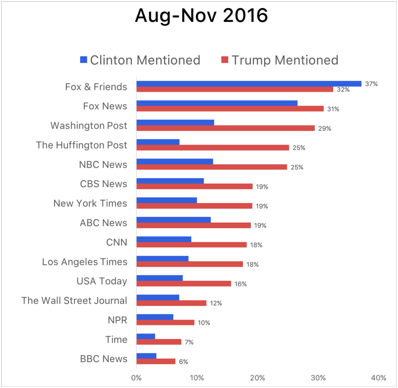 Every mainstream outlet hitched their star to the master of reality TV and his attention-grabbing spectacles. To be sure, who can blame a shrinking industry from grasping hold of a lucrative lifeline? Made by and for TV, Trump’s off-script, aberrant behavior has provided news media with a steady flood of shock and scandal, breathing new life into a dying industry, exponentially increasing news viewers, subscribers and advertisers. For the first time in years, corporate-owned print media is turning a substantial profit.

The shocking turn of events on November 8 catalyzed serious reflection by journalists about the role their coverage played in the election outcome. Named 2016 Word of the Year by Oxford Dictionaries, “post-truth” — defined as circumstances in which appeals to emotion and personal belief are more influential in shaping public opinion than objective facts — has provided a convenient umbrella for ongoing panicked debates: How had mainstream media gotten things so wrong? Outmoded polling methods? Too much coverage of the election as a “horse race”? Some confessed to ignoring warnings about media “filter bubbles,” thus also overlooking the extraordinary degree of partisan polarization of US voters. The lack of racial and economic diversity of journalists themselves resulted in omitting coverage of entire social groups and key demographics. East Coast media elites had to face facts: not only had they been out of touch with the vast rural populations supporting Trump, but they also had no clue about the silent majority who opted not to vote at all.

But what does all the spilled ink on “post-truth” add up to? Where’s the accountability of traditional agenda-setting news to our precarious democracy? In question here are not FOX and Breitbart news affiliates, nor social media platforms of Facebook and Twitter, all of which do of course continue to amplify Trump’s lies and ‘alternative facts’ directly to his supporters. The media of concern in this instance are those venerable sources such as the “newspaper of record” The New York Times, and other “agenda setting” media, including print and broadcast news sources such as The Washington Post, CNN, and ABC. How can the Fourth Estate learn from history, assess their role aiding and abetting lying politicians and further eroding American’s trust in democratic governance, and change course before it is too late?

The perennial problem with corporate news is its inherent lack of historical context: news is always now, always reduced and decontextualized. The advent of 24/7 news, and increased competition resulting from the vast proliferation of news sources, compounds the problem. Case in point: the 2016 Word of the Year, post-truth (like the surprise results of Brexit and the US presidential election) appears to have emerged from thin air. But only because mainstream media has no memory.

The History of Post-Truth

Indeed, post-truth does have a history, as pointed out by late night host and comic court-jester Stephen Colbert shortly after the November election: “Post-truth is a rip-off of truthiness!” Sure enough, 10 years ago, Colbert’s newly coined term “truthiness” was selected as Word of the Year by the American Dialect Society in October 2005 and by the Merriam-Webster Dictionary in 2006. Defined as “belief in what you feel to be true rather than what the facts will support,” Colbert introduced truthiness on his first ever episode of “The Colbert Report” in 2005, aiming this biting satirical bullet at the lies propagated by both the Bush administration and the corporate news media.

Colbert targeted not only the Bush administration’s unprecedented lies, but the corporate media’s uncritical parroting of false information regarding weapons of mass destruction in Iraq as the pretext for an illegal, preemptive invasion. As New York Times columnist Frank Rich summarized a year later, “For all the recrimination, self-flagellation and reforms that followed these journalistic failures, it’s far from clear that the entire profession yet understands why it has lost the public’s faith…. That state of denial was center stage at the correspondents’ dinner last year, when the invited entertainer, Colbert, ‘fell flat,” as The Washington Post summed up the local consensus.”

As journalist Tracy Cowen noted on November 18, 2016, “Acting like ‘truthiness’ never even happened so that ‘post-truth’ could have its moment, however, is arguably just additional proof that we really have entered a new era of nonsense. Truthiness indeed.”

The notion of “post-truth” feeds the potent myth of news as unbiased, objective, credible and balanced, and implies that — until now — news organizations provided unvarnished truth. Yet with few exceptions, media scholars recognize that corporate ownership privileges pressures from advertisers, owners and elite interests over media’s responsibilities to the public good. In fact, “post-truth” has provided The New York Times with an opportunity to rebrand itself as purveyors of “The Truth,” while The Washington Post adopted a new banner, “Democracy Dies in Darkness.”

What Will It Take to Regain the Public’s Trust?

Many news organizations across the political spectrum (including CNN, The New York Times, Wall Street Journal, ProPublica, BuzzFeed) are directing new profits and resources to increase their coverage of Trump.

But what kinds of news reporting will be supported by the influx of new resources? Without careful strategizing, news media that report Trump’s views or statements are feeding a surreal, vicious circle of nonsense beyond doublethink. Trump’s facts and policies and decisions are based not on policy advisers or intelligence briefings, but on truthiness he consumes from FOX and other questionable televised cable news and regurgitates for traditional news to report.

At present, agenda-setting outlets are aiding and abetting Trump’s game plan of distraction, confusion, spectacle and mistrust. But Americans’ trust in media, government and democracy has been in steady decline since the egregious lies of the Bush administration, and even prior to the 2016 election, trust in US government across partisan lines has hit an all-time historic low. Over 65 percent of Americans feel the news media are having negative effect; 74 percent believe elected officials place their own interests ahead of the American people’s or the nation’s interests.

As tempting as it is to lay blame on Breitbart, algorithms, filter bubbles and reader confirmation bias, if venerable news sources consider themselves agenda-setters and purveyors of “The Truth,” they owe us answers: Where is investigative journalism, timely muckraking dedicated to uncovering answers about alleged Russian interference in the US election; about the FBI’s unprecedented and unwarranted smearing allegations against Clinton days prior to the election; about the daily constitutional, legal and policy violations by Trump and appointees; about the reckless behavior of the Republican party; and US foreign policy and acts of war determined by Trump’s mood swings?

If this country is to survive Trump’s blatant disregard for the US Constitution and the values and norms of a liberal democracy, mainstream media urgently need to take responsibility for their role in producing, legitimizing and normalizing Trump thus far. Yet instead, Trump’s capacity to read from a teleprompter is rewarded by media fawning over his “presidential tone.” Surely, our best hope for integrity and truth is not by tracking Trump’s emotional moods or Sean Spicer’s brave new world, honing our capacity to interpret the difference between when Trump may be telling “the truth as [resident” vs. his “beliefs” vs. when his use of “air quotes” should tip us off that he was “just joking.”

Just days after the 2016 US presidential elections, Jon Stewart emerged from retirement to urge media to end their love affair with Trump. To be sure, ending a love affair that saved one from financial ruin requires serious tough love and a much cleaner diet after the feeding frenzy that Trump himself lives for. Admit your powerlessness, media. We’ll grant that you are not sinners, but sorry victims of capitalism’s profiteering.

Surely, democracy is worth the cut in your coffers. Not to mention at this rate, not only will the public have lost all trust, but the tyranny you have helped usher in will force you into retreat and poison your future regardless.

Take a page from the venerable history of journalists who dare to question the king. No matter how tempting to return to your established reporting routines, especially having been tossed unceremoniously to the curb by Trump and dismissed as the “opposition party” — assume your pride of place as the fourth estate, and renew your role as guardians of the US Constitution.

Jon Stewart called it in 2004, during his notorious “Crossfire” appearance, when he begged journalists to engage genuine democratic debate rather than “Jerry Springer” theater and partisan hackery:

See, the thing is, we need your help. Right now, you’re helping the politicians and the corporations. And we’re left out there to mow our lawns … Stop! Stop hurting America.

Share
Copyright, Truthout. May not be reprinted without permission.
Megan Boler

Megan M. Boler is a professor in the department of theory and policy studies, at the Ontario Institute of Studies in Education/University of Toronto, and associate faculty of the Knowledge Media Design Institute. Her books include Feeling Power: Emotions and Education (Routledge 1999), Democratic Dialogue in Education: Troubling Speech, Disturbing Silences (Peter Lang, 2004) and Digital Media and Democracy: Tactics in Hard Times (MIT Press, 2008).