You need not die today.
Stay here — through pout or pain or peskyness.
Stay here. See what the news is going to be tomorrow.
– Gwendolyn Brooks

On Monday night, I heard a 19 year old young black man say that he wasn’t afraid to die for justice in Ferguson. Some in the assembled multi-racial audience applauded. I wanted to throw up.

What does it mean to be willing to die for a cause in a society that already considers you to be hyper-disposable? Your evisceration, your death is desirable and actively pursued. What if the revolutionary act in such a society, in such a world, is to live out loud instead? Or simply to live.

I wanted to yell: “No. Stay a while. We don’t need any more black 19 year olds in caskets.” How are we to reconcile a call for the state to stop killing us with a willingness to die for that end?

I can’t get the clapping out of my head.

Why were they clapping? I can’t stop thinking of it.

On Saturday, while we were in St. Louis, my comrade Kelly took a photo of a young woman standing on the bed of a truck exuberantly chanting: “Back up! Back up! We want freedom, freedom! All these racist ass cops, we don’t need ’em, need ’em!” 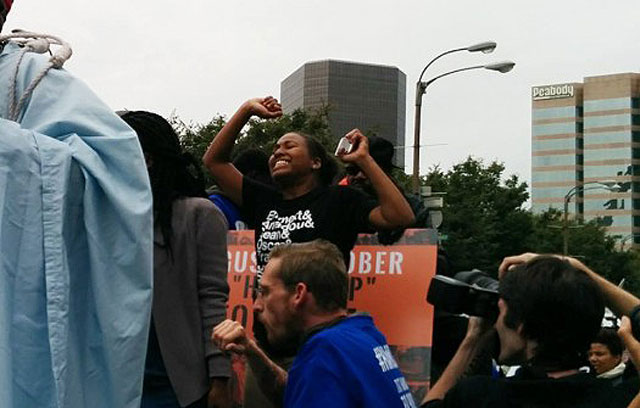 Some people chanted along with her while the familiar refrain of ‘hands up, don’t shoot’ reverberated across most of the crowd. Fists up. Voices loud. All around me was love and life. I saw the young woman as I marched past her. In looking at the photograph later, I thought that it captured the youthful resistance that permeated the St. Louis march/rally and has characterized so much of this Ferguson moment. 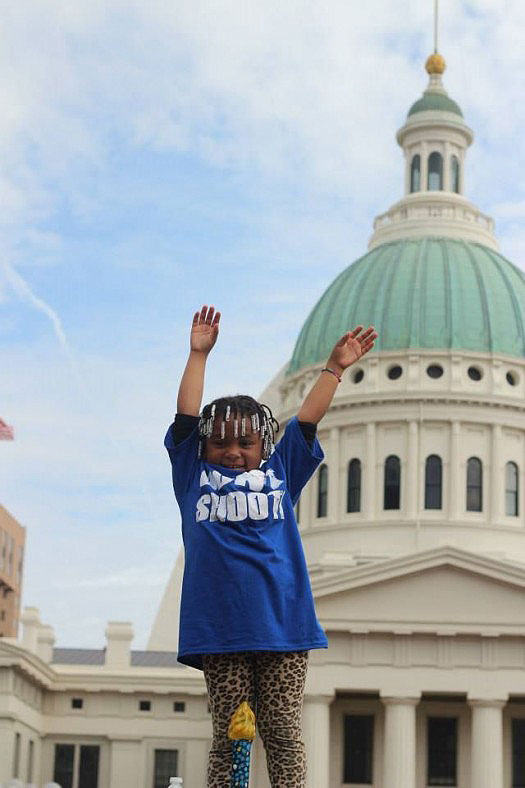 When the young man on Monday’s panel described justice as the prosecution of officer Darren Wilson, the man who killed Mike Brown, I felt as if I was dissolving. Maybe I left my body for a second or a minute or I don’t know how long. This is the ‘justice’ for which this young man was prepared to die? This small, narrow, insignificant in the larger scheme of the world thing? We have failed our young by not creating an expansive idea of justice. And then I thought about the fact that his peers had mentioned that they had “nothing” to begin with and I knew that justice would center on addressing that as THE issue.

I kept my mouth shut. I hope that the young man stays in the struggle and that he like so many others in Ferguson and across the country refuses to be quiet. Most of all though, I wish for him a long and healthy life in a future with more justice and some peace.

Graves grow no green that you can use.
Remember, green’s your color. You are Spring. – G. Brooks