Imagine having your children, the source of all strength and love in your life, ripped away from you and put up for adoption because of one mistake that took place after you endured violence and abuse your whole life.

This is exactly what’s happening to Olivia, a brave mother I first met last year.

Together, we can stop this injustice.

Originally from Mexico, Olivia migrated at the age of 16 to the US to break free from an abusive father who physically and emotionally assaulted her and two older sisters. As an undocumented migrant worker picking seasonal fruits and vegetables in the fields of central California, she never received the support she needed to heal from this trauma.

While moving around within agricultural regions to support herself and her mother in Mexico, Olivia started a family. As a young mother of four children, three daughters and a son with autism, all US citizens, Olivia once again escaped domestic violence. This vicious cycle of violence followed Olivia, and she wondered if this is what love looks and feels like. She did not know how to ask her abusive partners to stop.

She thought her voice did not matter. She wanted her abusers to stop abusing her in front of her children. The physical, verbal, emotional and sexual abuse continued for years. Once, Olivia was left almost unconscious with a broken nose, bloody lip and black eye. She reported the violence, and thus qualifies for a protection called a U Visa.

One night, after working almost 10 hours out in the fields, and with constant harassment from her ex-partner, Olivia, blinded by rage and stress, disciplined one of her daughters with a belt, leaving a visible mark on her arm. Even though Olivia apologized, and tried to mend her mistake, the next day her daughter’s teacher noticed the mark, and immediately called Child Protective Services. Olivia was arrested in November 2014, convicted of child aggravation, and her children were placed in separate foster homes. She served two and a half months in detention and was released early from Tehama County Jail for good conduct.

But rather than giving Olivia and her children the opportunity to heal, President Obama’s Priority Enforcement Program targeted Olivia for deportation. Immigration and Customs Enforcement agents arrested Olivia and trapped her in various detention centers.

To be sure, Olivia’s mistake is not justified. However, we must look through a transformative justice lens, identify the pain and trauma that cornered Olivia in that moment and find solutions. What did Olivia need instead of criminalization, the denial of her parental rights and separation from her children? How did this system fail Olivia, her children and other Olivias out there?

I met Olivia when another detained survivor of violence connected us who she had been left in immigrations enforcement van for hours without food, water, fresh air or restrooms. While some folks passed out, they held tight to one another, despite their dizziness, nosebleeds and dehydration.

Inspired by Olivia’s courage, I decided to help her get the second chance she had been denied. 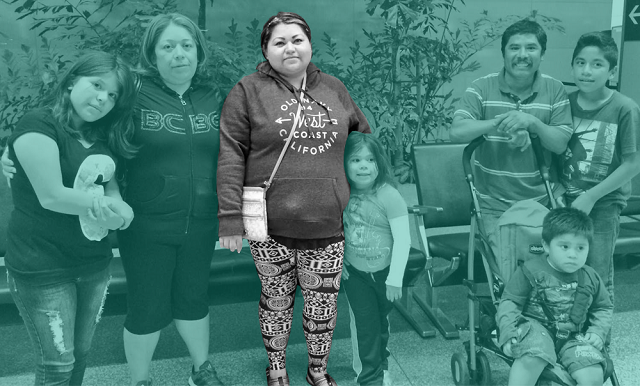 From an online petition, to a hunger strike which Olivia courageously joined, we tried everything.

But in December 2015, we got terrible news: Olivia had been deported. This felt like a deep cut in my chest. I was sick to my stomach. Olivia found herself in Tijuana without her children. She was heartbroken.

While Olivia was detained, her sisters Perla and Martha were not allowed to see their nieces and nephew due to their undocumented status.

But amazingly, Olivia did not give up. And neither did we.

For six months Olivia lived in Mexico, close to her perpetrator, re-opening unhealed wounds. Olivia tried to adjust, missing her children each day and surviving robbery, assault and threats. Despite this trauma, health issues and clinical anxiety so acute that she was prescribed medication, nothing compared to the pain of not being with her children.

After an emotional rollercoaster, something precious happened. Through a joint organizing effort between statewide organization and local coalitions, Olivia was granted humanitarian parole for four months to return to the US to fight for the custody of her children.

But hope soon turned to heartbreak again. At a hearing in the Tehama County Superior Court on June 9, 2016, Olivia wished with all her heart to get a second chance. However, she was coldly denied, publicly humiliated and mocked by the social workers, and the judge decided to move forward with the adoption process. Olivia has a narrow window to appeal this crushing ruling — but the pain of being torn from her children weighs heavily on her.

Olivia exemplifies the endless struggles of our intersectional undocumented communities. People are viewed as disposable, stripped of their humanity, caged in for-profit detention centers and denied their parental rights by government agencies. Women, children, trans and queer folks, survivors of domestic violence — the most vulnerable — should be protected, not punished, shamed, demoralized and deported.

When will Olivia get the second chance we all deserve?

Share
This article may not be republished without permission from Truthout.
Edna Monroy

Edna Monroywas born in Iguala Guerrero, México. She came to the United States at the age of 12 in 2001 to reunite with her family. She grew up in Westmont, an unincorporated area of South Los Angeles. Despite her language barrier as an ESL student while in middle and high school, she managed to graduate with high honors, and attend UCLA in 2007.