A few years ago, while clearing dried broccoli stalks from the tired soil of our land at Soul Fire Farm in upstate New York, I received a cold call from Boston. On the other end was a Black woman, unknown to me, who wanted to share her story of trying to make it as a farmer.

Through tears, she explained the discrimination and obstacles she faced in a training program she’d joined, as well as in gaining access to land and credit. She wondered whether Black farming was destined for extinction. She said she wanted to hear the voice of another African-heritage farmer so that she could believe “it was possible” and sustain hope.

The challenges she encountered are not new. For decades, the US Department of Agriculture discriminated against Black farmers, excluding them from farm loans and assistance. Meanwhile, racist violence in the South targeted land-owning Black farmers, whose very existence threatened the sharecropping system. These factors led to the loss of about 14 million acres of Black-owned rural land — an area nearly the size of West Virginia. 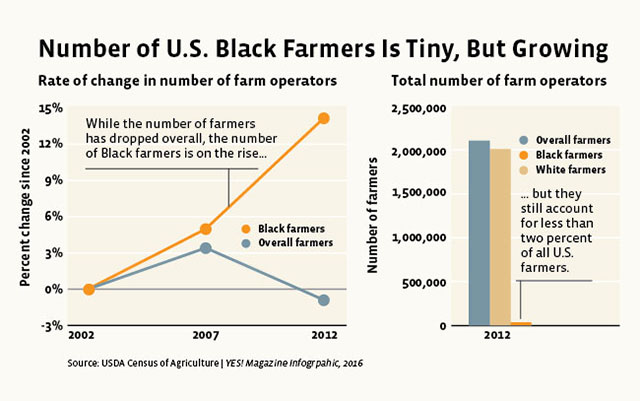 In 1982, the US Commission on Civil Rights extrapolated the statistics on land loss and predicted the extinction of the Black farmer by the year 2000.

They were wrong. While the situation is still dire, with Black farmers comprising only about 1 percent of the industry, we have not disappeared. After more than a century of decline, the number of Black farmers is on the rise.

These farmers are not just growing food, either. The ones you’ll meet here rely on survival strategies inherited from their ancestors, such as collectivism and commitment to social change. They infuse popular education, activism, and collective ownership into their work.

And about that woman who called me from Boston? Years after we first spoke, I called her back. Turns out, she is still at it. 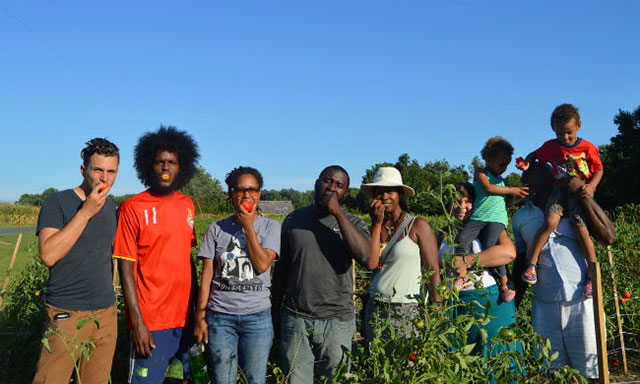 About 80 miles southeast of Baltimore, Black Dirt leases 2 acres that long have been home to the Black freedom struggle. Harriet Tubman once rescued her parents and nine other people from enslavement in this place, which was one of the first stops on the Underground Railroad.

The 10 farming-collective members who work here today revere Tubman’s example and work to continue her legacy of revolutionary social change. In addition to growing natural food for markets in DC, Baltimore, and Philadelphia, they host hundreds of people each year for activist training programs. They continue the farming practices of their ancestors, such as “going through together,” a southern Black practice of working collectively in neighbors’ plots and sharing the harvest. They are also part of the North Carolina-based Seed Keepers Collective, and focus on preserving seeds of the African diaspora, including millet, sorghum, cotton, and sweet potatoes.

“It’s like jazz music in a sense,” Snipstal explains, referring to Black Dirt’s collaborations with like-minded farmers around the country. “We are always riffing off each other, even if we don’t tell one another.” 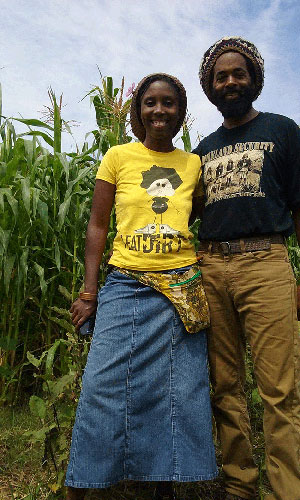 Collaboration is also key for the nine members of the Grow Where You Are collective, who operate a 3-acre farm and food forest in Atlanta, as well as a 5-acre farm in the nearby rural community of Stone Mountain.

Here, some of the most important collaborators are churches. Local churches own two-thirds of the group’s urban farmland; their members and food pantries receive a portion of the produce. The collective is vegan, and members use no animal products in their cultivation of fruits, vegetables, and nuts.

Since 2009, Grow Where You Are members have trained more than 100 urban farmers and helped start 18 urban farms, 14 school gardens, and 40 home gardens. They also prepare free vegan feasts for the local community, where neighbors gather for to learn about health, make new friends, and even practice capoeira — an Afro-Brazilian martial art form that brings together elements of dance and acrobatics. Founder Eugene Cook says these events show “what a sovereign community can feel and be like.” 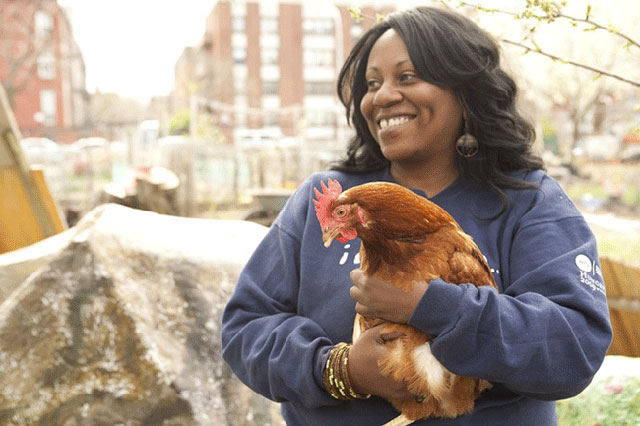 Yonette Fleming’s passion for agriculture comes through in the poetic urgency of her words. So it’s surprising to learn she once tried to escape it. She was raised in Guyana, where her family cooperated with indigenous communities to grow coconuts, sugar, rice, and other crops. She took a detour into corporate America before finding her way back to the land.

“I came to the earth with an open heart and said, ‘Teach me, mold me, shape me, inform me with a new intelligence,'” explains Farmer Yon, as her friends call her. She went on to join the Hattie Carthan Community Garden and founded its first farmers market.

For Fleming, farm work is an essential part of healing from the trauma of racism. Among her Brooklyn neighbors she found Black elders who had worked as sharecroppers, as well as young people who’d never set foot on a farm and told her they wanted nothing to do with dirt. She brought the two groups together in a series of monthly storytelling circles in the garden, which built connections between the generations and addressed the young people’s aversion to the land. Students who participated went on to create several discussion and action groups in their schools to address food sovereignty — that is, the right of all people to have a say in the food system. One of them got his food-safety license and is opening a restaurant.

Fleming is also a trained priestess and uses the land as a source of healing for women. After learning that almost one-quarter of women in the United States take antidepressants, she created healing rituals that incorporate drumming, farm-grown herbal medicine, ancestor reverence, building of traditional clay ovens, and artisanal bread baking. 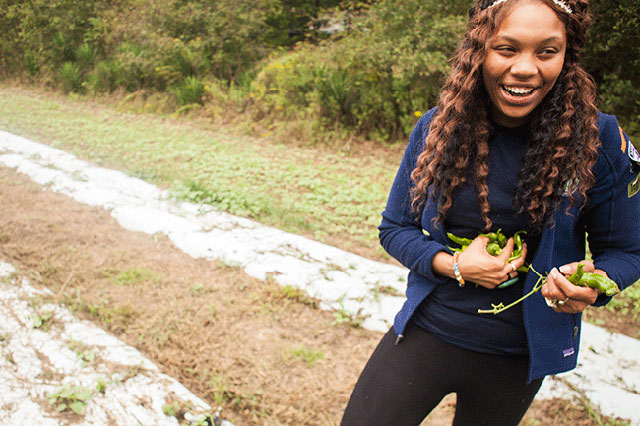 Lindsey Lunsford gathers peppers at the Tuskegee United Leadership and Innovation Program’s community garden. Lunsford has been farming for two years and has wide-ranging plans for the future; her vision of a healthy community keeps her motivated. (Photo: Wil Sands)

The educator and activist Booker T. Washington once sent a letter to every resident of Tuskegee’s Greenwood neighborhood, encouraging them to grow home gardens in order to build self-sufficiency. Through her work with TULIP, Lindsey Lunsford is continuing his legacy.

Lunsford is just getting started as a farmer, but her vision of a healthier community keeps her motivated. “We have a 24-hour McDonald’s, but we don’t have a 24-hour health care facility,” she explains.

When young people come to work in the garden, she starts off by asking them to draw a picture of Tuskegee, where more than 28 percent of the population lives below the poverty line. Many draw scenes of violence, she says, often with the McDonald’s restaurant at the center of the image. “That’s what we are working to change.” 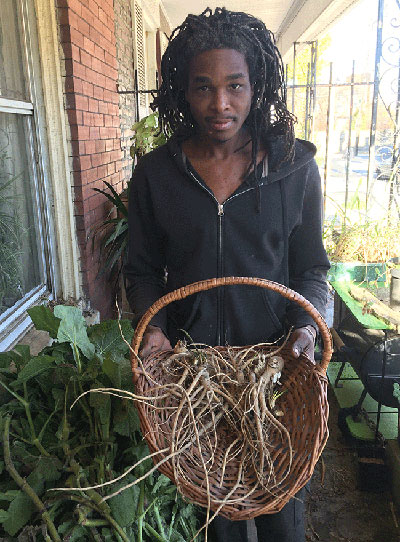 Before the “food justice” movement existed in the United States, Black farmers in the Mississippi Delta were cooperating to feed the community. Raised by farmers in that movement, Chris Bolden-Newsome assumed that growing food was something everybody did and was shocked to find otherwise when he moved north. He now manages a 50-bed community garden in his current home of Philadelphia, where he reconnects Black people to their agricultural heritage.

Twelve teenagers are employed at the community farm each year, and Bolden-Newsome teaches them aspects of Black culture they may not have been exposed to, such as traditional recipes, seed keeping, liberation songs, and Southern farming techniques.

“Old people tell me they grew up with hatred of the South, and growing food reminded them of bad old days,” Bolden-Newsome explains. He believes the younger generation has picked up that hurt and resentment, but hopes that learning more about Black traditions will help to heal the trauma that separates them from the land.

“As Black farmers, we need to be more than just growers of food,” Bolden-Newsome says. “We have to be teachers of culture and healers of trauma. That is how we survive.”

Leah Penniman is a farmer and educator based in the Albany, N.Y., area.