This was the mood that characterized the atmosphere of the Stop Watching Us rally on October 26, 2013, organized by broad coalition of more than 100 public advocacy groups from across the political spectrum, including the American Civil Liberties Union, the Electronic Frontier Foundations and Color of Change, and attended by thousands. The purpose of the rally, which began as a march from Union Station to the reflecting pool outside Capitol Hill, was to deliver a petition to Congress demanding an end to NSA mass spying.

A White-Centric Movement? Not Even Close 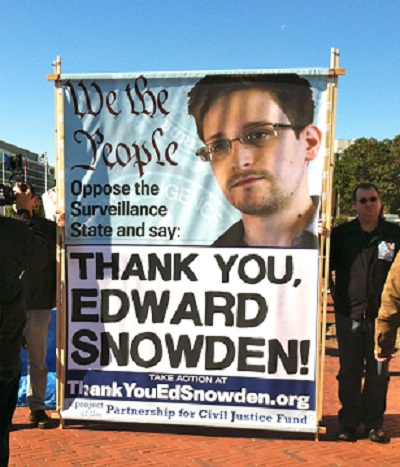 Attendees of Stop Watching Us rally hold up “Thank You Edward Snowden” sign. (Photo: Rania Khalek).Throughout the day, Freeman’s voice could be heard praising whistleblowers Edward Snowden and Chelsea Manning or reminding the crowd of the racial significance of surveillance history. As a result, the intersection of surveillance and race remained at the forefront of the day’s event, which the crowd happily welcomed with applause. Yet somehow this was lost on most journalists in attendance.

Despite the crowd’s diversity and repeated acknowledgements of America’s sordid history of aggressive spying on communities of color, the few outlets to cover the rally portrayed it and the movement against NSA surveillance as one dominated almost exclusively by privileged white people.

USA Today managed to interview white men only and failed to quote a single speaker of color. Neither the Huffington Post nor The Guardian fared any better. To be fair, big-name speakers, such as Jesselyn Radack, director of the Government Accountability Project, and Thomas Drake, former NSA senior executive turned whistleblower, were featured prominently in news reports most likely because they are well-known. But that still doesn’t explain why almost all the attendees interviewed were white when the crowd was far from homogenous.

Not a single media outlet bothered to mention the moving and powerful performance of Malachi “Malpractice” Byrd, a member of the DC Youth Poetry Slam Team whose piece began, “I pledge civil disobedience to the flag of the hypocritical tyrants that expect us to assimilate and to the republic, which somehow stands, as one nation, under many gods, of individuals stripped of their liberties and in need of justice for all.”

But it was Slate political reporter Dave Weigel who seemed to have attended a different rally altogether. “Among the attendees: More than a few Tea Partiers and young, small-l libertarians, possibly equaling those who could be put on the left,” Weigel reported.

While there’s certainly nothing wrong with recognizing the presence of right-leaning civil libertarians who value privacy, this portrayal is inaccurate and ignores the voices of those who suffer the most from the NSA dragnet.

Surveillance State Was Built on Targeting Communities of Color

Two days prior to the Stop Watching Us rally, Busboys & Poets, a progressive DC restaurant, hosted “Enemies of the State? Government Surveillance of Communities of Color,” a panel discussion organized by Free Press, the Center for Media Justice and Voices for Internet Freedom. The room was packed mostly with activists of color concerned about the implications of NSA surveillance on already-marginalized and increasingly surveilled communities. 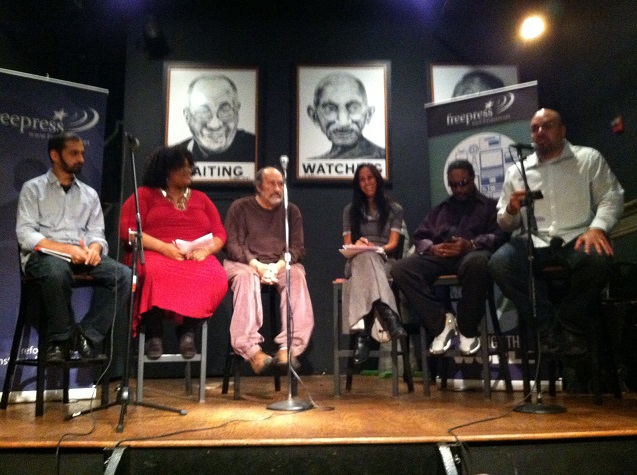 Steven Renderos, national organizer for the Center for Media Justice, who helped put together the panel, told Truthout that examining the legacy of surveillance in communities of color could help lead to solutions. “It’s critical to understand the history so we can learn how to dismantle it,” Renderos said.

“Those of us from marginalized communities grew up in environments very much shaped by surveillance, which has been utilized to ramp up the criminal justice system and increase deportations,” Renderos said. “It’s having real consequences in our communities where children are growing up without parents in the home and families are being torn apart through raids and deportations, a lot of which is facilitated through the use of surveillance.”

Panelist Fahd Ahmed, legal and policy director for the South Asian-led social justice organization Desis Rising Up and Moving, argued that mass surveillance is the predictable outgrowth of programs that have targeted marginalized communities for decades.

“Just by the very nature of [the United States] being a settler-colonialist and capitalist nation, race and social control are central to its project,” Ahmed said. “Anytime we see any levels of policing – whether it’s day-to-day policing in the streets, surveillance by the police or internet surveillance – social control, particularly of those that resist the existing system, becomes an inherent part of that system.”

But, he warned, “These policies are not going to be limited to one particular community. They’re going to continue to expand further and further” because “the surveillance has a purpose, which is to exert the power of the state and control the potential for dissent.”

Seema Sadanandan, program director for ACLU DC, acknowledged the collective resentment felt by people of color who are understandably frustrated that privacy violations are only now eliciting mass public outrage when communities of color have been under aggressive surveillance for decades.

“The Snowden revelations represent a terrifying moment for white, middle-class and upper-middle-class people in this country, who on some level believe that the Bill of Rights and Constitution were protecting their everyday lives,” Sadanandan said. “For people of color from communities with a history of discrimination and economic oppression that prevents one from realizing any of those rights on a day-to-day basis, it wasn’t a huge surprise.”

But Sadanandan argued that NSA surveillance still “has particular concerns for communities of color because of their unique relationship to the criminal justice or social control system, a billion-dollar industry with regard to, for example, border patrol or data mining as it’s applied to racially profile.” Sadanandan warned that NSA surveillance more than likely would strengthen that system of control.

Former political prisoner and Black Panther Party leader Dhoruba Bin-Wahad declared that “the United States has moved into a full garrison police state,” which “has been exported and institutionalized all over the globe.” His antidote? “We have to put together an international movement to check the development evolution of the modern national security state,” which requires linking globalized labor exploitation to the prison industry to the war on terror to institutionalized white supremacy rooted in the “European-settler state.” Bin-Wahad was skeptical about the ability of “legal” remedies to reform the system. “You cannot make the police state better. You cannot reform white supremacy. We need to abolish the system as it now stands,” Bin-Wahad said.

Bin-Wahad’s most scathing indictment was of African-Americans in positions of power. He referred to Barack Obama and the Congressional Black Caucus as “black enemies of black people” for sanctioning drone strikes and NSA spying” and called Obama “the worst thing to happen to black people since Reconstruction.”

At the rally, Steve, who traveled from Philadelphia and declined to give a last name, said that growing up as a black man in South Africa instilled in him a desire to speak out against rights abuses. “I feel sensitive when I see here in America people having their rights infringed upon,” he told Truthout. “The US government must act consistently with what it preaches around the world. They can’t preach to the world about human rights if they’re not providing them to the people over here.”

Anthony Wilson, who traveled by bus from Philadelphia with the software company ThoughtWorks, told Truthout at the rally that despite being an enthusiastic Obama voter, he is disappointed in the president. “I believed that when Obama was elected things would be more open, but to my surprise it went in the other direction.” Wilson also expressed frustration with his own community, saying, “A lot of black people give Obama a pass.” “When I voted for him, I thought I was voting for a Martin Luther King or a Malcolm X. But he is not progressive enough. He has no intention of changing anything. And if he hasn’t done it by now, then he never will.”

Renderos expressed similar sentiments. “A lot of communities of color are deferring to the president with very blanketed support for his policies.” 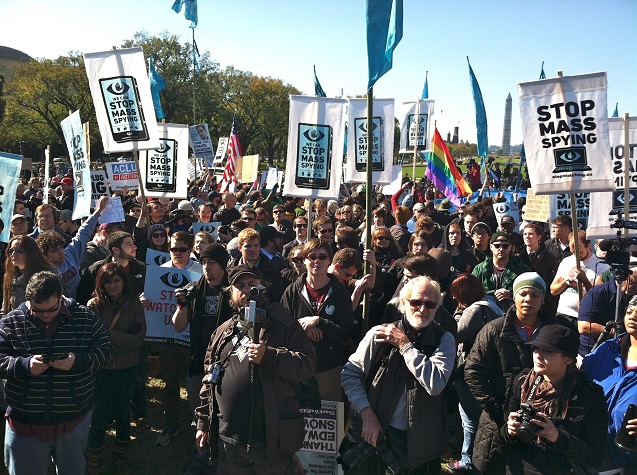 Renderos said organizing and educating can help combat this. “When the framing around surveillance is posited around the first and fourth amendment, that’s unfortunately a reality that doesn’t necessarily resonate with communities of color. The fourth amendment has been eroded through programs like stop-and-frisk and Secure Communities,” he said. “We need to build a consensus around the increase in deportations and the jail population by communities of color and how this is intrinsically connected with the increase of a surveillance state here in the US.”

Ignoring activists of color does more than just rob marginalized communities of having a voice in the NSA surveillance conversation. It also overlooks potential strategies for fighting it.

Renderos put it best: “We need to learn from history about how movements like the Black Panther Party, American Indian Movement and the Brown Berets responded to living under a surveillance state.”

Share
Copyright, Truthout. May not be reprinted without permission.
Rania Khalek