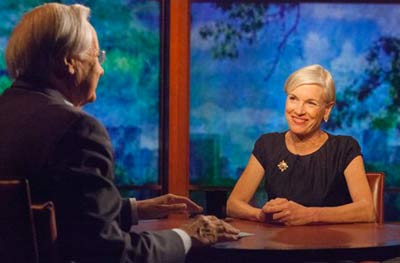 Cecile Richards, president of the Planned Parenthood Federation of America. (Photo: Moyers & Company)Roe v. Wade, the Supreme Court’s landmark decision establishing a woman’s right to an abortion, was issued 41 years ago. Despite consistent public opinion to the contrary, conservatives and the religious right have patiently and relentlessly campaigned against it for decades. And recently, their efforts are finding some success. Two major rulings by the Supreme Court this last session limited health insurance coverage for contraception and gave protesters increased rights to demonstrate outside abortion clinics. Several states — especially in the South — in the name, legislators say, of women’s health, have passed regulations that creatively use technicalities to force clinics to close.

“It’s better to be a corporation today than to be a woman in front of the Supreme Court,” Richards tells Bill. “I think that the Hobby Lobby decision is just the beginning of giving corporations free license to obey those rules and laws that they agree with, and not ones that they don’t.”

Richards has been an organizer of low-wage janitors, hotel and health care workers, the founder of the Texas Freedom Network, which defends civil liberties and religious freedom in her native state, and a deputy chief of staff to the Democratic leader in the House, Nancy Pelosi.