Sadly, we’ve entered into a world where the word “corruption” has become inadequate to describe the many and varied practices of profitable abuse by the powerful and connected of their inferiors. Like the popular (and sadly apocryphal) accounts Inuit with their numerous words for “snow,” we need more refined and granular terminology to describe various types of corruption. Hugh uses “kleptocracy” but that’s a name for a system of governance, not particular behaviors within that system.

I’m reluctant to make an object lesson of a large scale and, within its limits, well researched report by Transparency International (see end of the post for the full report). It surveyed 114,000 people in 107 countries. The study concluded that corruption had risen in most countries since its last poll two years earlier (the countries reporting a fall in corruption were Belgium, Cambodia, Georgia, Rwanda, Serbia, Taiwan). On a scale of one to five, with one indicating corruption was not a problem at all and five signifying a very serious problem, the average response across all countries was 4.1.

Yet how did the survey define corruption? In practice, they only asked about two types of behavior: bribes and “when decisions to allocate public resources are distorted by money, power, access, or some combination of the above.” So in cruder terms, it’s pilfering of the public purse. But even then, the survey didn’t hone in crisply on the issue (for instance, question 3 was “In your dealings with the public sector, how important are personal contacts and/or relationships to get things done” and question 4 was “To what extent is the country’s government run by a few big interests looking out for themselves?”).

Now in fairness, these questions might be taken as reasonable proxies for corruption. But the focus of the report on bribery, which is a big issue in many countries (over 1/4 of the respondents reported paying a bribe in the previous year, including 7% of the people surveyed in the US, 5% in the UK, 5% in Italy, 7% in Switzerland (?). France and Germany appear to have been exempted from this survey.

The problem is that this model of corruption implicit in this survey appears to be a developing country model of corruption, in which you can have abusive local headmen running towns of local offices as personal sinecures, and various levels of organized crime either controlling certain services or competing with government in providing “protection” (not that we don’t have that happening in advanced economies too, but we see it as an anomaly). But in the US, we have institutionalized corruption, and it includes form that don’t even register on the Transparency list.

1. The revolving door, which leads to outcomes like regulations not being rigorously enforced or wink-and-nodding through rent-extraction mechanisms being waved in during rulemaking. This isn’t a budgetary allocation, which is what Transparency worries about, but it’s often more valuable.

2. The erosion of property rights. If you can’t have your property rights upheld in court, you effectively don’t have property rights. Homebuyers learned in the bust that if they have a mortgage on their house, their ownership rights are in fact seriously qualified even if you pay your mortgage on time. The media has reported on cases where homes with paid off mortgages have been foreclosed upon, or where servicers have refused to correct errors in their records, or similarly sent back validly submitted, timely payment and proceeded to foreclose. I have a colleague, an attorney and securitization expert, who says 10 years ago he had a problem with a servicer where he sent in two months payment while on vacation and was sure to space them out a little. Even so, two were credited to one month and the following month was treated as a missed payment. He was able to get it straightened out (with some damage to his credit report) but he says if that happened now, he is certain he would have been foreclosed on.

And how about being compelled to enter into one-sided contracts? You can’t participate in society without having a credit card (if you have a job that requires travel, your employer will expect you to buy airfare and rent cars). How about a cell phone contract (you can semi opt out with a more costly prepaid phone).

And it isn’t just small fry that are getting the short end of the stick. Investors in mortgage backed securities effectively had no ability to get courts to enforce their rights. Servicers have been systematically looting MBS via refusing to do modifications and via excessive charges of every variety imaginable (the few investors who have tried suing have had very little in the way of success; the big exception is bond guarantors, whose had stronger rights to pursue certain types of litigation than mortgage bond investors). Similarly, the business press relentlessly spouts the myth of shareholder democracy when the academic literature describes public companies as a classic principal-agent problem (as in the principal, meaning shareholders, can’t adequately control their agent, so the agent does what is best for him, not for his nominal principal).

3. Government authority used to promote corporate interests at the expense of individuals, vitiating the right of free speech and peaceable assembly. I’m sure readers can add to this list, but here are some starters:

Government crackdowns on protests and surveillance of protestors, even when the issues at stake are still in play politically (Keystone is a classic example, or the criminalization of photographing of factories and labs where suspected animal abuse takes place). Remember the Bank of America chalk case?

Despite the fact that their questions do allow for the idea of an oligarchical takeover of government, their remedies still assume the public has some sway. Transparency has a chipper section at the end where they say 2/3 of the respondents believe “ordinary people can make a difference” and 87% of the respondents say they’d be willing to “get involved” (I have to tell you, having done survey research, that this sort of question will elicit unrepresentatively positive responses. People are much more willing to say they’ll do something than actually do it). But how much do you think these types of action will move the needle in the US or other advanced economies? 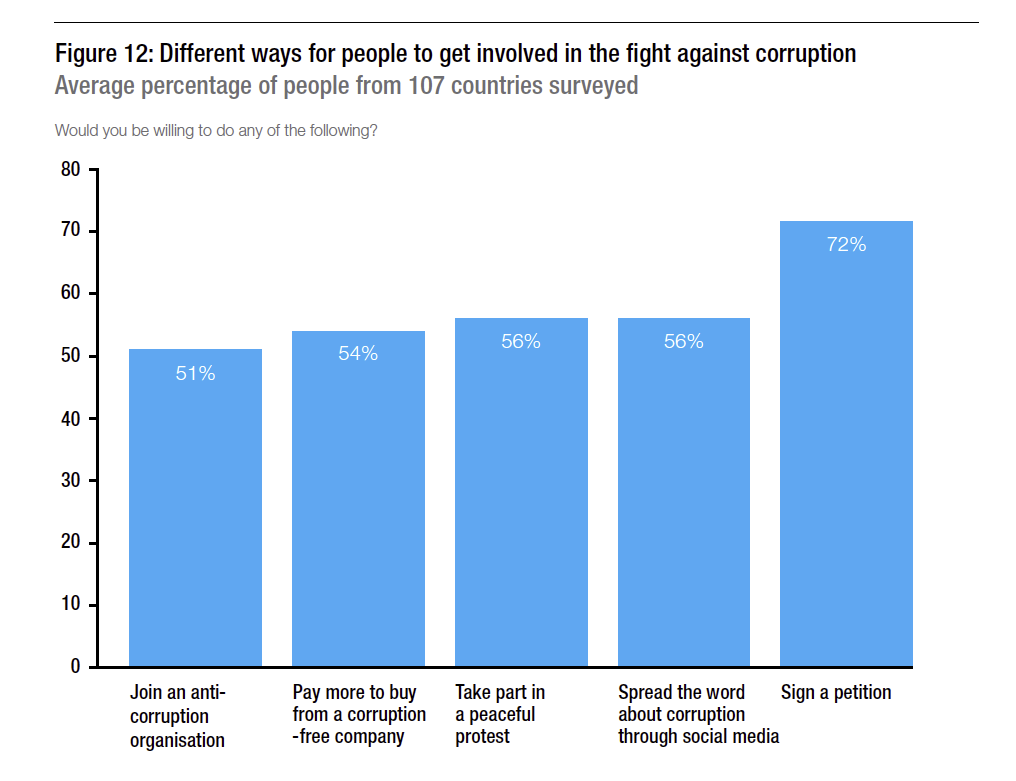 People in the US still shop at Walmart, for instance, and predictably, the measure most Americans said they’d take, signing a petition, is the least effective.

Perhaps I’m being too cynical, but there is a failure to recognize that the fish here are rotting at the head. Whistleblowers, even with whistleblower protections a matter of the law, are as a matter of course fired on trumped-up charges. Their concerns typically are either ignored entirely or are treated by management as an warning to tidy up the records. Overwhelmingly, large companies view performance as paramount and don’t ask many questions of a manager or executive who delivers the goods. I’ve seen multiple examples of people who engaged in questionable conduct at Goldman and McKinsey back in the 1980s when both were seen as models of well managed, upstanding firms and the general standards for behavior were much more stringent than now. Looting and abuse have become pervasive and the only questions now seem to be of degree, not of kind.

At a minimum, I hope readers will help come up with more exact codification of the various flavors of corruption. Orwell was correct to focus on the debasement of language an important tool in subjugating a population. Confucius focused on exact terminology as critical to running a state well:

Or the more common recap of this discussion: The beginning of wisdom is to call things by their proper names. We need to take our language back.