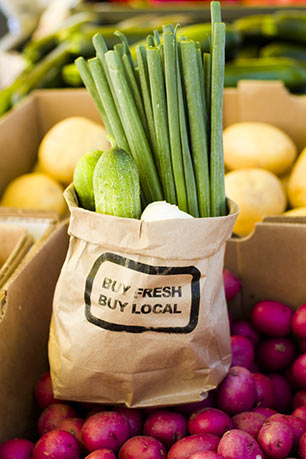 (Image: Locally grown via Shutterstock)The local foods movement has become much more than a short-lived dietary or environmental trend. Can it actually fuel the new Southern economy?

The term “locavore” has become ubiquitous since appearing in the American vernacular about ten years ago. It represents a rapidly growing movement of people choosing locally produced food rather than packaged goods that traveled hundreds of miles to market. Last year, the local-food economy was valued at nearly $12 billion. According to the Department of Agriculture, the number of farmers markets rose 76 percent from 2008 to 2014. Direct-to-consumer food sales increased threefold between 1992 and 2007, twice as fast as overall agricultural sales.

The USDA announced $35 million in grants to support local and regional food systems. That includes $13.3 million to promote farmers markets and community supported agriculture, as well as $11.9 million to promote food hubs, aggregation centers, local processors and farm-to-institution programs. The USDA is also awarding $8.1 million in grants to enhance SNAP operations at farmers markets so low-income families can access fresh, local food. The grants are aimed at boosting market opportunities for small and mid-size producers, stimulating rural economies and improving health. Organizations across the South have been putting that theory into practice for years.

Local food systems are emerging as a promising piece of community economic development and a key component of Appalachia’s transition away from extractive industries. The Foundation for Appalachian Kentucky (FAKY) is one of the recipients of the USDA’s Local Food Promotion Program grants. FAKY will use the funds to assess the community food system, conduct a feasibility study and design a business plan. The Appalachia Funders Network’s Food Systems Working Group is leading philanthropic efforts to support the local foods movement.

Farther South, McIntosh SEED is helping shape a similar network in coastal Georgia and beyond. “We have a lot of health conditions here in our community – folks are not having access to local foods – so we created a farmers market,” said Executive Director John Littles. “We try to open markets for small-scale farmers to be able to sell their produce directly. We work with local restaurants. … And on a larger level, we work with folks in Mississippi and Alabama in building value chains and getting small-scale farmers certifications that they may need…whatever it takes to get into the market, to sell institutionally so some of our farmers are meeting demand with Walmart, with local school districts, food chains, Sysco and Red Diamond. And it’s changing their economic conditions.”

In the persistently poor Black Belt counties of Alabama, Mississippi and Georgia, one of the ways the Southern Rural Black Women’s Initiative generates income for women is through an agricultural network that connects farmers with markets. SRBWI also worked with municipal leaders and community organizations to repurpose an abandoned school into a USDA-certified commercial kitchen for its members. “We work with farmers and trying to help women produce food that’s marketed to the school system and through farmers’ markets and other outlets in the area,” explained Cofounder Shirley Sherrod. “Many of them are widows who own land and need to derive an income from that land. … We have a community foods project and that’s in 22 counties.”

The Federation of Southern Cooperatives/Land Assistance Fund helps farmers widen their profit margins through credit unions and the cooperative model. “We’re talking about creating a form of wealth that people own and control, that would help communities to stabilize. We’re talking about sustainable farming, sustainable communities,” said former Executive Director Ralph Paige. “Someone will come to us and say, ‘I’ve got three acres of land. Can I make a living off it?’ You won’t get wealthy off it, but you can subsidize your income off it. You can grow produce and sell it to a local farmers market. You can get three or four other people to do it as a co-op, then you don’t have to own a tractor, per se. How do you use this kind of thing to make a difference for yourself in your life and livelihood for your family?”

Littles says the renewed focus local foods revitalizes communities and improves health while meeting the demands of a hungry nation. “People need food. Where they get it, we can help shape that in this country.”

McIntosh SEED Program Manager Cheryl Peterson describes how the success of a single farm can transform a community: