A global battle is being fought over the future of the world’s food. Hear from the women on the front lines in Seed Sovereignty, Food Security: Women in the Vanguard of the Fight Against GMOs and Corporate Agriculture. These seed keepers, food producers, scientists, activists and scholars are committed to building a food system that is better aligned with ecological processes, human health and justice for all. Order this amazing book by donating to Truthout today!

The following is a Truthout interview with Vandana Shiva.

Mark Karlin: Your anthology focuses on women writers who “are in the vanguard of the  fight against GMOs and corporate agriculture.” Why are women so  important in showing “the way to have both bread and freedom”?

Vandana Shiva: The anthology has contributions from women seed savers, organic farmers, women scientists and mothers. Women have historically been the seed experts across societies. Even today, women are leading the movement for seed saving as the  contributions in the volume show. Women scientists who have contributed to the volume are independent and courageous. They are not locked into the clubs of corporate science. And mothers  are the ones who have to take care of their children when they fall ill  because of chemicals and GMOs in food.

What is the relationship between the industrial paradigm of agriculture  and the war industry?

Industrial agriculture is a product of war, both at the paradigmatic  level, and at the level of instruments, tools and technologies.  The synthetic nitrogen fertilizers were made in the same factories that  made explosives. That is why fertilizer bombs are often used in terrorist attacks. The precursors of pesticides were the poison gases used in the war and  nerve gases used in gas chambers.

Agent Orange was a herbicide that was used in the Vietnam war.  In terms of a paradigm, industrial agriculture is based on the war  mentality that the “other” is an enemy that should be exterminated. It could be the biodiversity exterminated as weeds by herbicides, or  pollinators and friendly insects exterminated by pesticides and  pesticide-producing GMOs.

What is the so-called “Green Revolution” and how does it relate to  cancer?

The so-called Green Revolution is neither “green,” nor “revolutionary.” It  was the name given to chemical industrial agriculture when it was  imposed on the Third World. The Green Revolution was first introduced  in the fertile and prosperous land of Punjab in 1965. It promoted  monocultures of rice and wheat varieties bred for taking up more  chemicals. The monocultures and chemical varieties were vulnerable to  pests. This led to increased use of pesticides. The pesticides have led  to a cancer epidemic in Punjab. Today, there is a train that leaves from  Punjab to Bikaner, where there is a charitable cancer hospital — a train  referred to as the “cancer train”

How does agro-biodiversity bolster food security? 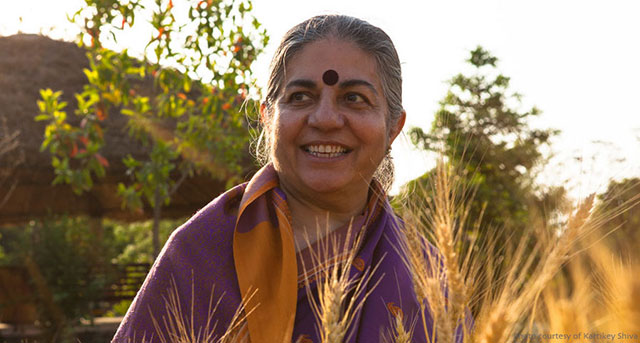 How does corporate-chemical agriculture contribute to global warming?

Fifty percent of all greenhouse gases are contributed by corporate-industrial  chemical agriculture and globalized trade. The chemical system is in fact a fossil agriculture, since it is dependent of fossil fuels. Nitrogen fertilizers, which are produced from fossil fuels, emit nitrogen oxide, which is 300 times more damaging to the atmosphere than carbon dioxide. Chemical industrial agriculture increase mechanization and use of fossil  fuels. Long distance transport adds “food miles” and carbon emissions. The destruction of diversity and increasing dependence on a few globally traded commodities has led to deforestation in Brazil, Argentina, Indonesia. Deforestation related to agriculture contributes to 15 percent of the GHGs.

Why is corporate propaganda that chemicals and seed engineering reduce  hunger wrong?

Corporate propaganda that chemicals and GMOs reduce hunger is wrong  because chemicals promote nutritionally empty monoculture commodities , which create a hidden hunger of nutritional deficiencies. It is wrong because high cost inputs make farmers indebted, and farmers in debt are hungry farmers. Of the 1 billion hungry, 500 million are farmers.

It is also wrong because GMOs do not increase yields. The yields come  from the original crop into which the introduced genes are added through  genetic engineering.

Finally, it is wrong because this model produced commodities, not food.  The largest expansion in GMOs has been in corn and soya. Most of the  corn and soya goes for biofuel and animal feed. Only 10 percent goes to food.  Commodities feed profits of corporations, not people.