Mariama Sonko is a farmer and organizer in Casamance, Senegal. She is the National Coordinator of We Are the Solution, a campaign for food sovereignty led by rural women in West Africa.

Traditional, small-holder peasant agriculture is done by women. Women are the ones who save the seeds – the soul of the peasant population. This is to honor what women have inherited from their ancestors: the conservation of seeds as part of their knowledge to care for the whole family and nourish their communities.

The green revolution introduced GMOs in Africa. Technicians and researchers come to tell our producers about agriculture from the outside. They tell us that these modern varieties of [GMO] seeds are going to increase our yield. So we will produce a lot, fill up our stores – but soon we will be sick and in the cemeteries. Isn’t it better to grow less, eat well, have good health, live a long life, and pay attention to the generations to come? We reject agriculture that pollutes with chemicals, pesticides, GMOs.

Achieving our goals is a difficult struggle because we have few resources fighting against multinational corporations who have a lot of money. But development in Africa can’t take place on the backs of Africans, and Africa can’t develop without looking ahead for the children.

We Are the Solution is a campaign in West Africa led by rural women from Senegal, Burkina Faso, Mali, Ghana and Guinea, though we are a campaign of both women and men. Our vision is to truly promote ancestral knowledge and put pressure on our government to take seriously the preservation of our peasant agriculture.

The campaign has three objectives. First is the use and promotion of traditional knowledge transmitted from generation to generation, which supports food sovereignty and the preservation of peasant seeds. The second objective is to restore national policies favorable to agroecological peasant farming. And the third objective is the promotion of African agricultural production. 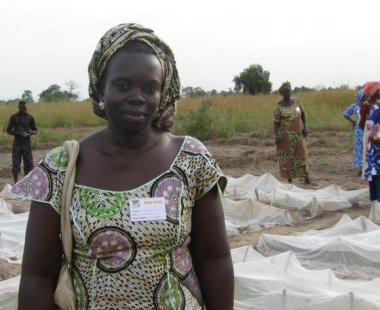 (Photo courtesy of Mariama Sonko)In the agricultural sphere, development rests in the hands of the women, and their role is being proven repeatedly. We Are the Solution raises awareness and consciousness, key to changing the mentality of the people, on the importance of women in family farming and agricultural production.

Women are the primary workers of the land and the majority of the workforce in agriculture, involved in every step of agricultural production: in the fields, 70% of African agriculture is done by women; in conservation, women are the ones making efforts to conserve the native seeds; in animal husbandry; in food processing; in marketing; in selling food at the local level; and as consumers.

In Africa, it’s said that land belongs to men as the heads of household. If women can’t access land, don’t have control of that land, or don’t own land, there is a problem. We are campaigning for women to have land ownership, and trying to raise this consciousness among men.

At the national level in Senegal, there’s a new law in effect that states that all citizens have the right to own land. But in practice, we still have the tradition. These women, most of whom are illiterate and rural, are socialized to believe that this longstanding culture can’t be changed. Our job is to [help them] understand they have the same rights as men, and that women owning land contributes to the well-being of the family and assures that they are fed.

At the local level, some women have risen up and demanded that land be put in their names, and now they are land-owners. Women’s associations have acquired blocks of land of up to one or two hectares, but frankly, there’s not much they can produce on that. To develop agriculture we need to cultivate larger plots or install irrigation, but this isn’t permitted because women don’t have a say in land use. There is idle land available and not enough men to work it all, yet they don’t want to turn it over to women. So the effort of raising awareness and advocacy goes on.

Women peasant organizations are leading the movement for seed and food sovereignty. We should eat what we produce and produce what we eat.

Agroecology protects all living things and treats nature as sacred. Our seeds are ancient, and each is tied to a certain place. The traditional practice of seed selection preserves the environment and sustains biodiversity, while using our resources which are affordable and accessible. These seeds don’t need any modification.

We are seeing new diseases due to the diet arising from everything that is imported, and as a result of underestimating the value of traditional dishes of grains and vegetables.

Though many have gone to chemical agriculture, our movement has identified several traditional practices that we’re sharing with our sisters and brothers. We Are the Solution organizes workshops, forums, and community radio broadcasts to bring our message down to the popular, rural level and inform the grassroots about the advantages of traditional agroecological or peasant agriculture.

In Casamance [a region of Senegal], We Are the Solution has established a platform of 100 grassroots associations. We now have a model farm field and a store for marketing our family farm products from various kinds of production and hand-tool farming. The store is there to help us promote ecologically produced products produced by women. We are also trying to organize a forum on local consumption.

Overall, women are taking leadership roles in the countries in which We Are the Solution is active, promoting agroecology and seed and food sovereignty as the only viable system for the long-term. This way we can have healthy lives and protect the environment.