Our small three person delegation from CODEPINK: Women for Peace (Leslie Harris of Dallas, Texas; Barbara Briggs-Letson of Sebastopol, California; and Ann Wright of Honolulu, Hawaii) travelled to Greece to volunteer in refugee camps. We spent our first day in Athens at the refugee camp on the piers of Piraeus harbor, known as E1 and E1.5 for the piers on which they are located — away from the busiest piers from which the ferry boats take travelers out to the Greek islands. Camp E2, which held 500 people, was closed over the weekend, and the 500 people in that location moved to Camp E1.5. 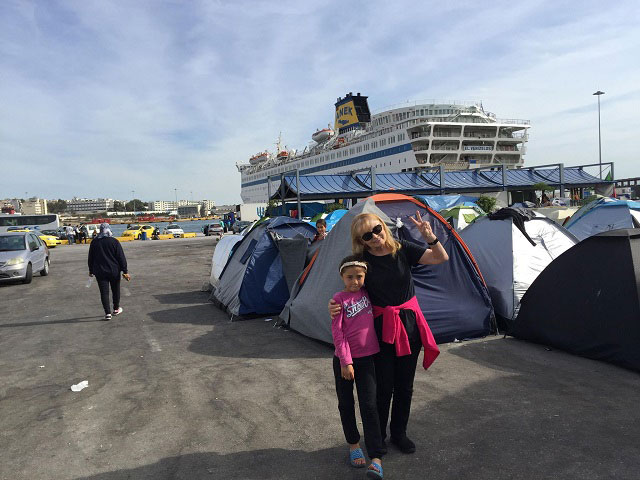 The camp has been on the piers of Piraeus for several months when ferryboats began moving refugees from the islands off the coast of Turkey to Athens. Many of the boats arrived at the piers at night, and the travelers had no place to go, so they just camped out on the piers. Gradually, the Greek authorities designated piers E1 and E2 for refugee camps. But with the tourist season arriving, the authorities want the space for the increased tourist business.

Some of the refugees left the Piraeus piers to check out other refugee facilities, but have returned to the piers as the concrete (rather than dirt floors) fresh ocean breezes and easy access to the city of Athens by public transport are seen as better than being in a formal camp in an isolated location with more stringent entry and exit rules.

We were at Piraeus all day helping in the clothing warehouse and talking to refugees as they wait in lines — for the toilets, showers, food, clothing — lines for anything and everything — and being invited to sit inside the family tents to chat. We met Syrians, Iraqis, Afghans, Iranians and Pakistanis.

The pier camps are informal, not official refugee camps operated by any one group. But the Greek government is helping with some of the logistics, such as toilets and food. There seems to be no camp administrator or central coordinator, but everyone seems to know the daily drill of food, water, toilets. Refugee registration for their future is a process we have not figured out, but many we have spoken with have been in Athens for over two months and do not want to be moved to a formal facility where they will have less freedom and access to the local communities.

The toilets are a mess, long lines for showers with a 10-minute max for moms to shower the kids. Most live in small tents with large families connecting several tents to form a “sitting room” and bedrooms. Kids race around the area with small toys. The Norwegian NGO “A Drop In the Ocean” has a tent providing a space for art, coloring and drawing for kids. A Spanish NGO has hot tea and water available 24 hours a day. The clothing warehouse is stacked with boxes of used clothes that must be sorted into logical piles for distribution. As there are no clothes washing machines, some women attempt to wash clothes in buckets and hang the garments on lines, while others have found that throwing away dirty clothes and getting “new” ones from the warehouse is the most efficient way to stay clean. UNHCR provides blankets that are used as carpets in tents.

We met international volunteers from Spain, the Netherlands, the US, France and many Greek volunteers. The volunteers who have been there the longest pass on the routine to the newcomers. The previous system of a daily orientation for the new volunteers has not been reestablished since camp E2 was closed.

The tent living areas are remarkably clean, considering how long people have been there. The hospitality of the refugees toward those who have come to the camp in solidarity is heartwarming. We were invited into the three-tent home of a family from Iraq. They have five children — four girls and one boy. They had just brought to their tents the lunch provided at 3pm, a lunch of hot stew, bread, cheese and an orange. They had all the family seated for a formal meal, no doubt to remind the children of home. 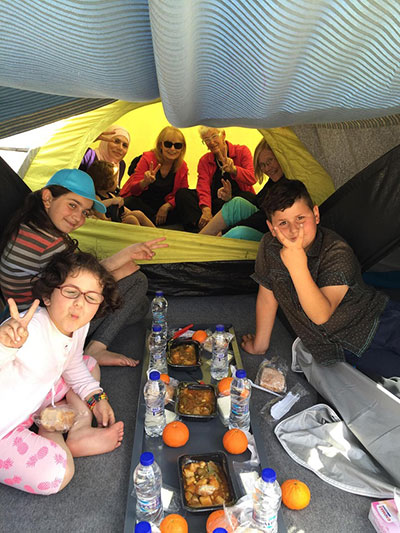 (Courtesy: Ann Wright)In the typical Middle Eastern courtesy to strangers, they asked us to come into the tent and offered to share their meal with us. We sat and talked as they ate. The father, who appeared to be about 40 years old, is a pharmacist, and the mother is a teacher of Arabic. The father said he had to bring his family out of Iraq because if he were killed, as many of his friends have been, how would his wife take care of the family?

In a refugee facility we visited in Munich, Germany, we found the same hospitality. The facility is a building left vacant by the Siemens corporation. Eight-hundred people live in the five-story building. About 21,000 refugees are in various facilities in Munich. A family from Syria with six children came into the hallway to offer us pieces of raw vegetables, and another family from Armenia offered us pieces of candy. The hospitality of the Middle East continues with the families as they travel under extraordinarily difficult conditions to other parts of the world.

In Berlin, we went to a refugee facility at Tempelhof Airport in which the hangers have been turned into accommodations for 4,000. The refugee facilities in Berlin and Munich are operated by private companies, rather than directly by the German government. Each German region has been given quotas for the numbers of refugees they must accommodate, and each region has made its own standards for assistance.

While the United States has closed its borders to person fleeing the chaos caused in great measure by its war on Iraq, the countries of Europe deal with the human crisis as best they can — not perfectly, but certainly with more humanity than the government of the United States.

Donate Now
Share
This article may not be republished without permission from Truthout.
Ann Wright