Although US continues aid restrictions requiring Guatemala to stop using military as law enforcement, that country has intensified its use of military to protect multinational business interests against communities resisting infrastructure projects.

In December, the US Congress passed legislation that reconfigures the conditions of economic aid for development projects in Guatemala and puts further pressure on the Guatemalan government to reduce the presence of military in everyday life.

The requirements are part of the Appropriations Act for the 2015 fiscal year, which sets the budget and terms for the coming fiscal year. In relation to Guatemala, the act does several things. First of all, it maintains the three-decade-long congressional ban on military assistance to Guatemala, which was instated due to human rights violations by the military during the country’s 36-year-long internal armed conflict. Secondly, the bill requires the government of Guatemala to show progress on the repatriation of families affected by the construction of the Chixoy dam during the 1980s.

Lastly, the bill makes funding for Guatemala’s massive expansion of development projects dependent on the government “implementing a credible plan to build a professional, credible police force and end the army’s involvement in internal law enforcement” – as required by the 1996 peace accords – as well as the investigation and prosecution of any army official alleged to have committed “gross violations of human rights” during the countries 36-year-long internal armed conflict.

Guatemala is currently undertaking massive expansion of infrastructure, including the construction of highways, hydroelectric dams and oil pipelines as part of the Central America integration called for in Plan Mesoamerica – the renamed Plan Puebla-Panama – first proposed by former Mexican President Vincent Fox for a integrated infrastructure from Puebla, Mexico, to Panama. The construction of hydroelectric dams in Guatemala is a key part of the plan, which looks to use Guatemala’s vast networks of rivers to produce energy for the region.

Yet the expansion of hydro projects has brought with it conflicts in the indigenous communities. People are evicted from their territories and are affected by the rising waters to make way for the projects.

The administration of president Otto Pérez Molina has remained defiant. Guatemalan daily newspaper reports the president stating, “We will advance without the need for the United States telling us what we should do,” said Pérez Molinain in a press conference. “We have the full sovereignty to make decisions.”

The decades’ long ban has been slowly chipped away over time. Today, the Guatemalan army receives training and support from the United States government to combat drug trafficking and for securing the border with Mexico, but restrictions have remained.

Pérez Molina, a former military officer, had campaigned on the return of full, unrestricted military aid from the United States. The Appropriations Act, of course, hinders the president from fulfilling this promise. 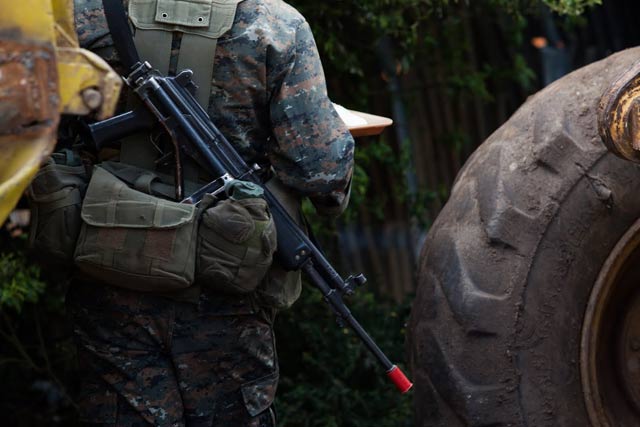 A Guatemalan soldier walks between construction equipment in the community of Pajoques a week after the official end of the state of exception. (Photo: Jeff Abbott)

The Return of the Military

Since 2012, Perez Molina’s administration has overseen the rapid expansion of the Guatemalan military into the internal law enforcement realm. This turn is not surprising: During the internal armed conflict of the 1980s, Pérez Molina was a commander of the Kabiles, an elite Commando unit in the Ixil region responsible for the genocide against the Ixil people in the highlands of Guatemala during the dictatorship of Efrain Rios Montt. In the months after Pérez Molina’s election, soldiers once again patrolled the streets of Guatemala City and tourist towns such as Antigua Guatemala.

Human rights advocates, such as the Washington DC-based Guatemalan Human Rights Commission, have raised concerns about the increased militarization of daily life in Guatemala. They also point to the increased presence of the military in law enforcement as a violation of the peace accords.

The peace accords had separated the national police force from the military and removed the military from domestic law enforcement. Prior to the end of the war, Guatemala did not have a civilian police force that was separate from the military; the 1996 agreements led to the creation of a civilian police force, the National Civilian Police (PNC). But in the 20 years since the peace agreements, the military has increasingly been deployed to the sites of protests, and utilized against communities in resistance to mining, hydroelectric projects and the expansion of African Palm oil into their communities.

From 1960 to 1996, Guatemala was entrenched in an armed conflict between the Guatemalan government and Marxist guerrillas. Over 250,000 people were killed and 45,000 people were disappeared. The indigenous Mayan communities were those most heavily affected.

The rise in military involvement spiked when Pérez Molina came to power. On October 4, 2012, the military was deployed to the indigenous department, Guatemala’s territorial division likened to a state or province, of Totonicapán, where communities were protesting new congressional reforms that were made without the consultation of the indigenous populations, as required by the International Labor Organizations Convention 169 on the rights of indigenous peoples, – and the rising cost of energy. During the protest, the military opened fire on the protesters – killing 8 and injuring more than 40.

The massacre became the first massacre since the signing of the peace agreements and occurred within the first year of Pérez Molina’s administration. The administration responded to the massacre by promising that the military would no longer be deployed to protests, a promise that hasn’t been kept. 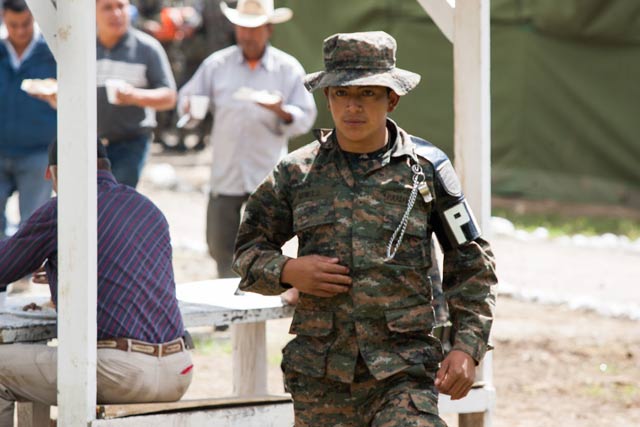 Workers from the construction site of a Cementos Progreso access road eat as a soldier walks to meet with journalists. (Photo: Jeff Abbott)
Suspending the Constitution

As social conflicts created by the expansion of mining, hydroelectric and the expansion of African Palm oil monoculture production increase, so too has the deployment of military to protect the interests of both national and transnational companies, to control communities in resistance and to ensure the rights of national and international businesses to their investments. There have been six “states of exception” or “states of siege” declared by the Guatemalan government since 2009 in seven communities. Likened to martial law, each time the Constitution is suspended in the region, the military is then deployed alongside the police in operations resembling the counter-insurgency tactics used during the internal armed conflict.

Officially, the states of exceptions and sieges are declared to combat criminals, drug trafficking, or to return “peace” to communities. Yet all too often, the military uses the state of exception to imprison leaders from the various resistance movements for alleged past crimes and to intimidate communities in resistance.

“The use of the military is psychological,” Juan Roberto Buzoc Che, a Q’ueqchi’ Maya from Coban Alta Verapaz who works with The Mayan Association for Community Service and Development (ASOMADIC), told Truthout. “The military has historically been used against the indigenous populations; it has been used to violate women; it has been used to assassinate the people. Today, the response is to use all of the force of the military and police against those who are defending their land.”

“It feels as if we are returning to the era of the internal armed conflict,” said one community leader from San Juan Sacatepéquez, after the government declared a state of exception in 12 Kaqchikel communities in the municipality of San Juan Sacatepéquez, an hour from Guatemala City. “The military is once again in our communities. The state is protecting the interests of the businesses and not of the communities in struggle.”

Historically, the Guatemalan oligarchy, made up of 8 economically powerful families, has utilized the military to maintain their stranglehold on the Guatemalan economy. This has been the case since the mid-1800s, when they formed an alliance with the military.

This oligarchic pattern has continued in the years since the end of the war, with the military being deployed to protect the interests of national businesses and transnational corporations.

The situation in San Juan Sacatepéquez is one of the most blatant examples of the military being utilized to ensure business interests continue without interruption.

The 12 indigenous communities have been in resistance to the construction of a cement factory and access road owned by the powerful Novella family near their communities. The communities fear that the factory will lead to the destruction of their land and water.

There have been two state of exceptions declared within the 12 communities in resistance since 2007. September 2014 marks the most recent exception in the community of Pajoques, where 8 community protesters were killed and 20 injured. The state of exception lasted for 40 days and resulted in the imprisonment of critical members of the resistance movement’s leadership, including Barbara Diaz Sunin, who has remained in jail since October 29, 2014.

The reasoning for the deployment of police and military is not lost on community members.

“We are not free,” observed a resident from Santa Fe Ocaña, who asked to remain anonymous. “The workers (from the cement factory) are free; the police and military are protecting them.”

The northwestern department of Huehuetenango has also seen the deployment of soldiers to defend the construction of a hydroelectric project in the north of the department on the border with Mexico. The communities of Huehuetenango have been organizing against mining and hydroelectric projects since 2007, when 28 municipalities held a department-wide consultation to vote against the expansion of projects in their territory.

Despite the opposition by community members, the projects have continued.

In May 2013, a state of siege was declared in the community of Santa Cruz Barillas in Huehuetenango. Two community leaders, Saul Mendez and Rogelio Velasquez, were arrested for their alleged participation in two vigilante incidents in their community. The two have yet to be charged with any crime, but they remain imprisoned.

“The Internal Minister of the Guatemalan government has criminalized the leaders of the movement,” Victor Sanchez, the coordinator of the Departmental Assembly of the Peoples of Huehuetenango (ADH), told Truthout. “They [Mendez and Velasquez] have been incarcerated for more than a year without charge. Despite what the government says, they have been arrested for the defense of their territory.”

All too often in Guatemala, the calling of a “state of exception” means the military is afforded an ongoing presence in the indigenous communities that are resisting megaprojects. And increasingly, indigenous areas that were once demilitarized have been remilitarized.

On October 31, 2014, the Guatemalan government lifted the state of exception in the 12 communities of San Juan Sacatepéquez, yet troops and police remained. In November 2014, I traveled with two journalists to investigate whether soldiers had left the communities. Yet we learned they had not left. Soldiers in Pajoques, where Progreso Cement is currently constructing an access road, were observed eating with workers in the military encampments weeks after the exception was officially lifted.

Today, it is common to see military vehicles and soldiers patrolling in the communities where residents erect anti-mining signs along the Pan American Highway, near the Mexican border.

“There was a struggle to remove every military base in Huehuetenango after the signing of the peace accords,” said Sanchez of the ADH. “But with the invasion of our territories by the transnational companies, there has been a remilitarization of our communities and of our department.

Share
Copyright, Truthout. May not be reprinted without permission.
Jeff Abbott