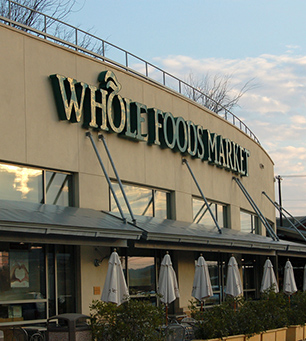 (Photo: That Other Paper / Flickr)The Center for Media and Democracy (CMD) broke the story that the $12.9 billion-a-year natural and organic foods retailer Whole Foods Market had a policy of “don’t ask, don’t tell” when it comes to “conventional” — or non-organic — produce being grown in fields spread with sewage sludge, euphemistically called “biosolids.” Certified organic produce cannot be fertilized with sewage sludge, which is the industrial and hospital waste and human excrement flushed down the drains and later — in some cases — spread on some crops.

Since this story broke, nearly 8,000 activists and PRWatch readers have sent emails to Whole Foods executives asking the company to require its suppliers to disclose this information and to label produce grown in sewage sludge so that customers can make informed decisions.

Mario Ciasulli, a semi-retired engineer and home cook living in North Carolina whom CMD profiled in December 2012, blew the whistle on Whole Foods’ don’t-ask, don’t-tell policy. As soon as he found out that shopping at Whole Foods was no protection against this potential contamination unless he could afford to buy only certified organic produce, he worked extensively to engage Whole Foods on this issue. He has insisted that management address his concerns about potential contamination of non-organic produce, price barriers to organic produce for those who are concerned, and the difficulty of finding out what non-organic produce may have been grown in soil fertilized with sewage sludge without labeling and accountability.

In late 2013, Whole Foods announced a new set of standards for the fresh produce and flowers it sells. Sewage sludge was not mentioned in the announcement, but Ciasulli received word from the company that “[p]rohibiting the use of biosolids will be part of our core requirements. All of our suppliers will be compliant with the core requirements by the time we roll out the program.” A follow-up email to Ciasulli indicated, “This initial release was meant to be high-level. There are far too many nuances to include on a press release.”

This month, Whole Foods Market spokesperson Kate Lowery confirmed to CMD that the new standards will eventually prohibit the use of “biosolids.”

Sewage sludge is created by all of the human waste flushed down the toilet and sinks — which includes all the pharmaceutical residues from all the prescriptions and over-the-counter drugs taken by the men, women, and children in the city using the sewage system — and all the material corporations flush down the drain, which can include industrial materials like solvents and other chemicals, plus medical waste. The water is removed from the sludge, and it is heated to kill certain bacteria, but the heating of the sewage sludge does not remove dissolved metals like silver, flame retardants (which California recently listed as a carcinogen, or cancer-causing agent), and other chemicals that remain in the sewage sludge sprayed on the fields where some “conventional” food crops are grown.

In addition to flame retardants and metals, sewage sludge has been shown to contain toxic substances and other contaminants such as endocrine disruptors, pharmaceutical residues, phthalates, industrial solvents, resistant pathogens, and perfluorinated compounds. Some of these contaminants can “bioaccumulate” in plants grown in sludge-contaminated soil and remain as residue on vegetables in contact with the soil.

These plants are then eaten by children and adults.

Whole Foods Market’s press release states, the chain “will present customers with a three-tier rating system and begin displaying ratings of ‘good,’ ‘better’ and ‘best’ throughout produce and floral departments. With the help of sustainable agriculture experts and with considerable input from suppliers, Whole Foods Market developed a science-based index to measure performance on important sustainable farming topics, including:

Whole Food’s prohibition against produce grown in fields spread with sewage sludge is a major victory for consumers, CMD readers who contacted Whole Foods, and particularly the tenacious Ciasulli, who illustrates the positive change that one determined person can make.

“I am encouraged that Whole Foods has made the commitment to ban biosolids in their produce in 2014, and that the company will require supporting documentation from their suppliers,” Ciasulli told CMD. “We expect Whole Foods to follow through in a real and meaningful way.”

You can thank Whole Foods for listening to Mario and other concerned customers, ask Whole Foods to make this announcement public, and tell the company that you’ll be watching to see that these changes are made HERE.