Don’t look away. Four white neo-Nazis are beating a Black man, crawling on the ground, with their metal poles and a yellow hunk of lumber. The beating continues — there’s blood on the pavement.

The young victim is Deandre Harris, a special education teacher in Charlottesville, Virginia. On GoFundMe, which Harris is using to raise money to pay for his emergency medical care following the beating, he recounts his own experience of being attacked following his participation in the counter-protest against the “Unite the Right” march of white supremacists:

I arrived at Emancipation Park around 11 AM as a counter-protester to voice my opinion on racial tensions and to literally stand up for what I believe in. I was only there for a few minutes before I was hit with water bottles, maced with pepper spray, and had [derogatory] slurs hurled at me. Just forty-five minutes in to the rally our Gov. Terry McAuliffe declared a state of emergency to aid state response to violence. About fifteen minutes or so after that I was brutally attacked by white supremacists in the parking garage right beside the Charlottesville Police Station. I was chased and beat with metal poles. I was knocked unconscious repeatedly. Every time I went to stand up I was knocked back down…. If it was not for my friends that I came with I would have been beaten to a pulp. No law enforcement stepped in to help me. Once I was dragged off to some near by steps I was taken to the designated area for injured protesters & counter-protesters. My injuries were too extensive to be treated at the scene so I was taken to the ER at Martha Jefferson Hospital.

The medical care that Harris received included eight staples in his head and care for a concussion, ulnar fracture, laceration across his right eyebrow, abrasions on his knees and elbows, and a chipped tooth.

During the attack on Harris, Zach D. Roberts, an investigative photojournalist who has been with the Palast investigations team for 11 years, continued to shoot — even as a white militant raised a 9mm pistol to his face.

One photo has gone viral internationally. These others we bring you here because they must be seen. Including, for the first time, the gunman. 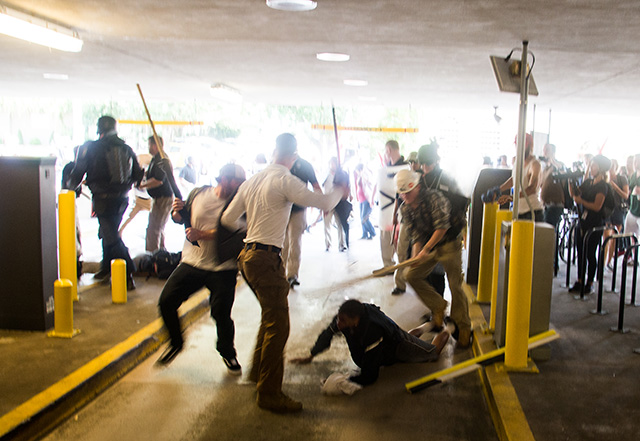 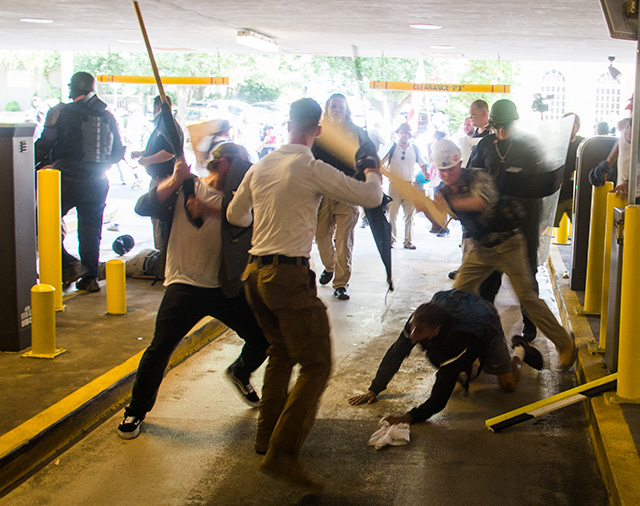 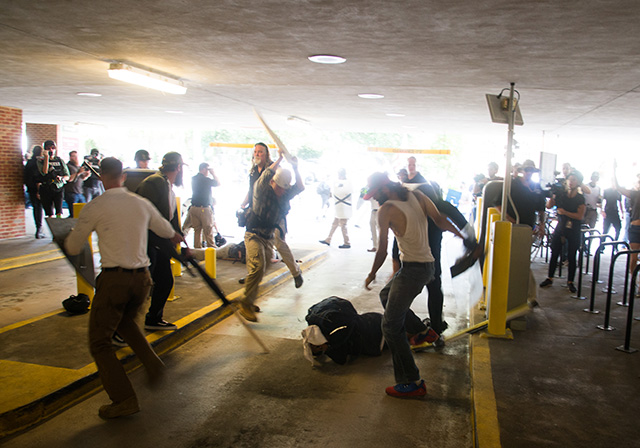 According to President Trump, the violence was perpetrated on “many sides.” The only sides I see are the beaters and the beaten; Harris on the ground with the “alt-right” storm troopers with weapons.

Here is Roberts’ report. First, he saw Harris walking down the street with friends, trading taunts with the white-supremacist demonstrators.

Harris’ jibes were hardly fighting words. “Go home! Leave town!” That’s when fists flew and Harris was slammed by one of the white guys straight into a parking lot barrier so hard the yellow wooden arm broke.

Now Harris fell to the ground, “alone, surrounded by all these white guys — and they started beating him with the poles that almost all the white supremacists were carrying.”

In the photos, you can see one white guy picking up the yellow barrier arm and raising the three-foot hunk of lumber high over his head before he brings it down on Harris — who is being kicked by another white man’s boots, while two others bring down metal rods on the prone man.

And no, that’s not a cop on the left in the photo — that’s a neo-Nazi in full riot gear. (Where were the cops? Good question: this parking garage is next to the Charlottesville Police Station.)

Harris was saved when some courageous young Black men — with no weapons — ran into the underground garage and the white posse scattered.

Except for one. The gunman.

He pulled out what looks to be a 9mm pistol, maybe a Glock semi-automatic, and positioned himself to fire on the rescue squad. But then he heard the click of Roberts’ camera, just three feet away, and realized he was getting photographed.

Simultaneously, Roberts realized he’d left his bullet-proof vest in his car. In this strange stand-off, the camera proved mightier than the bullet: The would-be shooter figured it would be wiser to quickly conceal the weapon and flee.

Harris “ran into the garage’s staircase and collapsed bleeding profusely from the face,” Roberts said. Roberts waited with him and his protectors for half an hour but no ambulance arrived for Harris or the other people who were injured.

In an interview published Sunday on The Root, Harris said that he is in the process of pressing charges and that his mother is working with Roberts to identify the racists who attacked him.

“How do you expect the KKK to come to your city to protest, and them not be violent?” Harris told The Root.

The white supremacist attacks on Harris and others this weekend were not isolated incidents. They are connected to a host of ongoing structural attacks against Black people in Virginia.

Roberts and I have been working these past four years on a story of how Trump’s henchman, one Kris Kobach, now head of Trump’s so-called, “Election Integrity Commission,” conceived of a secretive program to remove hundreds of thousands of Black Americans from the voter rolls.

Virginia removed an astonishing 41,637 voters based on Kobach’s accusation that they could have voted twice. Not one of the accused was arrested — but, you won’t be surprised to hear, the list of the “scrubbed” was filled with African-American names.

And Virginia is removing tens of thousands more with this Jim Crow tactic — despite a nominally Democratic Governor, Terry McAuliffe.

Virginia refused us their “scrub” lists. But Roberts obtained a copy — half a million names in all — much to the state’s dismay. And those lists are every bit as obscenely racist and, in the long run, far more wounding, than the iron rods of the neo-Nazis.

We will be going back to Virginia on September 9 to the capital, Richmond, to fight against this racist disenfranchisement.

Meanwhile, Harris and others who bore the brunt of the white supremacist violence in Charlottesville this weekend are continuing to spread their story and challenging the US public not to look away.

“We will not let this fade & disappear,” Harris wrote on his GoFundMe page. “People are carrying real hate in their hearts for the Black Community and I refuse to just let it happen.”

Greg Palast is the director, and Zach D. Roberts the associate producer, of The Best Democracy Money Can Buy, a film about racial vote suppression and the billionaires behind it.

Share
Copyright, Truthout. May not be reprinted without permission.
Greg Palast