A global battle is being fought over the future of the world’s food. Hear from the women on the front lines in Seed Sovereignty, Food Security: Women in the Vanguard of the Fight Against GMOs and Corporate Agriculture. These seed keepers, food producers, scientists, activists and scholars are committed to building a food system that is better aligned with ecological processes, human health and justice for all. Order this amazing book by donating to Truthout today!

The following is excerpted from Vandana Shiva’s foreword to Seed Sovereignty, Food Security:

Myth 1: GMOs are an “invention” of corporations, and therefore can be patented and owned. Living organisms, including seeds, thus become the “intellectual property” of the GMO industry. Using these property rights, corporations can forcibly prevent farmers from saving and sharing seeds, and can collect royalties on their patented products. A Monsanto representative is on record stating that his company wrote the intellectual property agreement of the World Trade Organization (WTO). He added that they were the “patient, diagnostician, physician”; they defined the problem — farmers save seeds — and offered a solution: seed saving should be made illegal.

The claim to invention is a myth because genetic engineering does not create a plant or an organism; it is merely a tool to transfer genes across species. Living organisms are self-organizing, self-replicating systems. They make themselves. Unlike machines, they cannot be engineered. There are only two ways of introducing genes from unrelated species: one is the use of a gene gun, the other is through plant cancer. Just as a mover of furniture is not the maker or owner of the house to which the furniture is moved, the GMO industry is merely the mover of genes from one organism to another, not the creator or inventor of the organism, including seeds and plants. Through the false claim of “invention” and creation, the GMO industry is appropriating millions of years of nature ‘s evolution, and thousands of years of farmers’ breeding.

Myth 2: Genetic engineering is more accurate and precise than conventional breeding. All breeding has been based on breeding within the same species: rice is bred with rice, wheat with wheat, corn with corn.

The tools of genetic engineering allow the introduction of genes from unrelated species into a plant, and include genes from bacteria, scorpions, fish, and cows. The introduction of genes from unrelated species is a blind technology, neither accurate nor precise. When genes are introduced into the cells of a plant using a gene gun, it is not known if the cell has absorbed the gene or not. That is why every GMO also uses an antibiotic-resistance marker gene, to separate cells that have absorbed the gene from those that have not. This means that every GMO in food has antibiotic-resistance genes that can mix with bacteria in the human gut and aggravate the crisis of antibiotic resistance we are currently facing.

Further, since the introduced gene does not belong to the organism, genes from virulent viruses are added as “promoters” to express the trait for which genes have been introduced. These additional transformations are evidence of the unreliability and inaccuracy of the gene transfer technology. Moreover, nothing is known about what these genes do when they enter our body as food. In the case of herbicide-tolerant crops like Roundup Ready soy and corn, the combination that needs to be considered for its impact on the environment and on health is both Roundup (glyphosate) and the new genes in the food crop. 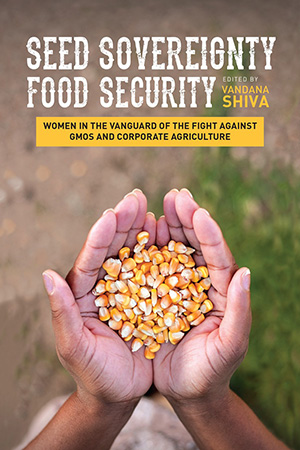 (Image: North Atlantic Books) Myth 3: GMOs are just like naturally occurring organisms, and are therefore safe. Myth 3 is inconsistent with myth 1. To establish ownership, the GMO industry claims novelty. To avoid responsibility for adverse impact, it claims naturalness. I have called this “ontological schizophrenia.” GMOs have an impact on the environment, on our health, and on farmers’ socioeconomic status; that is why we have an international UN Biosafety Protocol.

I was appointed a member of the expert group that worked on the framework of the protocol to implement Article 19.3 of the Convention on Biological Diversity. The unscientific principle of “substantial equivalence” has been institutionalized in order to avoid research on biosafety. Substantial equivalence assumes that the GMO is substantially equivalent to the parent organism. This leads to a “don’t look, don’t see, don’t find” policy, and not having looked for impacts, GMOs are declared “safe.” Ignorance of impacts, however, is not proof of safety.

There is as yet no proof of safety.

Myth 4: GMOs are based on cutting-edge science; GMO critics are “antiscience.” Genetic engineering is based on an obsolete paradigm of genetic determinism, a linear and deterministic flow of information from genes, which are called “master molecules,” to proteins. Francis Crick called this the “central dogma” of molecular biology. Genetic determinism assumes that genes are atoms of biological determinism, with one gene carrying one trait, and determining the traits in an organism. But these are assumptions that come from the idea of control and domination; this is patriarchal ideology, not science.

Cutting-edge science teaches us that these assumptions are false. Genes are fluid, not fixed.

Each gene contributes to multiple traits; each trait is an expression of many genes acting in concert. As Richard Lewontin states in the doctrine of DNA:

DNA is a dead molecule, among the most non-reactive chemically inert molecules in the world. It has no power to reproduce itself. When we refer to genes as self-replicating, we endow them with a mysterious, autonomous power that seems to place them above the more ordinary materials of the body. Yet if anything in the world can be said to be self-replicating, it is not the gene, but the entire organism as a complex system.

Living organisms, including seed, are self-organized, complex systems; moreover, genes are influenced by the environment, as the new discipline of epigenetics shows.

On the basis of the latest and independent science, leading scientists across the world have contributed to the new science of biosafety; and corporate ideology, parading as science, has launched a brutal, violent, and unscientific attack on every scientist speaking the truth about GMOs on the basis of detailed scientific research on the impact of GMOs. This includes Dr. Arpad Pusztai, Dr. Ignacio Chapela, Dr. Eric Seralini, and me.

The GMO debate is science versus ideology, with GMOs being promoted through blind ideology — the ideology of mechanistic, reductionist, deterministic assumptions about the world, combining with the ideology of unbridled corporate greed.

Myth 5: GMOs increase yields and are the answer to world hunger. Genetic engineering as a tool for the transfer of genes is not a breeding technology; it does not contribute to breeding high yielding crops. Yields come from conventional breeding; all that genetic engineering does is add a Bt toxin gene or a gene for herbicide tolerance, and antibiotic-resistance marker and virus genes. These do not increase production of food, but they do contribute to the production of risks from toxins and antibiotic resistance.

Even the argument that GMOs increase yield indirectly by controlling weeds and pests is incorrect because rather than controlling pests and weeds, Bt GMOs have contributed to the emergence of new pests and superpests resistant to the Bt toxin, and herbicide-resistant crops have led to superweeds resistant to Roundup. Hence, new GMOs have now been developed that are resistant to 2,4-D, an ingredient of Agent Orange.

When one notes the fact that when Roundup is sprayed, food crops are destroyed, GMO cultivation in fact leads to a decline in food and nutrition production at the systems level. As Navdanya studies show, biodiverse organic systems can increase nutrition per acre, and have the potential to feed two Indias.

Myth 6: GMOs reduce chemical use and are therefore environmentally beneficial. Two applications of genetic engineering account for most commercial planting, Bt crops, and HT crops. Herbicide-tolerant crops account for 63 percent of the cultivation of GM crops. Bt crops have led to an increase in pesticide use because of new pests and pest resistance in the bollworm. As the Directorate of Plant Protection shows, pesticide use has increased with the increase of Bt cotton cultivation. Herbicide-tolerant crops are designed to make crops resistant to herbicide spraying.

When corporations write the rules of “free trade,” it is corporate dictatorship, not free trade.

When enforcing patents and intellectual property rights (IPR) laws written by themselves, corporations prevent farmers from saving seed; it is not “free choice,” it is seed slavery.

In India, Monsanto has locked local seed companies into licensing agreements to only sell Bt cotton. The labels have different names, but they are all “Bollgard,” Monsanto’s Bt cotton. This is illusionary “free choice”: the reality is seed monopoly.

When corporations spend millions to prevent the labeling of GMOs and deny citizens the right to know and the right to choose, free choice is being stifled.

Copyright (2016) of Vandana Shiva. Not to be reprinted without permission of the publisher, North Atlantic Books.