The US Border Patrol has recently released its new strategic plan, the 2012-2016 Border Patrol Strategic Plan, which the agency says is “risk-based.”

What is the greatest risk to the border or cross-border threat to the “homeland”? Measured in numbers, that would be marijuana – the weed that citizens in Colorado and Washington on November 6 voted to legalize for recreational use and which is considered a legal medication in 17 states.

Close observers of anti-drug war and anti-drug prohibition campaigns variously describe the new measures to legalize marijuana use as a “tipping point” in the long struggle to overturn drug prohibition. The Washington Office of Latin America, an American non-governmental organization promoting human rights, observed that legalization and decriminalization are “voter-friendly” issues, obligating politicians to consider the stalled federal legislative campaign against drug wars and drug prohibition in a “new light.”

Even as support for drug prohibition has steadily eroded both in the United States and throughout Latin America, on the border, the war against illegal drugs has hardened. Enforcing drug control laws appears to have become the principal focus of the border security buildup. Drug seizures along the US-Mexico border have soared, as the drug wars rage south of the border and as the federal government has channeled billions in new federal dollars for drug law enforcement by Border Patrol, US immigration officers, the FBI and local police.

However, as drug seizures, mostly marijuana, have reached record levels, unauthorized immigration flows have steadily declined – dropping to the lowest numbers in four decades. The Border Patrol states that it is protecting the homeland against “dangerous goods and dangerous people.” But its own statistics show that it is largely focused on drug-war operations, especially against cross-border flows of marijuana.

For the Border Patrol, whose mandate is to “secure the border” between the ports-of-entry, this means, for the most part, arresting marijuana backpackers, who cross the border with 50 to 60 pounds of marijuana on their backs and without immigration documents. At highway checkpoints, once almost exclusively focused on immigration enforcement, drug control is currently the primary focus. At the spreading array of borderland traffic checkpoints – ranging from large permanent installations to temporary structures to roving roadblocks – Border Patrol agents still ask the citizenship of drivers. 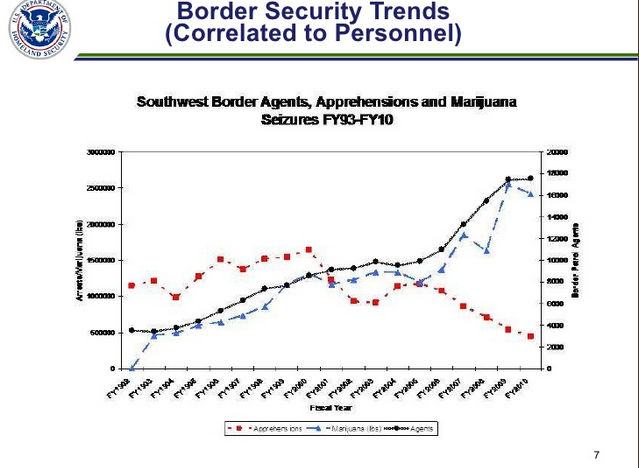 But canine teams now do most of the work, sniffing out personal stashes and paraphernalia, as well as larger hauls of illegal drugs headed to major urban markets. The most effective Border Patrol checkpoints are not the ones stopping northbound traffic from Mexico, but rather the checkpoints on the east-west highways that catch thousands of unsuspecting citizen drivers. Many may have medical marijuana cards or just a joint or two of marijuana. But marijuana remains a Schedule 1 controlled substance – along with heroin and methamphetamines, under federal law. Thus, German shepherds have become the main instruments of border security as now practiced by the Border Patrol.

Measured by numbers, the outstanding result of increased border security operations over the past decade – doubling of the Border Patrol force, drone surveillance, and the virtual and real border fences – is the unprecedented amount of marijuana seized and marijuana carriers apprehended.

When measured by the number of drug seizures of cocaine, methamphetamines, heroin, marijuana, and ecstasy, the Border Patrol reported 16,355 seizures along the southwestern border in fiscal year 2011 – 15,252 being marijuana seizures. Overall, marijuana accounts for more than 93 percent of drug seizures along the US-Mexico border. Along many stretches of the southwestern border, particularly rural areas, agents patrolling the border only rarely, if ever, encounter anything but marijuana. Illegal drugs other than marijuana are most often discovered near urban areas or while stopping traffic already well within the country, since the higher-priced and more easily concealed drugs aren’t crossed in areas patrolled by the Border Patrol but through the legal ports-of-entry.

Measured in pounds, marijuana is indisputably the drug-war heavy. Last year, the Border Patrol seized a record quantity of marijuana – 2,518,211 pounds. That compares with 2 pounds of ecstasy, 385 pounds of heroin, 8,763 pounds of cocaine, and 1,838 pounds of meth.

The Border Patrol insists that dramatic declines in unauthorized immigration flows are directly related to its risk-based border security operations. More border security deters prospective unauthorized immigration, says the Border Patrol. But for reasons they don’t explain, this deterrence strategy hasn’t effectively deterred illegal drug flows. While the Border Patrol is capturing substantially more marijuana and other illegal drugs produced in Mexico, still more is flowing into the country to meet expanding markets, especially for marijuana. Increasingly, Americans are consuming marijuana – judged illegal and harmful by the federal government – legally, medically, and without penalty within the homeland.

The 2012-2016 Border Patrol Strategy, the new plan to secure the border, commits the agency to increased risk assessments and intelligence gathering. Yet most of the Border Patrol’s threat assessments and intelligence operations have little or nothing to do with either public safety or homeland security. Instead, they are largely focused on the purported threat of marijuana.

The Border Patrol insists that the billions of dollars the agency spends each year protects the homeland against “dangerous goods.” As acceptance for marijuana and other illegal drugs grows in the United States, as made clear in the recent elections, the Border Patrol is on the wrong side a new political and ethical line in America. Border Patrol agents find themselves vainly attempting to secure the border against a relatively harmless good that a large number of Americans want.

What’s marijuana have to do with national security, homeland security, or border security? That’s a pressing strategic question for the Border Patrol, and also for the second Obama administration.

Share
Copyright, Truthout. May not be reprinted without permission of the author.
Tom Barry