The anti-heroes of rock and rap, Prophets of Rage, are set to galvanize Brooklyn, New York, this Saturday, August 27. Comprised of members of Rage Against the Machine, Public Enemy and Cypress Hill, their nationwide “Make America Rage Again” tour touches directly on the complex topic of politics and how it is used to push people around.

Some writers have derided this super group as simplistic in their message, but the musicians are clearly serious: They were banned at the last minute by correction officers from playing inside the California Rehabilitation Center for 800 prisoners. Meanwhile, they’ve designated a portion of their un-cost-prohibitive ticket sales to provide rehabilitation for the homeless. As of Wednesday morning, August 24, hundreds of tickets were still available, according to the Barclays Center.

And speaking of politics, the band recently played live for free in Cleveland, Ohio, to call out the Republican National Convention, and yet their whole anti-politics shtick isn’t just anti-GOP. Cypress Hill’s B-Real has called for voters to write in Prophets of Rage for president come November.

This weekend, you’ll have the chance to hear Tom Morello playing the beyond-major-chord-progression riffs to “Bulls on Parade,” “I’m Housin’,” “Guerrilla Radio” and the new listenable hit single “The Party’s Over.”

Like most rock shows that scoff at the status quo, it’ll be a good place to schluff off the BS. And looking ahead at the Barclays Center fall lineup, any other show after this one will be downhill. Prophets of Rage will be like a dream home purchase in a credit bubble. 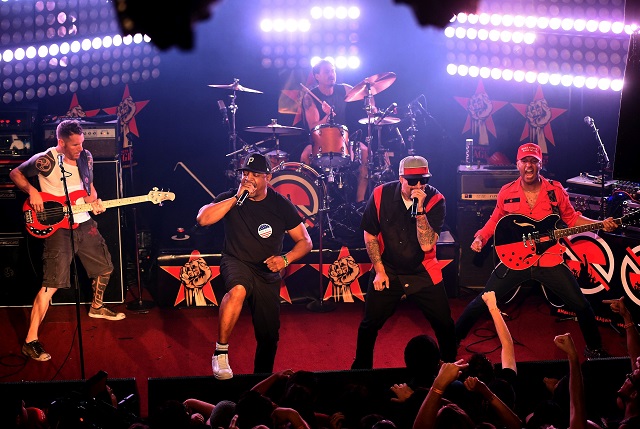 Share
Copyright, Truthout. May not be reprinted without permission.
José Negroni

José Negroni is the former communications director for Build Up NYC, a coalition of unions. He is a graduate of Sarah Lawrence College and Columbia University.