With all the craziness at home, I didn’t have time to comment on the European Central Bank’s decision earlier this month to raise rates despite continuing very high unemployment.

The first thing to say is that overall euro-zone numbers look very much like numbers in the United States: a blip in headline inflation due to commodity prices, but low core inflation, and no sign of a wage-price spiral.

So the same arguments for continuing easy money at the Federal Reserve apply at the E.C.B. And the E.C.B. is not making sense: it’s raising rates even as its officials acknowledge that the rise in headline inflation is likely to be temporary.

But there’s another, euro-specific aspect to this story. During the pre-2008 eurobubble years, there were huge capital flows to peripheral economies, leading to a sharp rise in their costs relative to Germany’s. Now the bubble has burst, and one way or another those relative costs need to be brought back in line. But should that take place via German inflation or Spanish deflation? From a pan-European view, the answer is surely some of both — and given that deflation is always and everywhere very costly, the bulk of the adjustment should in fact take the form of rising wages in Germany rather than falling wages in Spain.

But what the E.C.B. is in effect signaling is that no inflation in Germany will be tolerated, placing all of the burden of adjustment on deflation in the periphery. From the beginning, euroskeptics worried about one-size-fits-all monetary policy; but what we’re getting is worse: one-size-fits-one, Germany first and only. That’s a recipe for a prolonged, painful slump in the periphery; large defaults, almost surely; a great deal of bitterness; and a significantly increased probability of a euro crackup. Aside from that, it’s prudent, reasonable policy.

The Road to the Euro Crisis

Some readers are confused when I talk about how the coming of the euro led to low interest rates in the European periphery. 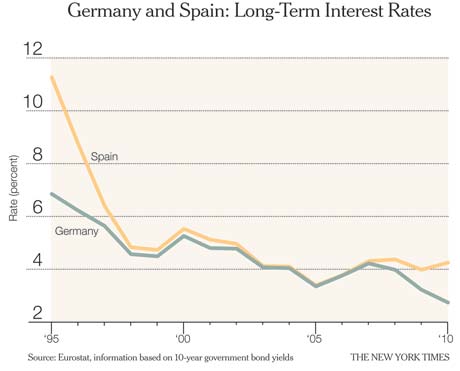 It’s actually very clear in the data, as the graphic shows. As the euro became a done deal, countries that had previously had to pay a large interest premium found themselves able to borrow on the same terms as Germany; this translated into a big fall in their cost of capital.

The result was bubbles, inflation, and in the aftermath of the bubbles and inflation, what you see now.