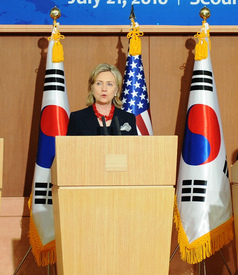 Seoul – US Secretary of State Hillary Clinton on Friday sought unbending support for sanctions against North Korea for its alleged torpedoing of a South Korean warship in March. Her remarks come days ahead of joint South Korea-US war games that have drawn threats of retaliation from Pyongyang.

“One measure of the strength of a community of nations is how it responds to threats to its members, neighbors, and region,” Clinton told reporters. “Here in Asia, an isolated and belligerent North Korea has embarked on a campaign of provocative, dangerous behavior, including its attack on the Republic of Korea…To encourage North Korea to take the steps it must, we urge our…partners and allies to continue to implement UN sanctions, fully and transparently.”

On Wednesday in Seoul, Mrs. Clinton said the US was preparing to enact a series of additional financial sanctions against North Korea aimed at choking off its weapons trade and increasing the economic pressure on Pyongyang’s political elite. US officials said the measures will include travel bans, asset freezes and the targeting of companies and individuals alleged to be involved in developing and selling weapons of mass destruction.

North Korea had sought to avoid discussing the sinking of the Cheonan at the ASEAN forum, according to a report by South Korea’s Yonhap news agency:

“This is a matter between the North and the South and should be resolved through inter-Korean dialogue,” [a North Korean] source said. “It’s not appropriate to mention that in this international setting,” the source said.

But a draft of the ARF’s joint statement, seen by Yonhap, indicates Clinton’s speech may have had some effect. The forum is expected to express “deep concerns” over the deadly sinking of the Cheonan and support for a related UN statement – which fell short of blaming the North directly.

During Clinton’s visit to Seoul earlier this week, she and US Defense Secretary Robert Gates finalized the details of the joint drills in a “two-plus-two” meeting with South Korean foreign affairs and defense officials. The training will kick off on Sunday and focus on anti-submarine tactics, as well as on giving North Korea a show a force.

North Korea denies responsibility for the Cheonan’s sinking and denounced the exercises earlier this the week, reports The Christian Science Monitor. But today Pyongyang diplomat Ri Tong-il told reporters in Hanoi that there would be a “physical response to the threat imposed by the United States militarily,” according to Xinhua.

Clinton seemed to brush off the threats as hyperbole:

“It is distressing when North Korea continues its threats and causes so much anxiety among its neighbors and the larger region,” she told reporters. “But we will demonstrate once again with our military exercises … that the United States stands in firm support of the defense of South Korea and we will continue to do so.”

Such threats are commonplace, the Wall Street Journal also notes, but they do indicate the level of tension in the region.

China has given no support to accusations that North Korea has also openly expressed opposition to the war games, but neither South Korea or the US have backed down.

An editorial in South Korea’s Chosun Ilbo warns that if China chooses to strengthen its alliance with Pyongyang as a reaction to the drills, the Korean Pensinsula “could once again become the scene of a Cold War.”

“Seoul and Washington must find a solution to that problem,” the paper says.