The Trump administration’s “drone policy,” though early to characterize, is shaping up to be even more aggressive than the Obama administration’s. There has been a significant increase in the number of drone attacks since Trump assumed office. In March 2017 parts of Yemen and Somalia — where the United States is not formally at war — were changed to “areas of active hostilities,” making it easier for the US to launch drone attacks.

Many more civilians are dying than the US government publicly admits.

Through the Obama years and continuing with Trump, opponents of drone warfare have tended to highlight civilian casualties from drone attacks. They rightly argue that many more civilians are dying than the US government publicly admits. Another frequently raised concern is the secrecy of (and dubious legal basis for) the CIA’s drone operations in “non-traditional battlefields” like Pakistan, Yemen, Somalia and Libya. These are all pressing issues and will continue to serve an important role in ethical debates about drone warfare.

What is often neglected in these debates, however, is the use of drones by the US Air Force (not the CIA) in countries that the US is known to be active in: Afghanistan, Iraq and Syria. The Trump administration is deepening its military engagement in these conflicts, and has committed to the deployment of nearly 4,000 soldiers to Afghanistan. This troop surge is going ahead even though a corresponding long-term strategy for the war in Afghanistan is not yet decided. It is important to consider how the use of drones is affecting civilians’ lives and livelihoods in these countries, how those effects will manifest in the future, and the long-term implications of this for diplomacy and security.

“Bongak” and “Bnngina” are the terms used to describe military drones in different regions of Afghanistan: Dari/Pashto onomatopoeias because of the “bnng” sound they make as they hover above. Afghanistan is the world’s most drone-bombed country, yet is commonly forgotten about in drone criticism and monitoring efforts. Drone surveillance and attacks began in Afghanistan in 2001, yet the civilian casualty toll has only been monitored since 2015. The Bureau of Investigative Journalism, the organization conducting this monitoring, reports that accurate figures are almost impossible to obtain because of the insecurity and inaccessibility of attack locations.

Quantitative data is not the best tool to convey how it feels to hear drones, to think about being spied on in your home or to fear a possible attack.

This means there are limitations to relying on civilian casualty figures when discussing the ethics of drone warfare in Afghanistan. More importantly, and this applies to all areas attacked and surveilled by drones, the effects of drones are much more profound and wide-ranging than a focus on casualty numbers invites the public to consider. Casualty figures can even work to dehumanize victims: Quantitative data is not the best tool to convey how it feels to hear drones, to think about being spied on in your home or to fear a possible attack. Despite the obvious challenges, it is important that researchers and journalists attempt to uncover and communicate the emotional and psycho-social harms of drone warfare. The recent documentary National Bird, which interviews Afghan drone victims, is one such example of the brave journalism needed.

As a Ph.D. researcher based in Australia, going to Afghanistan to speak with drone victims seemed impossible for myriad reasons, including the rigorous ethics approval and “high-risk travel destination” application my university required. Persistence paid off, however, and I had the (difficult, heart-wrenching, yet moving) experience of meeting with more than 20 Afghans who live in provinces surveilled by drones, were injured in drone attacks or have lost loved ones to drone attacks. It is their stories that I share here, though I have changed their names to protect their privacy.

Despite researching drone warfare for almost four years, it was still surprising to learn about the extent of the effect on Afghan people’s lives and livelihoods. From the psychological distress of living under drone surveillance, to the economic impact of a disability, to the sadness and stress experienced by the family of an injured person, the Bongak/Bnngina has damaged so many aspects of Afghan lives.

Saifullah, a 39-year-old, was injured in a co-joint helicopter and drone attack on February 21, 2010. The attack — reported in the media as “Uruzgan helicopter attack,” though victims say they also saw the drone launch missiles — took place in Kijran District, Daikundi Province (not Uruzgan). According to these civilians, Daikundi was (and still is) a safe, government-controlled province of Afghanistan. The attack killed 21 civilians and injured 14. Saifullah’s younger brother, a 23-year-old, was killed from metal shrapnel piercing his head. Saifullah needed a below-knee amputation on his left leg and now lives with a prosthetic. The “Uruzgan Attack” is unique for a US air attack in Afghanistan because it received Western media attention (many don’t), and the transcript of the drone crew was successfully obtained by the LA Times through a Freedom of Information Act request. It is the only publicly available drone transcript. Media reporting of the event reveals the civilian casualty count. Saifullah’s testimony is much more horrifying:

I heard everybody shouting and crying…. I saw pieces of bodies, even pieces like the size of this cup [points]. I lost my brother. My leg was broken and it was very painful. It is very difficult to see that situation with your own eyes, even for me to say it now. I hope that God does not show that kind of scene to anyone.

Seven years after that dreadful day, Saifullah is still feeling the impact. He has nightmares that wake him in a sweat, he discontinued his university education because his memory and concentration have since weakened, and he sometimes avoids seeing his nephew because it is too upsetting to be reminded of his dead brother. 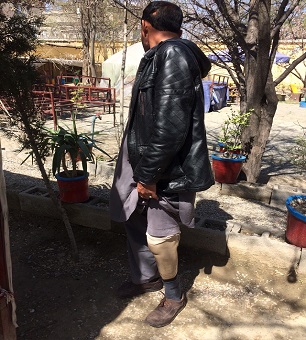 Saifullah, a drone attack victim, lost his leg and the trauma to his head stopped him from concentrating at university. (Photo: Alex Edney-Browne)Thankfully drones rarely fly over Daikundi province, so Saifullah only sees and/or hears them once or twice a year when he travels to other provinces. This is a relief, as he finds the sound “very disturbing,” and fears there will be “another attack on me or some other innocent civilians.”

Meanwhile Abdul Qodus, a 45-year-old from Wardak Province, cannot escape being transported back to the day of the attack that killed his brother. The Bnngina (the name given to drones in Wardak) flies over regularly. “All day and all night it is there,” he laments. “It is nonstop in our village.” This did not seem to be an exaggeration: Abdul had even heard a drone the evening prior to our meeting. “All night I did not sleep more than two hours,” he told me. Abdul’s brother, a farmer, was killed in 2014. He was working alone — taking goats up to the mountain — when he was hit by a drone missile.

“I heard the drone attack and I ran to the mountain. The first thing I saw was the pieces of my brother’s body.”

“I heard the drone attack and I got out of the house, because I knew my brother had taken goats to the mountain and I thought maybe he has been attacked, and I ran to the mountain,” he added. “The first thing I saw was the pieces of my brother’s body.”

Abdul and his family’s lives have changed drastically since the death of his brother. They are now scared of taking their animals to the mountain. “This affects our financial situation. Because we don’t have much land, we need to use the grass at the mountain. Our lives are connected to our animals.”

“We are a mountain village,” he told me. “We go to the mountain to collect wood for fuel, for fires. We need it for our cooking and to make bread. We collect mushrooms and mountain leeks. We get water from the mountain, too, because there is a spring there. We use it to irrigate our farms.”

Villagers are worried that the drones’ surveillance cameras will mistake their innocent behavior for something nefarious.

Many other rural Afghans echoed that the ill effects of drones were felt not just at the individual and familial level, but also by the wider community. Villagers are worried that the drones’ surveillance cameras will mistake their innocent behavior for something nefarious. “When there is a jirga [local meeting] in the village and a drone goes around, we are afraid because we think the meeting will be attacked,” Shanaky Gul, a 25-year-old from Wardak Province, said. Congregations of Afghan civilians have been targeted in the past. A study by Stanford Law School/NYU Legal Clinic, “Living Under Drones,” likewise found that civilians in Waziristan, Pakistan, had stopped participating in communal and social activities because they feared gathering in groups.

It is hard to fathom the long-term effects of drone-induced fear on the psycho-social health of Afghan people and their communities. It is clear, however, that the task of diplomacy and improving security is made more difficult as a result. An overwhelming majority of the Afghan drone victims interviewed voiced unfavorable views about the United States and its allies. How will Afghanistan’s next generation of community leaders and politicians, who have grown up living under the buzz of drones, feel towards the nations responsible for operating them? A troop surge will not improve this diplomatic impasse. Ahmad, a 21-year-old elementary school teacher from Wardak Province, put it this way: “We don’t want to have relations with the militaries of foreign countries. We don’t want it and we don’t like them. The ordinary people like you — we like them and we want to have connections with them.”

Meanwhile, President Trump has repeatedly declared that he will “destroy radical Islamic terrorism,” but has consistently shown that he does not understand the conditions in which terrorism thrives, overlooking the fact that the Taliban has capitalized on anger caused by drones in its propaganda material and the madrassas (schools) it funds in Eastern Afghanistan.

“We cannot care as well for our farms as before,” Abdul told me. “When we go, we go with fear, we go quickly.”

The psycho-social toll of drone warfare and its knock-on effects for cross-cultural relations and security are missed by most drone warfare criticism. As I witnessed in Afghanistan, the wide-ranging and long-term negative impact of drone warfare go far beyond the civilian casualty statistics most often cited, affecting the lives of all who live in the areas patrolled by drones.

“We cannot care as well for our farms as before,” Abdul told me. “When we go, we go with fear, we go quickly.”

Share
Copyright, Truthout. May not be reprinted without permission.
Alex Edney-Browne

Alex Edney-Browne is a Ph.D. researcher in international relations at the University of Melbourne, Australia. Her thesis investigates people’s lived experiences of drone warfare, both Afghan civilians and US Air Force drone personnel. Follow her on Twitter: @AlexEdneyBrowne.