In the past few weeks students across the country have been demanding that their schools stop profiting from oil, coal and gas companies. As student organizers in Massachusetts, Rhode Island and Connecticut, we believe that we can stigmatize the fossil fuel industry by mobilizing students around issues of climate change. But making changes on campus is not enough; we know that we need to participate in local fights against fossil fuel companies to strengthen our largely symbolic campaigns. The fight in our own backyard is Spectra Energy’s project to expand its “Algonquin” pipeline, which carries fracked gas from Appalachia to Boston. Spectra is constructing about 35 new miles of piping and expanding the existing pipeline to be more than twice its current width within just a few hundred feet of a nuclear power plant.

The fight against Spectra may seem like a new climate fight, but it represents only the most recent version of climate colonialism and environmental racism. Spectra’s “Algonquin” pipeline follows in the legacy of violence against indigenous peoples in New England and contributes to climate devastation occurring throughout the world.

Spectra’s decision to use a derivation of Algonquian, a major language grouping in New England, is initially quite confusing. However, when we start to identify multiple instances of businesses using indigenous words for commercial products, we can see that there is a definitive pattern. Companies have seen that stealing tribes’ names and words is often profitable, and corporate appropriation of indigeneity plays a large role in erasing our understanding of the indigenous people who are alive today.

When asked about Spectra using an indigenous word for their pipeline, Mahtowin Muhro for United American Indians of New England responded by saying, “Do they think it is somehow honoring indigenous people to call it that? We cannot imagine that anyone at [Spectra] knows anything about indigenous lives or nations or values.”

The “Algonquin” pipeline successfully reminds us of the caricature of the “natural and docile Indian,” and distracts from the fact that expanding this methane gas pipeline close to a nuclear power plant could create an explosion estimated near the size of Fukushima. It also distracts from the fact that methane gas is 25 times as potent as carbon dioxide in disrupting the global temperature. This disruption is what causes drought, storms, and sea-level rise across the world and heavily affects the Global South in a continuation of colonial violence.

To understand the patterns of global climate destruction, we looked to Naomi Klein’s discussion of Black Lives Matter and climate policy. During the period of national unrest last year, she wisely stated, “If we refuse to speak frankly about the intersection of race and climate change, we can be sure that racism will continue to inform how the governments of industrialized countries respond to this existential crisis.” We know that the United Nation’s failure to create meaningful climate policy has solidified the fact that white and wealthy people’s lives are treated as more valuable than others. People in Southeast Asia are watching their homelands slowly go underwater, as people in other parts of the Global South are suffering from oil spills, drought, extreme storms and various forms of climate destruction. In the United States, we know that wealthier and predominantly white communities are less affected by hazards related to fossil fuel extraction and pollution. The 2010 BP oil spill devastated communities along the Gulf Coast, and coal mining continues to endanger the lives of people in Appalachia.

To make sense of the immense amount of climate destruction, we began to think of climate change in the context of global colonialism, which has historically decided whose lives matter and whose lives do not. This colonial mindset is especially relevant in New England where indigenous peoples have faced scalping and murder, in addition to disease and land theft at the hands of settler societies. 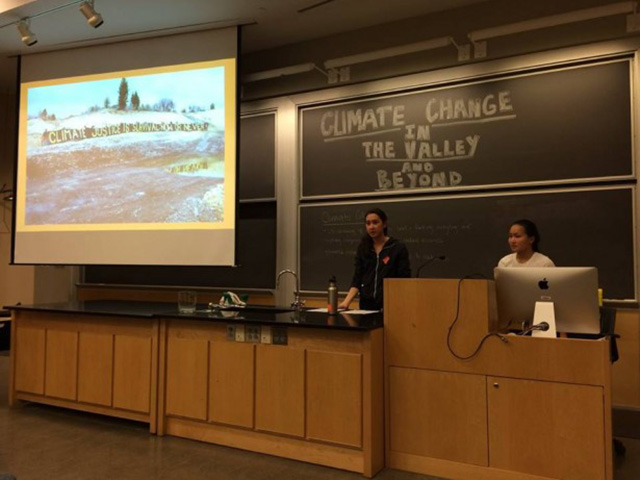 To combat the climate and colonial violence of Spectra’s “Algonquin” pipeline, many of our student groups have been hosting teach-ins to learn more about all of these histories. We have been routinely confronted with the fact that our schools and communities are built upon violence against indigenous peoples, and — with this knowledge — feel it is imperative that we act against the forces of colonialism within climate change. We are taking joint action as a network against Spectra this Saturday, April 30, in West Roxbury and will continue to fight as it moves toward its November 2016 projected finish of the Algonquin Incremental Market gas pipeline expansion.

We cannot remain silent, on or off campus. Complicity allows for climate destruction and upholds the legacy of colonial violence in the Northeast and abroad. We must address our colleges’ and universities’ complicity in this destruction by divesting from fossil fuels, as well as by taking direct action to stop the construction of such projects.

Abby Cunniff is a Ph.D. student in environmental studies at the University of California, Santa Cruz.