In a journey across expendable communities and people – the collateral damage created by an elite oligarchical and political class – Chris Hedges, along with illustrator Joe Sacco, trenchantly and compellingly write of an America in which democracy has become a façade, not a functional tool of change. Receive the recently released book, “Days of Destruction Days of Revolt” [Hardcover], from Truthout by donating, here. Read an excerpt, below.

In a room across the street from Sacred Heart Catholic Church, where meals are provided for the homeless on Saturdays, a group of African American women bow their heads over a table and hold hands. They are led by Lallois Davis, sixty-seven, known as Lolly, a heavyset woman who radiates an indomitable spirit.

“The poor have to help the poor,” Davis says, “because the ones who make the money are helping the people with money.”

Davis raised four children, and then when a neighbor died and left behind her two small grandsons, Davis took them in and raised them as well. She wears a large cross around her neck. Most in the neighborhood call her “Aunt Lallois.”

“My heart is heavy,” says a sixty-nine-year-old woman named Brenda Hayes, her head bowed and her eyes shut. “There is so much heaviness. It is wounding me. How can I not worry?”

“I know you didn’t carry us this far to drop us now,” Hayes says. “I know there is no burden so heavy that we can’t carry it with your help. I thank you, Lord, for friends who have carried me through the roughest times.”

“Yes, Jesus, nothing is impossible with you, Jesus,” the women say in unison.

“Bodies,” Hayes says to me after the prayer. “Bodies out back. Bodies upstairs. People stabbed. I don’t go out at night. The last one was twenty feet away from me on my floor. There was one kid, he lived in the back of the projects, eighteen years old. They buried him two months ago. Gunshot. There were four kids I knew murdered, one in the parking lot who was killed last year. He was twelve or thirteen. He was sleeping, some say he was living, in a car.

“There are parents who are addicts who send their children out to sell drugs,” Hayes says. “I know a mother who is a prostitute. Her oldest daughter sells weed to go to school, and then the mother stole the weed and sold it to buy crack.”

Black Christianity, while it uses the same iconography and language as white Christianity, is very different. It clings ferociously to the cross. “The cross is a paradoxical religious symbol because it inverts the world’s value system with the news that hope comes by way of defeat, that suffering and death do not have the last word, that the last shall be first and the first last,”42 writes the theologian James Cone in The Cross and the Lynching Tree. And this belief is absurd to the intellect, yet, as Cone points out, “profoundly real in the souls of black folk.” The crucified Christ, Cone writes, for those who are also crucified, manifests “God’s loving and liberating presence in the contradictions of black life—that transcendent presence in the lives of black Christians that empowered them to believe that ultimately, in God’s eschatological future, they would not be defeated by the ‘troubles of the world,’ no matter how great and painful their suffering.”

Cone elucidates this paradox, what he calls “this absurd claim of faith,” by pointing out that to cling to this absurdity was possible only when one was shorn of power, when one was unable to be proud and mighty, when one understood that he or she was not called by God to rule over others. “The cross was God’s critique of power—white power—with powerless love, snatching victory out of defeat.”

Lolly Davis lives in one of the brick row houses on Emerald Street, some of which have been refurbished through Father Doyle’s Heart of Camden project. Other brick and wooden row houses on her street, a block from Sacred Heart, bear the scars of decay and long abandonment. There is a pungent smell of garbage. Davis, whose blood pressure had recently shot up and whose kidneys shut down, is home from the hospital. Her twenty-one-year-old adopted grandson, nicknamed Boom Boom, or Boomer, answers the door and says his grandmother will be right down. The white blinds are closed on the front window. The living room, with its two beige couches, matching armchair, and a large flat-screen television, is dim. There is a stone fireplace with a mantle crowned with family photos. Rain lashes the window. Boomer finished a special education program last year. He is a heavy young man and wears an orange T-shirt and blue shorts. He is making a peanut butter and jelly sandwich in the kitchen.

Lolly gingerly makes her way down the stairs. She settles into an armchair and begins her story. 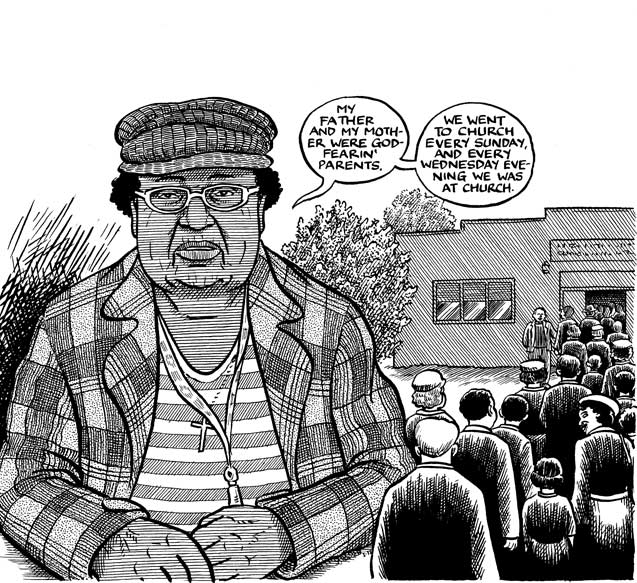 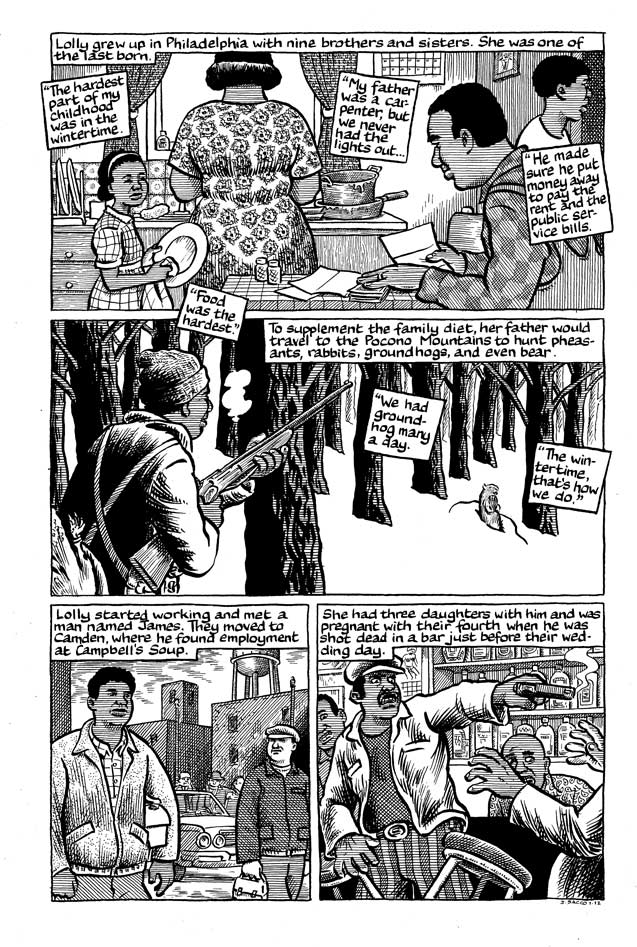 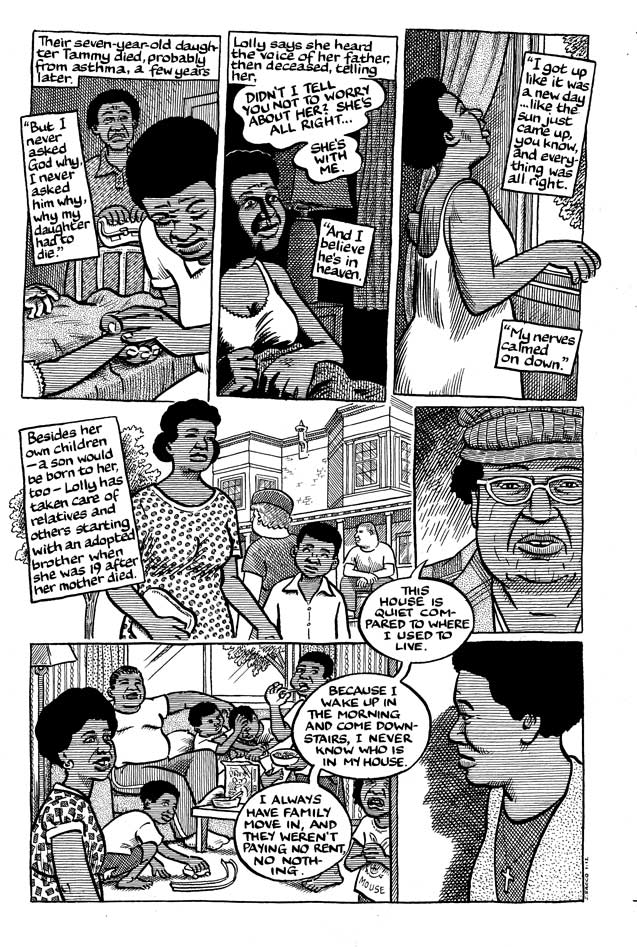 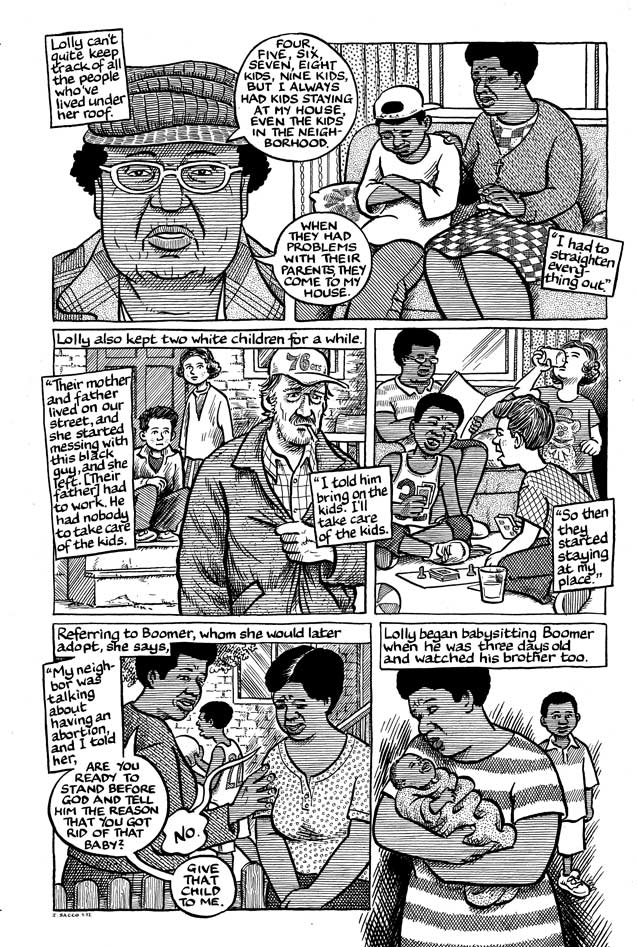 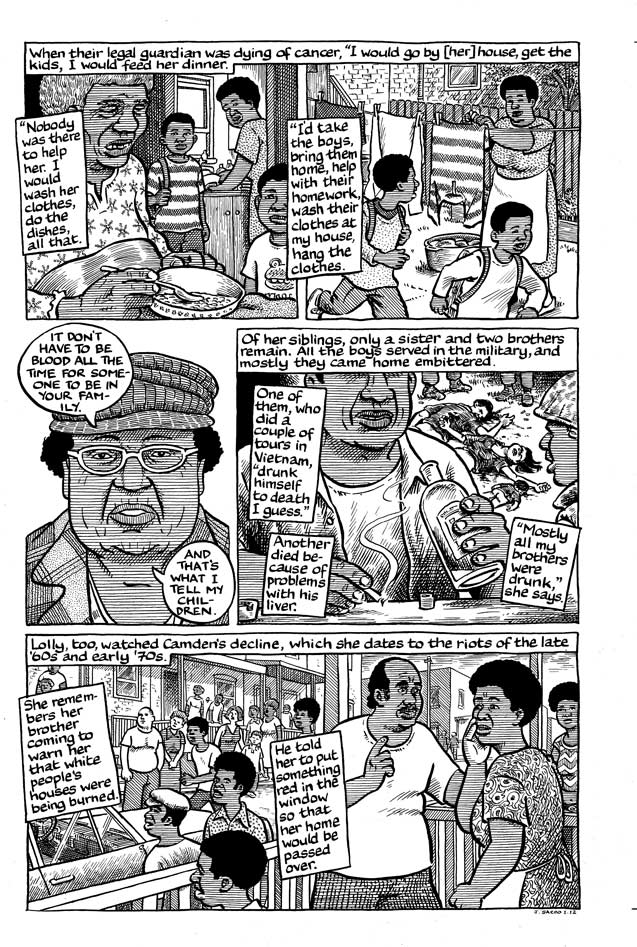 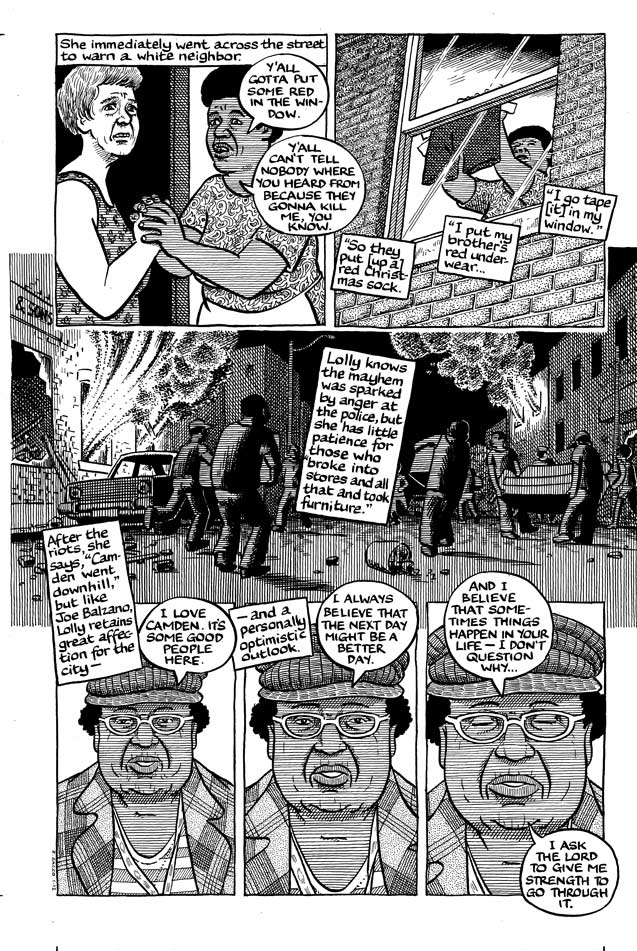 Excerpted with permission from Days of Destruction, Days of Revolt, by Chris Hedges and Joe Sacco. Available from Nation Books, a member of The Perseus Books Group. Copyright © 2012.

Joe Sacco is widely hailed as the creator of war-reportage comics. He is the author of Palestine, Footnotes in Gaza (winner of the Ridenhour Book Prize), and Safe Area: Gorazde.