President Obama made what should be an uncontroversial statement the other day. He told a Spanish language television station that Venezuelan leader Hugo Chavez does not pose a serious threat to the United States.

Unless flamboyant language is considered a threat, there’s little to argue with Obama’s statement. Venezuela has not engaged in or threatened to engage in any actual armed hostilities with the United States (the U.S. is suspected to have been a major force behind a 2002 military coup against Chavez), is a major U.S. trading partner, and has a tiny military budget (as Obama pointed out in 2009).

But South Floridan politicians, many of whom pander to the right-wing Cuban exile lobby, pounced on Obama’s statement.

“Simply put, this President is unfit for duty when it comes to understanding freedom and national security in the Western Hemisphere, and neither are his liberal allies who allow such behavior,” thundered the campaign of U.S. Representative Connie Mack, who is vying to be the next Republican Senator from Florida.

Groups dedicated to creating conflict between the Latin America left and the United States are likely cheering Mack’s alarmism. After all, they’ve paid his chief of staff and campaign manager, Jeffery Cohen, well for this service to their cause.

I went to the U.S. Capitol to look up Mr. Cohen’s financial disclosures. I found that in the period of time between 2009 and 2011, after he left his role as Connie Mack’s chief of staff and before he once again returned in the same role, Cohen worked as a private consultant, and he was paid hundreds of thousands of dollars by a firm that manufactures grassroots campaigns, and another group that works on foreign elections, and tens of thousands of dollars by anti-Chavez groups.

Here’s a scanned sheet of his financial disclosures: 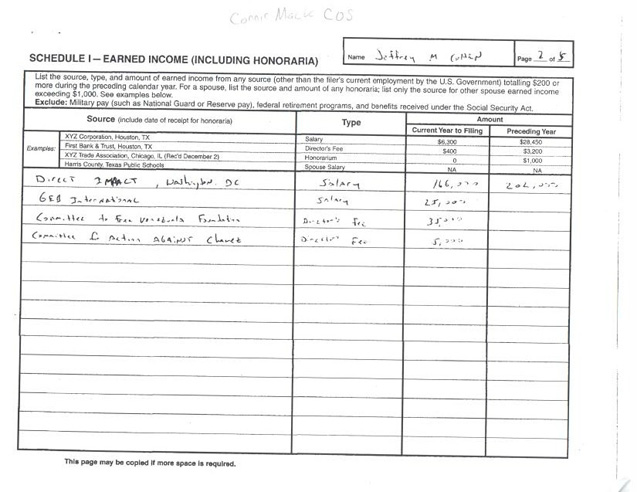 In this time period, he received $368,000 from Direct Impact, an elections and astroturf firm, $25,000 from GEB International, which is dedicated to “electing world leaders around the globe” (although it keeps its client list confidential), $35,000 from the anti-Chavez Committee to Free Venezuela Foundation, and $5,000 from the Committee for Action Against Chavez.

This isn’t to say there aren’t legitimate criticisms of Chavez’s human rights record — or that of any other Latin American country, like closely allied right-wing Colombia. But the alarmism with which the American right approaches Chavez and the rest of the Latin American left may sometimes be more about pandering to special interest lobbies than it is legitimate concern for American security or values.