As tear gas hung over protesters Sunday in Ferguson, Missouri, parallel feelings of being worn down and dehumanized by ongoing police violence on communities of color hung over the hundreds of people who came out to demonstrate in Los Angeles.

The August 17 protest outside Los Angeles Police Department headquarters downtown was both in solidarity with Ferguson and to demand accountability for the deaths of 25-year-old Ezell Ford and 37-year-old Omar Abrego – an unarmed black man and unarmed Latino – at the hands of LAPD officers within the span of a week. 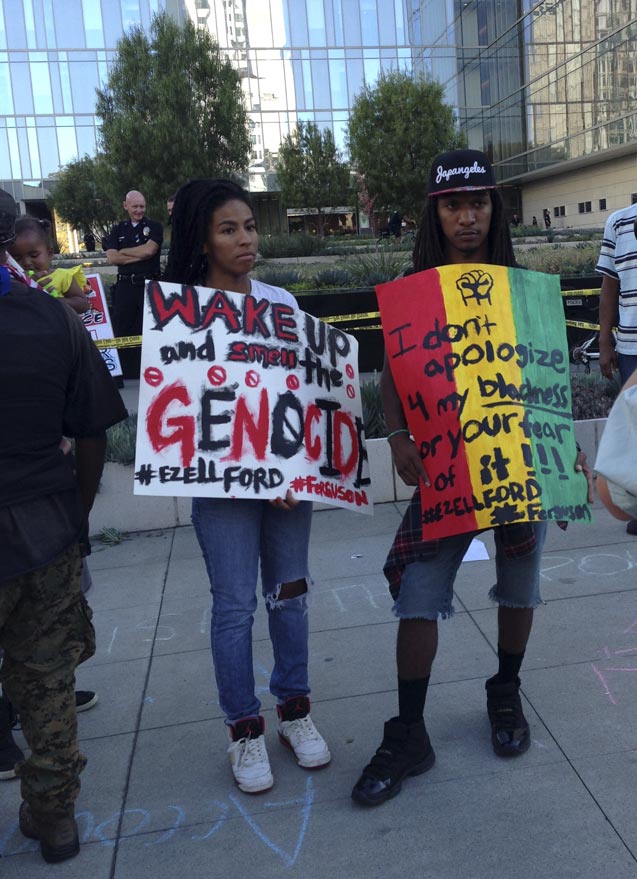 Their deaths happened to coincide with mass protests and heavily militarized police suppression in Ferguson after Officer Darren Wilson shot unarmed teen Michael Brown six times on August 9, killing him. Missouri Gov. Jay Nixon has called a state of emergency after continuous protests, public anger and unrest, and has called in the National Guard.

Tears filled the eyes of Tiara Marshall, a 24-year-old Angeleno, as she explained why she decided to join the protest on Sunday.

“I’m just tired of them killing people,” she said, her voice trembling. “It makes you scared. I have brothers. The stuff you have to tell them, a white mother doesn’t have to tell her son: like ‘go straight home,’ ‘don’t have your hands in your pockets,’ ‘don’t wear a hoodie.'”

In recent days, Ford and Brown joined the long and chilling list of unarmed men of color killed during encounters with law enforcement officers.

While there is currently no national database that tracks police killings, downtown Los Angeles resident Greg Kennedy, 23, said it seems like things have gotten much worse even though it’s hard to find accurate information.

“It’s gotten drastically worse, I would say. I am afraid to leave my home,” Kennedy said. “As a citizen in America, somebody who was born here, I feel like our rights don’t have any leverage; they don’t mean anything and it’s a scary time to be in.”

But it’s not just killing that brought people to the streets on August 17. Many shared stories of chronic racial profiling and harassment that take tolls on lives and emotional health. Being pulled over, made to get out of the car, being stopped as pedestrians, handcuffed and searched, are regular occurrences for working people with families trying to go about daily existence, protestors said. 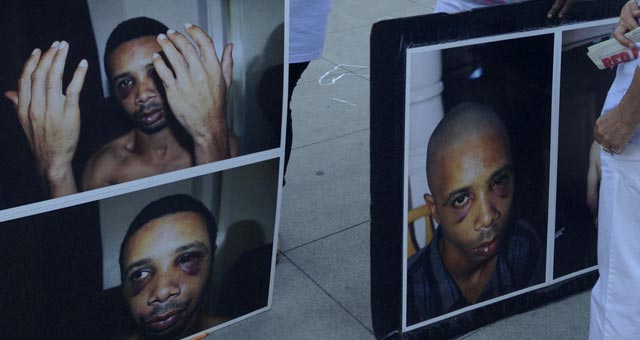 Family members of Barry Montgomery, who is disabled, say a group LA County Sheriff’s deputies from the department’s Compton station beat Montgomery until he was unconscious. (Photo: Bethania P. Markus)

Many of those in attendance in Los Angeles were parents with small children who feared their own little ones would one day grow up to face the same kind of fear, harassment and lethal force meted out to Ford, Abrego, Brown and the people of Ferguson. They want change before that happens.

Tyrone Ervin, 33, came all the way to Los Angeles from Redlands. He had never been to a protest before.

“I have two sons, and I don’t want them to go through some of the same stuff that I’ve gone through,” Ervin said, speaking of his children aged 2 and 3. “It all starts with harassment, with the profiling. I’ve been pulled over probably 60 times, but I’ve only gotten four tickets in my life.”

“[I’m] always getting pulled out of the car, always questioned,” he said. “I’m just tired of it. I think the majority of people are tired of it.”

Alusine and Natacha Bangura came from the San Fernando Valley neighborhood of Pacoima. They have three young children.

“I don’t let them walk to the store alone now because they’re too young. But as they get older, I’m worried about whether or not they’re safe from the police,” Natacha said, of her two sons. “When he’s 19, it’s going to be more dangerous than when he’s 9. And that’s sad.”

Natacha said she doesn’t let her husband go anywhere except to work and back because his experiences with police have haunted her. Once, she said, he got pulled over for playing loud music and six police cars showed up.

Alex Sagastume, a 40-year-old Latino from Monterey Park, a Los Angeles suburb, said he is afraid of police because of violent episodes in the past. “I don’t want to be afraid no more. I want to walk the streets in peace.”

Sagastume said when he was 13 years old, a Vernon police officer beat him with a baton, punched and kicked him and jumped on top of him, then took him into custody.

“My tooth went straight through here,” he said, showing a scar on the inside of his right cheek.

Four years ago, Sagastume said, he was at a New Year’s party when police showed up. He took off and went into his house. They followed him, kicking in his front door and the door to his bedroom. He said they handcuffed him on his bed and tased him while he was facedown. Now he feels that “at any moment interacting with the police anything could happen. I could be shot.”

“It’s tough to talk about it and to relive the whole thing,” Sagastume said, his voice choking. “It’s just, I just want justice. It’s too much. This has affected me. I’m 40 years old. Since I was 13, it has affected me in my mind to this day. I don’t feel equal; I feel like I should be afraid; I feel like I should just stay home and not deal with the police. I just want to just end this all. Equality for everybody.”

The Sunday afternoon protest was orderly, but full of anguish and spirit. After a rally in front of the police department headquarters, demonstrators took the streets, and then dispersed home. LAPD officers were restrained, wearing their regular uniforms and not riot gear. They largely stayed behind yellow tape that separated the headquarters from the public sidewalk. While an officer was on foot accompanying the march and cops blocked traffic to facilitate it, none were seen coming forward to talk to demonstrators about their grievances.

And there were many.

Los Angeles resident Bruce Johnson said he has been stopped four times in a month’s time. The last time LAPD stopped him, he was sitting on the sidewalk, hot and tired, and on his way to work.

“Last weekend, they pull up and ask me where I’m going,” he recounted. “I say I’m going to work, where do you expect me to be going? They ask me if I’m on parole or probation. Because I’m black, do I have to be on it? There’s no justice for people like us.”

Johnson, a US Army veteran of the Vietnam War, said he got a $200 ticket for sitting on the sidewalk. Instead of simply asking him to move, the officer was searching a database to see if Johnson had any warrants.

“It’s a source of aggravation that now has graduated to a level of a severe amount of exhaustion,” said Wesly Peterson, 25, of Whittier. “I am much more well-educated in the law, not because I had a general interest, but because I needed to know what my rights were when I was stopped. They’ve gotten away with very, very illegal forms of detainment and arrest with me because I was a teenager and I wasn’t aware of my rights.”

His friend Kevin Gunn, 21, said he has been pulled over “eight or nine times.”

“They always want to ask you to get out of the car and all this extra stuff, and you know you’re not doing anything wrong,” Gunn said. 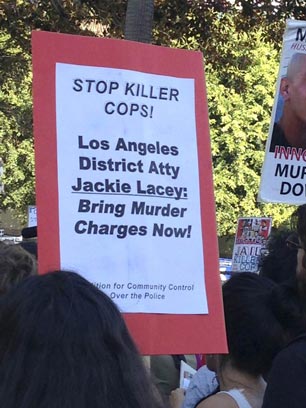 (Photo: Bethania P. Markus)The recent police shootings have galvanized people to take action. Another protest is scheduled for August 21 at 3 pm in front of Los Angeles County District Attorney Jackie Lacey’s office, demanding prosecutors file charges against the officers involved in Ford’s and Abrego’s deaths. Activists are coordinating a “Black Lives Matter Ride,” which will mirror the Freedom Rides during the civil rights era, over the Labor Day weekend from various locations to Ferguson.

“The white guy Cliven Bundy, on the ranch – they’re standing there in opposition to the government with someone who’s doing something illegal,” he said.

Bundy confronted federal agents who came to his ranch earlier this year after he refused to pay fines for illegally grazing his cattle on federal land. Soon after, a militia of heavily-armed, mostly white people hunkered at his ranch, going so far as to set up armed checkpoints in the area.

“He said ‘oh, my family’s been here so long.’ I can’t say that,” Ervin continued, and motioned to his friend Darryl Douglas. “Imagine if I said that and we were both strapped to the teeth with shotguns and AR15s, and bullets around us. We would be revolutionaries; we would be violent; we would be radicals. And we would be dead.”

In light of the growing movement, and accompanying chaos in Ferguson and anger simmering in Los Angeles, Douglas had some prophetic-sounding words:

Share
Copyright, Truthout. May not be reprinted without permission.
Bethania Palma Markus