Progressive groups threw a one-two punch at the nation’s richest banks on Monday. A coalition of watchdogs and activists released a new report revealing how the wealthiest bailed-out banks have caused the current economic crisis by dodging taxes, and hundreds of demonstrators rallied in Washington, DC, to demand the attorneys general of all 50 states file criminal charges against banks that are suspected of committing foreclosure fraud during the nation’s housing crisis.

At least 600 demonstrators gathered outside the National Association of Attorneys General (NAAG) spring meeting to demand tough settlements on foreclosure fraud cases resulting from a NAAG investigation into several banks’ practice of signing foreclosure documents without checking for accuracy – a practice the NAAG calls “robo-signing.”

The demonstrators – many of them homeowners – also occupied and successfully shut down a Bank of America branch before occupying the offices of Sen. Mitch McConnell (R-Kentucky) and House Speaker John Boehner (R-Ohio). Click here for scenes from the protests.

NAAG launched the investigation in October 2010, but has yet to take action against banks like Bank of America and JP Morgan Chase that were suspected of systematically robo-signing foreclosure documents before the scandal made headlines. 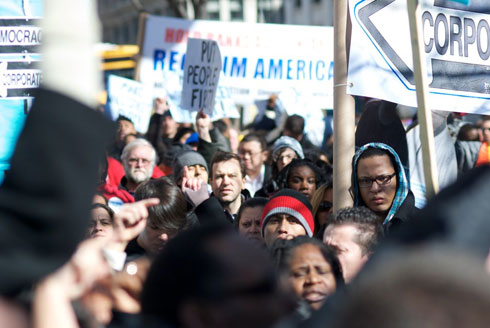 Iowa Attorney General Tom Miller led the investigation, and the National Peoples Action (NPA) and other groups have since met with Miller to demand state attorneys general file criminal charges against banks guilty of robo-signing foreclosure documents and secure restitution for Americans who have already lost their homes in illegal foreclosures.

NPA affiliated activist Keya Hicks said that, in earlier meetings with activists, Miller agreed to file criminal charges against banks that issued illegal foreclosure documents. During the rally, Hicks and other community activists entered the NAAG spring meeting in hopes of talking with Miller about the results of the robo-signing investigation, but the activists were told several times that Miller was not available.

A NAAG spokesperson did not respond to an inquiry from Truthout, but Hicks said NAAG representatives have signaled that the results of the investigation should be available soon.

The rallies outside of the NAAG meeting and outside nearby bank branches coincided with the launch of the Make Wall Street Pay campaign. The campaign released a new report detailing how the nation’s richest banks dodged taxes and caused $300 billion in tax revenue shortfalls in federal and state governments that could have helped average Americans during a time when politicians are aggressively cutting funding to the public sector. 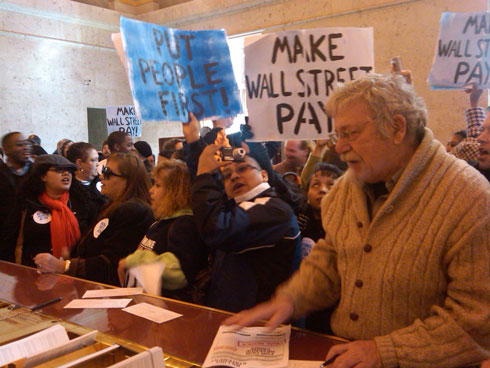 The report, released on Monday by the NPA and the watchdog group the Public Accountability Initiative, reveals startling figures on the same super-rich Wall Street firms that received billions in federal stimulus monies when the economic crisis began.

Among the report’s key findings: