I see that the economist Nick Eberstadt has written more about America’s moral collapse on the American Enterprise Institute’s Web site. Eberstadt, readers may recall, was responsible for the “nation of takers” meme that did so much to ensure victory for … Barack Obama.

What I think is interesting is that, according to his article, of the three terrible trends Mr. Eberstadt claims to see, he’s right about two: traditional families are indeed in decline; so is traditional organized religion (but growing dependence on government is mostly a myth).

From these declines Mr. Eberstadt concludes that we are in danger of social collapse. But what he somehow misses is that the notion that traditional families and religion are essential to social order is a theory, not a fact — and it’s a theory that is overwhelmingly refuted by recent experience. 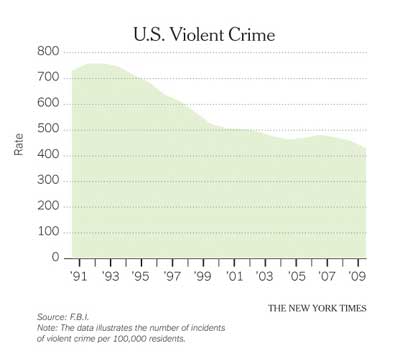 I look at the United States in the 2013 of the Common Era — notice my war on Christianity — and see the healthiest society, in some key dimensions, of my adult life. Consider a couple of objective indicators: teenage pregnancy is declining, according to federal statistics, as is violent crime (see that chart on this page).

Weren’t we supposed to be in “Escape From New York” territory right now? Instead, New York in particular is a nicer, cleaner, safer place than anyone imagined possible a couple of decades ago.

And yes, I’m aware that this also means that inequality can’t be quite as corrosive as some liberals, myself included, sometimes imagine.

But back to Mr. Eberstadt: his whole argument is based on the presumption that society is doomed if the traditional — and, I think it’s fair to say, patriarchal — structure isn’t maintained without change. Let people co-habit, maybe even marry others of the same sex, choose their faith or choose not to have any faith, and we will degenerate in a Hobbesian nightmare. We used to point to Scandinavia as a counter-example, but the reply would be that their homogeneous societies (not really, but that was the legend) were nothing like ours. But now we’re a cohabiting, free-love, free-religion dystopia too — and it’s O.K.

Why do they hate America?

Where Do ‘Facts’ Come From?

Just a quick observation: for the past couple of days I’ve been seeing in a lot of places, including the comments on my columns, the assertion that federal spending has risen 37 percent under President Obama — that specific number.

Obviously this is coming from somewhere, and being broadcasted by Rush Limbaugh or somebody. But it’s still kind of amazing how a totally wrong number can become part of what everyone on the right just knows to be true.