Two Tea Party leaders, Mark Meckler and Jenny Beth Martin, have been jet-setting all over the country ginning up support for conservative politicians. Literally.

They’ve been flying around in a private jet like Wall Street CEOs, except they’re heading to “grassroots” rallies instead of merger talks. Meckler and Martin don’t say how outraged, ordinary citizens can find the money to support such extravagance, and they don’t have to. Thanks to the Supreme Court’s ruling in this year’s Citizens United v. the Federal Election Commission, they can now accept unlimited funding without disclosing the identities of their donors.

No one would even know about the jets themselves, but Meckler and Martin never counted on Mother Jones, or a reporter named Stephanie Mencimer. Using public flight-tracking information, the Tea Party Patriots’ flight schedule, and some serious attention to details in the group’s own videos, Mencimer was able to figure out which jet the not-so-populist duo were using. She then traced the plane to Raymond F. Thomson, founder and CEO of a semiconductor company called Semitool, which he sold last year for a cool $364 million.

It’s both sad and hilarious to see the secret financial arrangements of the super-rich masquerading as grassroots activism. But it also shows the lengths to which reporters must go to actually report on political spending in the wake of Citizens United. There is no documentation to follow, just the contrails of private jets.

And while secret political spending has been dominated by big corporations this cycle, the legal maneuvering that liberated corporate coffers was actually performed by fringe right-wing groups targeting social issues. As Jesse Zwick emphasizes for The Washington Independent:

Groups advocating against abortion and gay marriage have waged a low-grade war on laws restricting their ability to spend money freely in elections since the early 1980s, and their victory in the recent Citizens United ruling has hardly caused them to rest on their laurels.

Our democracy is now more beholden to corporate greed than ever, but at least gays won’t be allowed to visit each other in the hospital.

This is Just the Beginning of Corporate Rights

But the implications of Citizens United extend far beyond the (critically important) realm of campaign finance itself, as Jeff Clements and John Bonifaz of the organization Free Speech for People emphasize in an interview with Amy Goodman and Juan Gonzales of Democracy Now! As Bonifaz notes:

At its core, Citizens United grants First Amendment rights to corporations on the grounds that corporations are people, just like ordinary citizens. Sound crazy? It is.

The Bill of Rights for Corporations?

A Visual Map of Campaign Cash

What are the most common themes and issues surrounding the untold amounts of cash flowing into this election cycle? To create that visual, the Media Consortium piped 10 articles by our members through Wordle. While all the articles were generally focused on this topic, they were picked at random and published between October 25-29. 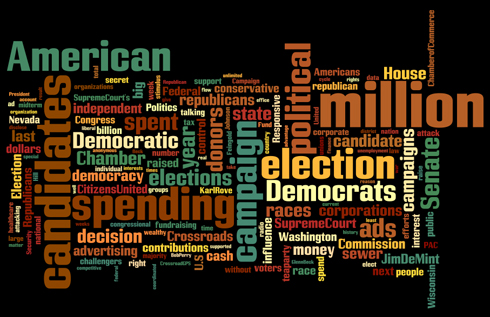 For clarity’s sake, we made “Tea Party” “TeaParty,” “Supreme Court” became “SupremeCourt,” and we also merged the first and last names of key players such as Karl Rove and Jim DeMint. Finally, we removed any extraneous words such as “the,” “and,” and “even.” We did not combine the words corporate/corporation/corporations or Republican/Republicans (but examine the frequency as much as the size). To get the latest reporting on the funds feeding into the mid-term elections, go to www.themediaconsortium.org or follow the search term #campaigncash on Twitter. Wordle research by Amanda Anderson.