Dear Dr. Dollar:
Why has our economy switched so greatly away from manufacturing that produces real goods and services that provide real value and towards speculative, financial activity—everything from mergers and acquisitions to derivatives, off-shore tax shelters, and other scams?
—Glen W. Spielbauer, Dallas, Tex.

The rising role of finance has certainly had all of these impacts (the “scams” you mention). Also, the switch to finance was at the center of the housing bubble, the collapse of the bubble, and the onset of the Great Recession. The switch to finance, however, was not a switch of the economy as a whole; that is, financial firms do not account for a growing share of output (GDP) or employment. The long-term decline in manufacturing has been balanced by the expansion of “services that provide real value”—education and health care, for example.

Profits of Financial Firms, Percent of All Corporate Profits, 1965–2012 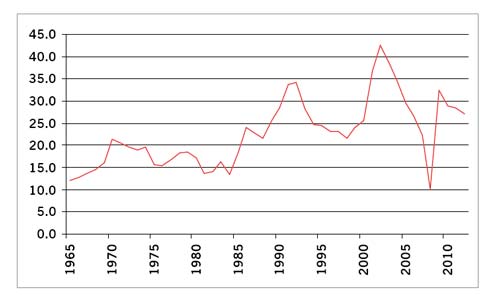 Several factors, intertwined with one another, account for the rise of financial profits. One factor has been the generally slow growth of the U.S. economy since the 1960s. Slower growth reduced the opportunities within the United States for profitable investments in real production. So firms and people with money shifted towards financial investments.

At the same time as the economy was growing less rapidly, a larger share of income was being captured by people with high incomes—apparent in both the greater income inequality among households and the smaller share of income going to labor as opposed to capital (i.e., profits, rent, and other forms of property income). So as opportunities for profits from real investment were poor, firms and wealthy people had more money to invest.

These changes were both cause and effect of a shift in class power, as the high-income segment of the population had an increasing impact on government policy—both directly and through the corporations they controlled. They used this power to establish policies that weakened labor (e.g., undermining labor unions and the minimum wage) and gave greater leeway to the operations of firms (deregulation).

Deregulation was beneficial to firms in many sectors of the economy, but was especially important for the financial sector. Financial firms were able to undertake all sorts of highly risky—but also highly profitable—activities, such as the speculation in derivatives that set the stage for the Great Recession. Formal deregulation and the informal deregulation through lack of enforcement of still-existing regulations allowed the expansion of fraudulent activity, especially, for example, in making mortgages.

The rapid development of information technology also played a role. The advent of the computer age made it possible for financial firms to engage in actions that were not possible in an earlier era. For example, the explosion of the market for complex new financial instruments like “credit default swaps” and “collateralized debt obligations” and the advent of high-frequency trading in which nano-seconds matter could not have taken place without computer technology.

The switch to finance has been quite damaging. Speculative activity involves a real waste of resources—both capital and skilled labor that might be used for socially valuable production. Financial firms and their apologists claim that the firms make a socially valuable contribution by allocating capital to activities where it is most productive. But any examination of their activity shows that much, if not most, is no more productive than other forms of gambling—it is essentially rigged gambling. (See Doug Orr, The Big Casino.) Also, the shift to finance has made a significant contribution to income inequality, with the firms’ executives making up a substantial share of the infamous 1%. And along with all this, there is the role of finance in generating the Great Recession. Not a pretty picture.