© 2022 Truthout
News
What Voters Really Care, and Don’t Care, About

I stopped watching the Nov. 3 postelection press conference after President Obama declared that Americans rejected Democrats at the polls in part because “we were in such a hurry to get things done that we didn’t change how things got done.”

Nobody cares about this stuff — voters only care about results. Nobody really cares about earmarks, which is just political code for spending less (less on somebody else).

They don’t care about civility and bipartisanship, which in practice are code for Democrats’ giving in to Republican demands.

Nobody cares about congressional maneuvers — some pundits may argue about the role health-care reform played in the midterm elections, but I bet not one American voter in 50 knows or cares that it was passed using a filibuster-preventing reconciliation measure. So were the sacred 2003 tax cuts approved during President George W. Bush’s administration that we are told must, absolutely must, be retained. If Mr. Obama had used some fancy footwork and held 2 a.m. sessions in order to pass a big public-works program in the United States, and this program had brought unemployment rates down, Republicans would be screaming about the process, but Democrats would have comfortably held control of Congress.

And nobody cares about the national deficit, either. People sometimes say they do, but it almost always turns out that they really mean something else. Look at all the fiscal hawks who suddenly lose all interest in balancing the budget when tax cuts are on the line.

One clear result of the elections is that there won’t be a further round of stimulus spending.

And this, in turn, means that the narrative of the Very Serious People will now be: that sort of fiscal policy was tried, it failed, and that’s that.

But the facts don’t at all support the conventional wisdom.

You often hear the United States’s experience compared to that of Germany, for example. According to the widely accepted narrative, the United States went for Keynesian policies, while Germany chose austerity — and Germany did better.

Germany has not, in fact, done better in terms of gross domestic product. Just look at the chart. It is true that Germany did do better on employment, but this is due to policies that American conservatives surely don’t support, including employment subsidies, strong unions and rules making it difficult to fire workers. 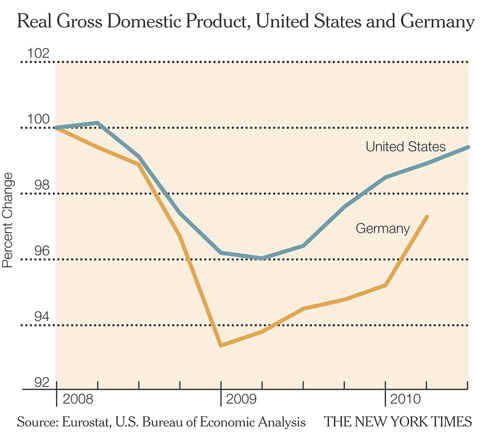 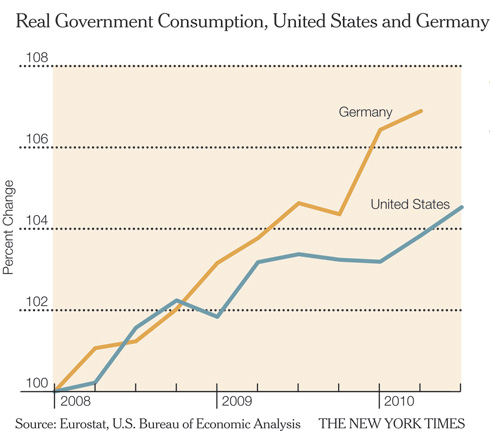 You will find that Germany was actually more Keynesian than the United States. (Just to be clear, I am not saying that the Germans were big Keynesians; the point is that neither nation was.)

After the Nov. 2 midterm elections were over, the United States Senate remained in Democrats’ hands — just barely, with Democrats holding 53 of 100 seats. The Republicans, however, took control of the House of Representatives with a strong majority, and since most of these victories were based on anti-deficit, anti-stimulus campaigns, a shift in direction is likely for the nation.

Immediately after the votes were counted, Republicans vowed that once they take office in January, they will challenge Democrat-led initiatives. At the top of the list is dismantling President Barack Obama’s health-care reform bill, which was passed in March and is expected to cost the government about $938 billion over a decade. Mitch McConnell, the Republican minority leader in the Senate, has proposed immediate repeal of the bill, urging the House to deny its funding and the Senate to eschew some of its provisions. Shortly after the election, Representative John A. Boehner, the next speaker of the House, called the bill a “monstrosity,” that “will kill jobs in America, ruin the best health-care system in the world and bankrupt our country.”

The newly empowered Republicans also pledged to slash spending for domestic programs immediately, by about $100 billion within a year.

While debates on health care and spending cuts could lead to stalemates, one argument that will likely go the Republicans’ way is an extension of tax cuts for the wealthy, which are due to expire at the end of the year. Mr. Obama opposes extending them for the wealthiest American taxpayers.

Donate Now
Share
Paul Krugman
Truthout
Share
I stopped watching the Nov. 3 postelection press conference after President Obama declared that Americans rejected Democrats at the polls in part because “we were in such a hurry to get things done that we didn’t change how things got done.” Nobody cares about this stuff — voters only care about results. Nobody really cares about earmarks