Excluding Census workers, job growth has just kept pace with the growth in the labor force over the last 3 months.

The unemployment rate fell to 9.7 percent in May, primarily as a result of 411,000 temporary Census jobs. The Census hires pushed total job creation for May to 431,000, however the addition of 20,000 non-Census jobs is down sharply from the 217,000 reported for April. Excluding the temporary Census hires, the economy has generated 132,000 jobs a month over the last three months, just a bit more than the amount needed to keep pace with the growth of the labor force.

The weakness in job creation spread across sectors. Construction is again shedding jobs, losing 35,000 jobs in May after showing gains the prior two months. Some of this may have been weather related, with increases in March and April reflecting a bounce-back from the bad weather in February. Employment in the sector is likely to stabilize soon.

Manufacturing continues to be a bright spot, adding 29,000 jobs, all of them in the durable sector. Auto manufacturing added 9,300 jobs. 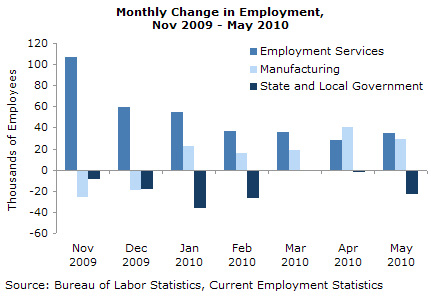 Another bright spot on the establishment side is a 0.1 hour increase in the duration of the average workweek. It is now up by 0.5 hours from its low last October. This is a substantial increase in the demand for labor and could suggest more hiring is imminent. Of course, hours are poorly measured and some of this increase may simply be noise in the data.

The picture in the household data is very mixed. While the unemployment rate dropped, the employment rate also slipped by 0.1 percent as the labor force was reported as shrinking by 322,000. This likely reflects noise rather than a real decline in the labor force. As noted before, since October, employment growth in the household survey has hugely exceeded jobs growth in the establishment survey. That was likely an aberration that is being reversed.

The length of unemployment spells continued to increase, no doubt in part because of the unusually long duration of benefits. As noted before, this likely affects the mix of the unemployed, not the number.

Two pieces of good news in the survey were the 388,000 decrease in the number of workers involuntarily working part-time and the continued increase in the percentage of unemployment due to people voluntarily quitting their job. However, the 6.5 percent share is still very low.

This report is a clear warning that the recovery is very weak. The weakness is in spite of the temporary stimulus provided by the hiring of 550,000 Census workers. With house prices falling again, severe state and local budget cutbacks looming, and troubles in Europe dampening exports, the future is not bright.

Dean Baker is co-director of the Center for Economic and Policy Research in Washington, DC. He is frequently cited in economics reporting in major media outlets, including the New York Times, Washington Post, CNN, CNBC, and National Public Radio. He writes a weekly column for the Guardian Unlimited (UK), and his blog, Beat the Press, features commentary on economic reporting. His analyses have appeared in many major publications, including the Atlantic Monthly, the Washington Post, the London Financial Times, and the New York Daily News. He received his Ph.D in economics from the University of Michigan.